So far, we have discussed the major elements and types of bonds that are important in the functioning of a cell. Together these elements and bonds define the major properties of the four classes of macromolecules that make up a cell: carbohydrates, proteins, lipids and nucleic acids. In this module, we will explore these macromolecules.

Carbohydrates, proteins and nucleic acids are all examples of polymers. Polymers are very large molecules composed of smaller units joined by covalent bonds using a common set of chemical reactions. Proteins are linear polymers of amino acids all joined by peptide bonds. Polysaccharides are the carbohydrates joined through glycosidic bonds in sometimes quite complex branched structures. DNA and RNA are polymers of nucleic acids linked by phosphodiester bonds. This module includes a discussion of the structures of these organic macromolecules.

The simplest of the macromolecules are carbohydrates, also called saccharides. The name is descriptive of the character of this class of molecules, since they all have the general formula of a hydrated carbon.

This represents a 2:1 ratio of hydrogen to oxygen atoms(as in water)but in this case, they are attached to a carbon backbone. the constituent atoms of carbohydrates can be configured in virtually endless configurations, so carbohydrate molecules come in a multitude of different shapes and sizes.

Monosaccharides are the most basic units of carbohydrates. These are simple sugars, including glucose, fructose, and others. They contain between three and seven carbon atoms, have a sweet taste and are used by the body for energy.

Polysaccharides can be conjugated with other macromolecules. For example, complex carbohydrates can be linked with proteins or lipids to form glycoproteins and glycolipids, respectively. Very different structures can be made from a few monosaccharides arranged in different patterns and with different bonding. This flexibility in structure can therefore be used for identification of individual cell types, since the structure of each cell type is unique. More than half of the proteins in the body, which we will discuss later in this module, have glycosylations or carbohydrate modifications. The outside of cells are covered in carbohydrates from modifications of lipids that make up the membrane; we will cover lipids in the last chapter of this section.

Carbohydrates are best know as energy storage molecules. Their primary function is as a source of energy. Cells readily convert carbohydrates to usable energy. You will recall that molecules are a collection of atoms connected by covalent bonds. In general, single covalent bonds can be represented as having approximately 100 kcal/mol of energy associated with the force that holds the two atoms together. Table sugar, or sucrose, is the best-known carbohydrate. The most common carbohydrate in nature is glucose, which has the general formula

and which is a common source of energy for many living organisms. If a mole of glucose is completely metabolized ("burned") for its energy in a cell, it has the following chemical reaction:

While the overall reaction represents a coupled oxidation/reduction process, on balance this process involves the breaking of five carbon-to-carbon bonds per glucose molecule, with the release of 673 kcal/mol of energy.

However, the body does not need dietary carbohydrates for energy. Proteins and fats can meet the body's needs, and the body can convert molecules into carbohydrates needed for energy and other cellular functions. But carbohydrates require minimal processing for use as energy. For example, a simple enzymatic reaction converts sucrose into blood sugar, which can be used directly as a source of cellular energy. The trick for the cell is to convert the 673 kcal/mol of energy to a useful form so that it can do work for the cell or organism. The metabolic fate of the carbohydrate will be discussed later in the course. 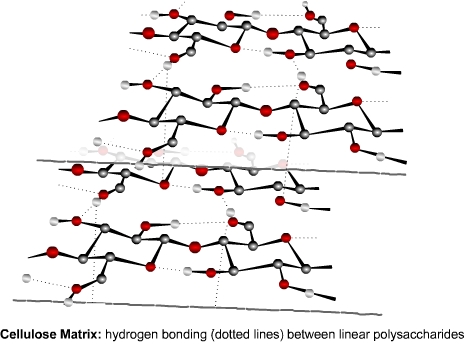 Carbohydrate modifications (called glycosylations) are present on lipid membranes and proteins for specialized function and recognition. Unique carbohydrate formations allow even more specificity to a protein, beyond just the amino acid code. The outer membrane of the cell is dotted with carbohydrate chains, which differ according to cell type. These carbohydrate glycosylations provide a "signature" of the cell and can also act as a signal. Thus, glycosylations are important in immune response and general cell-to-cell communication.

After nucleic acids, proteins are the most important macromolecules. Structurally, proteins are the most complex macromolecules. A protein is a linear molecule comprised of amino acids. Twenty different amino acids are found in proteins. The sequence of a protein's amino acids is determined by the sequence of bases in the DNA coding for the synthesis of this protein. A single protein molecule may be comprised of hundreds of amino acids. This sequence of amino acids is a protein's primary structure. The protein's size, shape and reactive properties depend on the number, type and sequence of amino acids. The amino acid chain can remain in its primary linear structure, but often it folds up and in on itself to form a shape. This secondary structure forms from localized interactions (hydrogen bonding) of amino acid side chains. These include alpha helix and beta sheet structures. The alpha helix is dominant in hemoglobin, which facilitates transport of oxygen in blood. Secondary structures are integrated along with twists and kinks into a three-dimensional protein. This functional form is called the tertiary structure of the protein. An additional level of organization results when several separate proteins combine to form a protein complex—called quaternary structure. 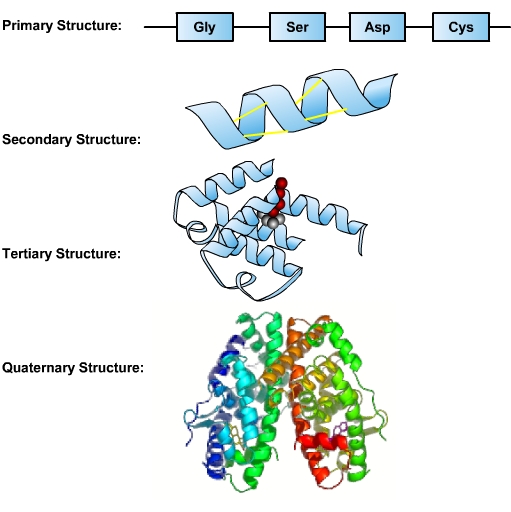 Proteins perform numerous essential functions within the cell. Many proteins serve as enzymes, which control the rate of chemical reactions, and hence the responsiveness of cells to external stimuli. An enzyme can fast-forward a reaction that would take millions of years under normal conditions and make it happen in just a few milliseconds. Enzymes are important in DNA replication, transcription and repair. Digestive processes are also largely facilitated by enzymes, which break down molecules that would otherwise be too large to be absorbed by the intestines. Enzymatic proteins also play a role in muscle contractions.

Other proteins are important in cell signaling and cell recognition. Receptor proteins recognize substances as foreign and initiate an immune response. Through cell signaling, proteins mediate cell growth and differentiation during development. Several important proteins provide mechanical support for the cell, scaffolding that helps the cell maintain its shape. Other proteins comprise much of the body’s connective tissue and structures such as hair and nails.

For protein production in cells the body needs amino acids, which we ingest. It seems a bit inefficient, but we eat proteins, break them down into amino acids, distribute the amino acids inside the body and then build up new proteins. Our cells can synthesize some amino acids from similar ones, but essential amino acids must be obtained from the diet, since they cannot be synthesized. Deficiencies of protein in the diet result in malnutrition diseases such as kwashiorkor, which is common in developing countries. In cases of kwashiorkor, protein deficiency causes edema (swelling) which leads to a distended abdomen. Proteins are eventually metabolized into ammonia and urea, which are excreted by the kidneys. Kidney disease can cause these waste products to accumulate in the body, causing someone to become very ill, ultimately leading to death. A low protein diet can help those whose kidneys have a low level of function.

Unlike nucleic acids, which must remain unchanged in the body for the life of the organism, proteins are meant to be transient—they are produced, do their functions and then are recycled. Proteins are also readily denatured (unfolding of the secondary and tertiary structures) by extremes of heat or pH. When you boil an egg, the yolk and white stiffen and change color. When you cook meat, the flesh changes color and becomes firm. These changes arise because the constituent proteins denature, changing the properties of the tissues.