Water is the basis of life. Without it, life is not possible. Water accounts for up to 75 percent of the weight of the human body. Water provides a relatively stable medium in which chemical reactions can take place. Water’s unique chemical properties (as a solvent with a high boiling point and high heat capacity) make it essential for homeostasis. The body’s thermoregulation relies on water’s high heat capacity to buffer it against swings in external temperature. Cooling of the body is carried out by evaporative water loss—perspiration. Water is also vital as a transport medium. Oxygen is carried by red blood cells suspended in serum, which is mostly water. Nutritional substances are dissolved in water and transported to cells. Water is used to dissolve and dilute waste molecules. If the body is deprived of water for very long, death will result.

Water has several properties that contribute to its suitability to support life as we know it. One of these properties is that water is a polar molecule. Oxygen is more electronegative than hydrogen and draws the electrons that it shares in the covalent bond towards itself. Because water is polar, the partial positive end of one water molecule will be attracted to the partial negative end of a neighboring water molecule. This attraction is called a hydrogen bond. Hydrogen bonding (defined as the attraction of an atom with high electronegativity for a hydrogen atom that is covalently bonded to another highly electronegative atom. This involves the attraction of a hydrogen atom with a partial positive charge to an atom with a partial negative charge. Only hydrogen atoms covalently bonded to a highly electronegative atom can participate in hydrogen bonding.) occurs between partially negatively charged atoms with high electronegativity—oxygen, nitrogen or fluorine—and partially positively charged hydrogen atoms that are bonded to oxygen, nitrogen or fluorine atoms.

Hydrogen bonding, which is referred to as an intermolecular attraction, is a critical interaction within the cell. It is the principal force that holds the tertiary structure of proteins, carbohydrates and nucleic acids together and the overall stability of these molecules is due in part to the cumulative effect of the large number of hydrogen bonds found in the functional structures. Hydrogen bonds are found in and between a variety of molecules. For example, the enormous number of hydrogen bonds between strands of plant cellulose provide the strength and structure of the plant cell wall. As another example, wool (sheep hair) has lots of proteins with an enormous number of hydrogen bonds that provide the curly structure of individual wool fibers. These curly fibers trap air spaces which makes wool such a good insulator. When washed at high temperatures, these hydrogen bonds are broken and the wool fibers will lose their shape, probably damaging any wool clothing. 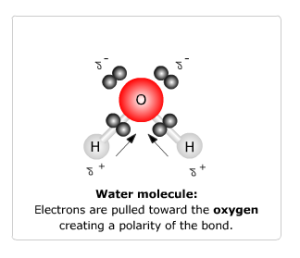 One excellent illustration of the hydrogen bonding is the change in hydrogen bonding of water in ice. These stabilized bonds give ice its crystal-like appearance. Use your mouse on the ice lattice above to explore the network-like formation of weak bonds between molecules. This type of hydrogen bonding also helps large protein structures stabilize.

The attraction between oppositely charged ions in an ionic compound is strong. However, because of the polarity of water, when many ionic compounds are in aqueous solutions they become dissociated into ions. For instance, when an ionic compound such as table salt (NaCl) is dissolved in water, it separates into Na+ and Cl- ions. The water molecules surround the ions to form polar interactions such that the positive ends of the water molecules are arranged around negative ions and the negative ends of the water molecules surround positive ions. Thus the ions become encapsulated by water spheres, which are called spheres of hydration. The biological world is very ionic, and spheres of hydration are important in a cell because they maintain the separation of the many ions of the cell from each other. The sphere of hydration must be broken in order for binding to take place with a specific binding partner.

The nature of polar molecules is that they contain highly electronegative atoms. Consequently, many are capable of hydrogen bonding with aqueous or polar solvents. Because polar molecules are generally water soluble, they are referred to as being hydrophilic, or water-loving. The one-carbon alcohol, methanol, is an example of a polar molecule.

The final type of interaction occurs between neutral hydrophobic, or water-fearing, molecules. These nonpolar molecules do not interact with water and are characterized by atoms with the same or nearly the same electronegativities. In aqueous solutions, the hydrophobic molecules are driven together to the exclusion of water. For example, shaking a bottle of oil and vinegar (acetic acid in water), such as in a salad dressing, results in the oil being dispersed as tiny droplets in the vinegar. As the mixture settles, the oil collects in larger and larger drops until it only exists as a layer, or phase, above the vinegar.

A similar effect occurs in biological systems. As a protein folds to its final three-dimensional structure, the hydrophobic parts of the protein are forced together and away from the aqueous environment of the cell. Similarly, biological membranes are stabilized by the exclusion of water between layers of lipids as we will see later.

Energy Associated with the Bonds

Each of the bond types represents a measurable amount of energy. To break a bond, the equivalent amount of energy must be expended. In metabolism, bonds are broken in molecules, such as glucose, to "release" the energy. The cell utilizes this energy to drive other energy-consuming reactions. The covalent bond has the most energy associated with it, on average approximately 100 kilocalories/mole (kcal/mol). The noncovalent bonds, ionic and hydrogen, and hydrophobic interactions, have approximately five kcal/mol associated with each of them.

It should be noted here that throughout the presentation of this course approximations will be used for certain values so that estimations can be made as we move to more complex systems. It is to be acknowledged that very precise values for each of the measurements are not available.

Thus the noncovalent bonds that have been introduced have approximately 20 times less energy associated with them and, thus, are more easily broken individually. However, hydrogen bonds generally form extensive networks, and the total energy associated with the network is the sum of the individual interactions (van der Waals force). As anyone who has done a "belly flop" into a swimming pool knows, breaking a large surface area of water is extremely difficult (and painful). 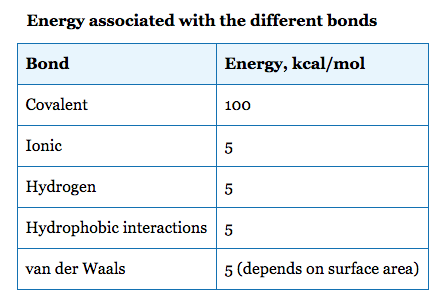 When NaCl dissolves in water, each ion becomes surrounded by at least 20 water molecules. As NaCl there is 5 kcal/mol of energy associated with the ionic attraction of the cation and anion, but when a Na ion is surrounded by 20 water molecules, there is 100 kcal/mol of energy associated with just the Na ion. Thus, NaCl in an aqueous solution is energetically more favored than NaCl as the ionically bonded molecule due to the resulting hydrated state. You will explore what happens to molecules that only partially dissociate in water, or weak electrolytes, in the next module.

An electrolyte is any fluid that contains free ions. You have already learned about ions and ionic properties. Important ions in physiology include sodium, potassium, calcium, chloride and phosphate. These ions are used in maintaining protein structure and in cell communication, and generally can help maintain water balances throughout the body. We get electrolytes through ingestion. Drinks with “electrolytes” have salts (sodium and potassium) that help maintain ion levels for athletes that lose ions through sweat. Electrolytes are essential for life, but many people get too much (like too much sodium from salt in processed food), which can also disrupt proper physiological function.

The log conversion reduces a tenfold change in hydrogen ion concentration to a one unit change in pH. The minus sign changes the negative numbers that would be obtained from log(H+) to positive ones. Since the pH scale is an inverse scale, the concentration of protons is high at low pH and low at high pH. A solution is said to be acidic if the pH is less than 7.0, and basic if the pH is more than 7.0. A solution is neutral if its pH is equal to 7.0.

The image below shows the pH of a number of common fluids. 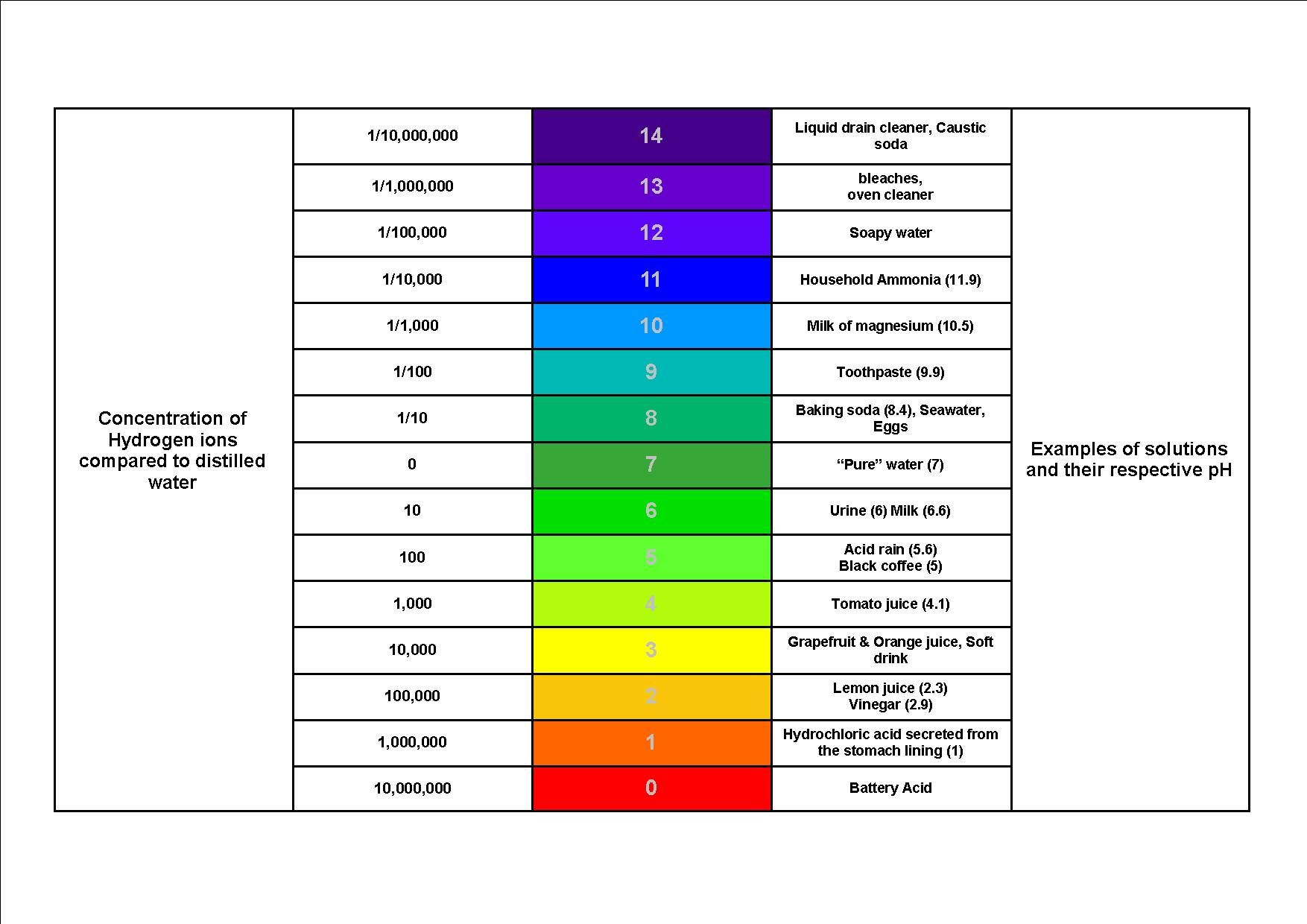 pH of various compounds
Examples of solutions with their pH listed, and concentration of Hydrogen ions compared to distilled water. For comparison, other biologically relevant solutions include the pH of pancreatic juice, which is 8.8, and seminal fluid, which has a pH of 7.8. By ChemEd DL (pH Scale)/CC-BY-SA.

in the general equation below) between the starting molecule and its dissociated parts. Thus dissociation can be seen as an acid (HA) in equilibrium with a proton (H+) and the corresponding conjugate base (A-).