Stellar Evolution and Our Sun

When you look at the sky on a clear night, you can see dozens, perhaps even hundreds, of tiny points of light. Almost every one of these points of light is a star, a giant ball of glowing gas at a very, very high temperature. Stars differ in size, temperature, and age, but they all appear to be made up of the same elements and to behave according to the same principles

People of many different cultures, including the Greeks, identified patterns of stars in the sky. We call these patterns constellations. Figure  below shows one of the most easily recognized constellations. 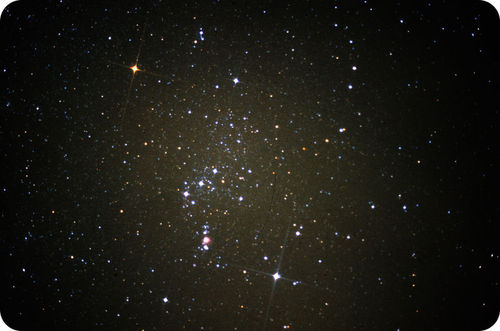 The ancient Greeks thought this group of stars looked like a hunter, so they named it Orion after their mythical hunter. The line of three stars at the center is "Orion's Belt".


Why do the patterns in constellations and in groups or clusters of stars, called asterisms, stay the same night after night? Although the stars move across the sky, they stay in the same patterns. This is because the apparent nightly motion of the stars is actually caused by the rotation of Earth on its axis. The patterns also shift in the sky with the seasons as Earth revolves around the Sun. As a result, people in a particular location can see different constellations in the winter than in the summer. For example, in the Northern Hemisphere Orion is a prominent constellation in the winter sky, but not in the summer sky. This is the annual traverse of the constellations.

How Stars Are Classified

The many different colors of stars reflect the star’s temperature. In Orion (as shown in the Figure above) the bright, red star in the upper left named Betelgeuse (pronounced BET-ul-juice) is not as hot than the blue star in the lower right named Rigel.

Think about how the color of a piece of metal changes with temperature. A coil of an electric stove will start out black but with added heat will start to glow a dull red. With more heat the coil turns a brighter red, then orange. At extremely high temperatures the coil will turn yellow-white, or even blue-white (it’s hard to imagine a stove coil getting that hot). A star’s color is also determined by the temperature of the star’s surface. Relatively cool stars are red, warmer stars are orange or yellow, and extremely hot stars are blue or blue-white (Figure  below). 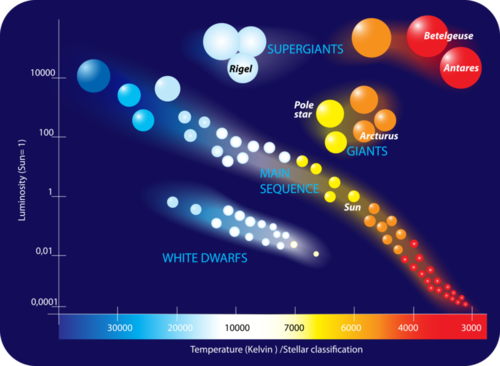 Color is the most common way to classify stars. Table  below shows the classification system. The class of a star is given by a letter. Each letter corresponds to a color, and also to a range of temperatures. Note that these letters don’t match the color names; they are left over from an older system that is no longer used.

Distances to stars that are relatively close to us can be measured using parallax. Parallax is an apparent shift in position that takes place when the position of the observer changes.

As Figure  below shows, astronomers use this same principle to measure the distance to stars. Instead of a finger, they focus on a star, and instead of switching back and forth between eyes, they switch between the biggest possible differences in observing position. To do this, an astronomer first looks at the star from one position and notes where the star is relative to more distant stars. Now where will the astronomer go to make an observation the greatest possible distance from the first observation? In six months, after Earth moves from one side of its orbit around the Sun to the other side, the astronomer looks at the star again. This time parallax causes the star to appear in a different position relative to more distant stars. From the size of this shift, astronomers can calculate the distance to the star.

For more about parallax, visit http://starchild.gsfc.nasa.gov/docs/StarChild/questions/parallax.html.


Parallax is used to measure the distance to stars that are relatively nearby.

Even with the most precise instruments available, parallax is too small to measure the distance to stars that are more than a few hundred light years away. For these more distant stars, astronomers must use more indirect methods of determining distance. Most of these methods involve determining how bright the star they are looking at really is. For example, if the star has properties similar to the Sun, then it should be about as bright as the Sun. The astronomer compares the observed brightness to the expected brightness.

1. What distinguishes a nebula and a star?

2. What kind of reactions provide a star with energy?

3. Stars are extremely massive. Why don't they collapse under the weight of their own gravity?

4. Of what importance are particle accelerators to scientists?

5. Which has a higher surface temperature: a blue star or a red star?

7. Why don’t astronomers use parallax to measure the distance to stars that are very far away?