But I want to say one thing to the American people. I want you to listen to me. I’m going to say this again: I did not have sexual relations with that woman, Miss Lewinsky. I never told anybody to lie, not a single time; never. These allegations are false. And I need to go back to work for the American people. Thank you. ~ President Bill Clinton, 1998

Some of the early leaders in philosophy—Aristotle, Socrates, and Plato—spoke extensively about morality and ethical principles. Aristotle is frequently cited as a central figure in the development of ethics as we discuss them today in the communication discipline. Aristotle claimed that a person who had ethos, or credibility, was not only able to convey good sense and good will, but also good morals. Great philosophers have debated the merits of living well, doing good, and even communicating skillfully. Smitter describes early Greeks and Romans as teachers of public speaking; these philosophers argued that public communication is “a means of civic engagement” and ethics are “a matter of virtue." Ethics and ethical communication are not only an important part of our lives and our decision-making but also are crucial to the public speaking process. In 2011, when Representative Anthony Weiner faced accusations of sending sexually explicit photographs to a woman, he vehemently denied any wrongdoing and claimed that he had been set up. Shortly after, his denial turned to an admission and apology. This scandal called into question the ethics of Rep. Weiner, yet it was also his lack of ethical communication that exacerbated the situation.

Morality is the process of discerning between right and wrong. Ethics involves making decisions about right and wrong within a dilemma. For example, you might claim that stealing is morally wrong. But is stealing morally wrong when a mother steals a loaf of bread to feed her four starving children? It’s this scenario that requires an understanding of ethics. In a moral dilemma, we apply ethics to make choices about what is good or bad, right or wrong. Sometimes, ethical dilemmas are simple. Other times, they require complex choices, such as the decision to report your immediate boss for misrepresenting expenses or the decision to move your grandmother into a retirement community. These scenarios are more complex than simple choices between right and wrong. Instead, these examples are ethical dilemmas because two “right” choices are pitted against one another. It’s good to report an unethical supervisor, but it’s also good to keep your job. It’s good that your grandmother feels independent, but it’s also positive for her to receive extra assistance as her health deteriorates.

As public speakers, we make ethical choices when preparing and delivering a speech. We can easily be faced with a moral dilemma over what information to provide or how to accurately represent that information. Knowing the speaking setting, the audience, and our knowledge of the topic, we are able to confront ethical dilemmas with a strong moral compass. This process is made easier by our ethical standards. Ethical standards, or moral principles, are the set of rules we abide by that make us “good” people and help us choose right from wrong. The virtuous standards to which we adhere influence our ethical understanding. For instance, followers of Buddha believe that communication should be careful—good communication should exhibit restraint, responsibility, and kindness.[4] 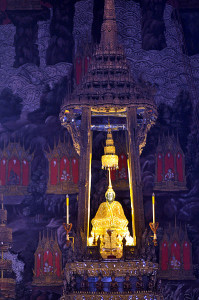 This stance informs one’s ethical standards. In fact, Merrill (2009) explains that the holy Dalai Lama, the Buddhist spiritual leader, believes compassion is even more essential than truth. Therefore, it is justifiable to be untruthful when the deception is part of the process of caring for another. This example illustrates how one’s belief system influences his or her ethical standards. These ethical standards are the guidelines we use to interpret rightness and wrongness in life, in relationships, and in public speaking. Wallace claims that “ethical standards of communication should place emphasis upon the means used to secure the end, rather than upon achieving the end itself.”[5] This argument suggests that speakers must consider moral standards through every step of the speech process.