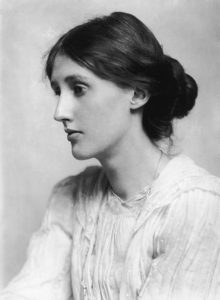 Virginia Woolf was born into late-Victorian London on January 25, 1882. Her mother was Julia Stephen (1846-1895), famous in the artistic and literary world for her beauty and in high demand for her skills as an informal nurse. Woolf’s father was Sir Leslie Stephen (1832-1904), a well-known literary critic and founder of the Dictionary of National Biography, who struggled with a sense of inadequacy in spite of his reputation. The family lived at 22 Hyde Park Gate in London and rented a summer house at St. Ives in Cornwall. The children grew up with governesses, and while the boys went on to school and university, the girls received much less formal education, a particularly sore point with Woolf, and a spur for her feminism. However, she read hugely from her father’s library, and developed a formidable and individual intellect. Her parents’ literary circle also helped to develop the foundations of her writing and thought.

Julia and Leslie had each been married previously. With his first wife, Minny Thackeray (1840-1875), Leslie had a daughter, Laura (1870-1884). He floundered at being widowed and left to bring up the young girl, who had increasing emotional and developmental problems. Julia, a friend of Minny’s, seemed a lifeline. She had had three children with Herbert Duckworth (1833-1870), whose sudden death gave her the sorrow that many friends saw as her main characteristic. George (1868-1934), Stella (1869-1897), and Gerald (1870-1937), along with Laura, were part of the new household when Julia and Leslie married in 1878.

Julia and Leslie had four more children together, of which Virginia was the third. Vanessa (1879-1961) was her childhood companion and fellow editor of the family newsletter, The Hyde Park Gate News; the two remained close friends and sometimes rivals in adulthood, when Vanessa married Clive Bell, who was a friend of her brother Thoby, had three children, and worked as an artist. Thoby (1880-1906) was a popular and good-looking young man whose Cambridge friends formed the initial Bloomsbury Group of writers and artists, with which all the Stephen siblings were connected to some degree. Adrian (1883-1948) was his mother’s favourite, but he clashed with his father and siblings, and became a psychoanalyst. The house at 22 Hyde Park Gate was full of children and energy, but also of sadness. Woolf wrote of being sexually molested by both her Duckworth half-brothers, which powerfully affected her. Laura was institutionalized in the 1890s as her disorders worsened. Julia Stephen suddenly died of influenza when Virginia was 13, “the worst disaster that could happen,” as she put it, which led to her first mental breakdown. In his own grief, Leslie leaned heavily on the girls, causing immense resentment. Stella Duckworth took on most of the responsibility, but she married in 1897, to Leslie’s distress. She died a few months after the wedding of peritonitis connected with pregnancy, another heavy blow to the family. Virginia’s mental health remained very fragile, but she carried on studying, reading, and writing, while helping Vanessa with their father’s demands.

When Leslie died of cancer in 1904, Virginia was saddened but liberated. With his death, she saw the Victorian past falling away. She suffered another nervous breakdown, which led to a suicide attempt, that year, but improved when she and her siblings left Hyde Park Gate and moved to unfashionable Bloomsbury to begin their own lives. Virginia enjoyed teaching adult courses at Morley College and working on her writing, as well as meeting with Thoby’s friends, but Thoby died at 26 of typhoid after a European trip, and again the family was crushed. Virginia worked on her first novel, The Voyage Out, which describes a young woman’s journey into South America and illness. In 1912, she agreed to marry Thoby’s friend Leonard Woolf (1880-1969), a Jewish writer who worked for the Colonial Civil Service, in spite of her uncertainty about their compatibility. Leonard provided support when Virginia made another suicide attempt in 1913, and had another breakdown in 1915, when The Voyage Out was finally published. With him, she established the Hogarth Press, named after their London house, in 1917, which published works by both Leonard and Virginia, as well as by other contemporary writers. The happiness of the marriage has been debated, and Virginia had a long affair with the Hogarth writer Vita Sackville-West (1892-1962) beginning in 1923, but regardless, Virginia saw Leonard as one of her most important readers and supports. In different ways, they were both interested in new artistic forms and genres, and the changing political landscape.

Over the next decades, Woolf produced many acclaimed modernist works, in spite of further troubles with mental health, often drawing on her own past and continually pushing the boundaries of form and perspective. Night and Day (1919) describes young people trying to find their own way in the new 20th century; Jacob’s Room (1922) memorializes Thoby and her family, as does The Waves (1931), with its fluid depiction of childhood’s effects, and also To the Lighthouse (1927), a resurrection of her parents and early life. Her essays collected in The Common Reader volumes (1925 and 1932) cover a broad variety of subjects, and Mrs. Dalloway (1925), set on a single day, depicts the way life attempts to carry on in spite of the shock of the World War I. An inventive biographer, Woolf wrote Orlando: A Biography (1928), a love letter to Vita Sackville-West, to equality, and to androgyny; Flush, A Biography (1933), a playful tour de force about the Brownings’ dog; and Roger Fry: A Biography (1940), which attempts truly to capture the life of her friend. A Room of One’s Own (1929), like the later Three Guineas (1938), is a seminal feminist text. The Years (1934) cost her a great effort, again returning to Victorian childhood’s effects on adulthood, and led to another depression. Fearing a German invasion of England, as well as another breakdown, she drowned herself in the River Ouse near her home in Sussex in 1941. She had completed her final novel, Between the Acts, the story of a historical pageant at a country house menaced by war. The end of the book has the central couple sitting alone in a kind of prehistoric dark, but finishes with the line, “They spoke.” Even in darkness and apparent meaninglessness, Woolf’s characters speak, and she is drawn to record them.