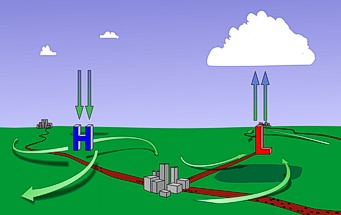 A few basic principles go a long way toward explaining how and why air moves: Warm air rising creates a low pressure zone at the ground. Air from the surrounding area is sucked into the space left by the rising air. Air flows horizontally at top of the troposphere; horizontal flow is called advection. The air cools until it descends. Where it reaches the ground, it creates a high pressure zone. Air flowing from areas of high pressure to low pressure creates winds. Warm air can hold more moisture than cold air. Air moving at the bases of the three major convection cells in each hemisphere north and south of the equator creates the global wind belts.

Convection in the atmosphere creates the planet’s weather. When warm air rises and cools in a low pressure zone, it may not be able to hold all the water it contains as vapor. Some water vapor may condense to form clouds or precipitation. When cool air descends, it warms. Since it can then hold more moisture, the descending air will evaporate water on the ground. Air moving between large high and low pressure systems creates the global wind belts that profoundly affect regional climate. Smaller pressure systems create localized winds that affect the weather and climate of a local area.

Local winds result from air moving between small low and high pressure systems. High and low pressure cells are created by a variety of conditions. Some local winds have very important effects on the weather and climate of some regions. 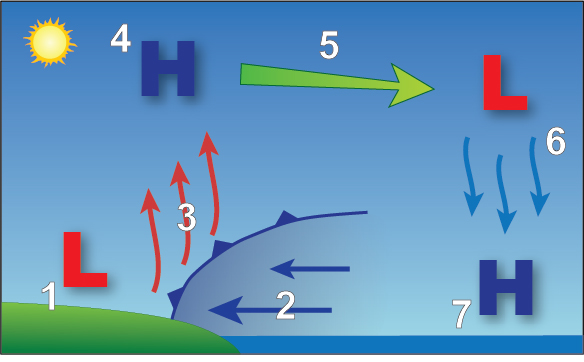 Formation of the sea breeze

Since water has a very high specific heat, it maintains its temperature well. So water heats and cools more slowly than land. If there is a large temperature difference between the surface of the sea (or a large lake) and the land next to it, high and low pressure regions form. This creates local winds.

Land and sea breezes create the pleasant climate for which Southern California is known. The effect of land and sea breezes are felt only about 50 to 100 km (30 to 60 miles) inland. This same cooling and warming effect occurs to a smaller degree during day and night, because land warms and cools faster than the ocean.

Monsoon winds are larger scale versions of land and sea breezes; they blow from the sea onto the land in summer and from the land onto the sea in winter. Monsoon winds are occur where very hot summer lands are next to the sea. Thunderstorms are common during monsoons.The most important monsoon in the world occurs each year over the Indian subcontinent. More than two billion residents of India and southeastern Asia depend on monsoon rains for their drinking and irrigation water. Back in the days of sailing ships, seasonal shifts in the monsoon winds carried goods back and forth between India and Africa. 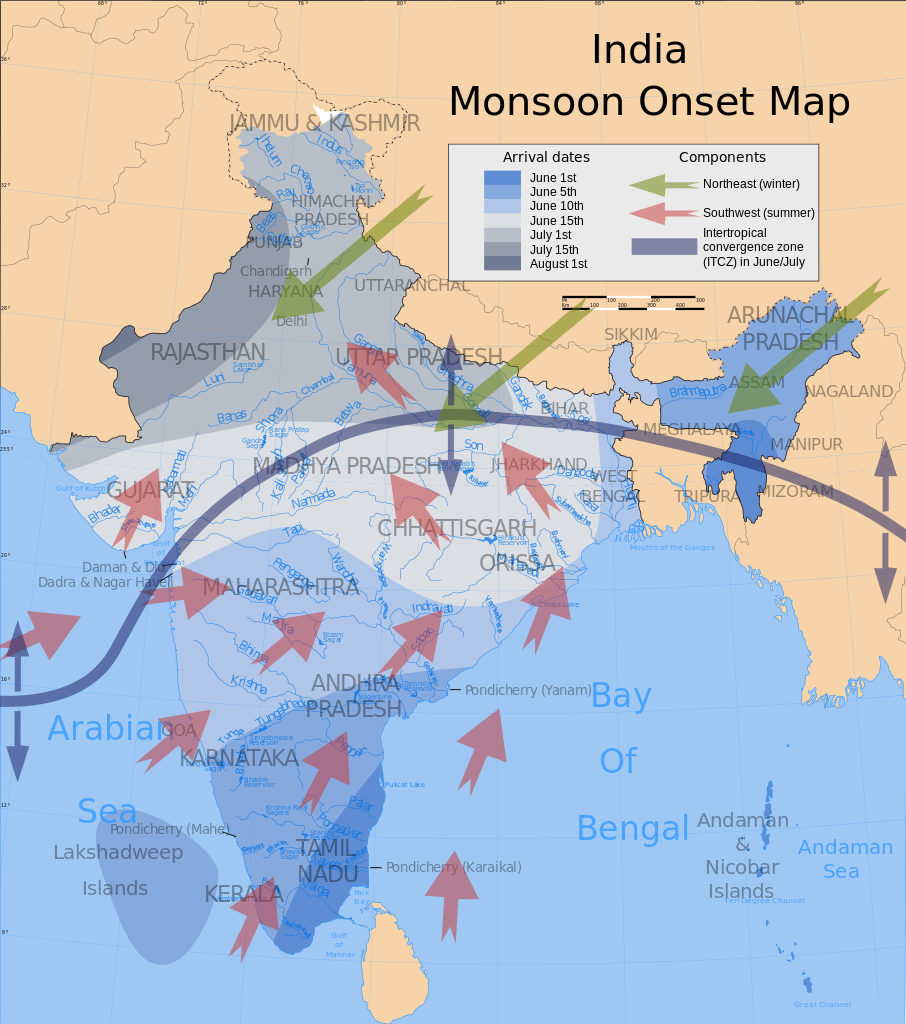 Temperature differences between mountains and valleys create mountain and valley breezes. During the day, air on mountain slopes is heated more than air at the same elevation over an adjacent valley. As the day progresses, warm air rises and draws the cool air up from the valley, creating a valley breeze. At night the mountain slopes cool more quickly than the nearby valley, which causes a mountain breeze to flow downhill. 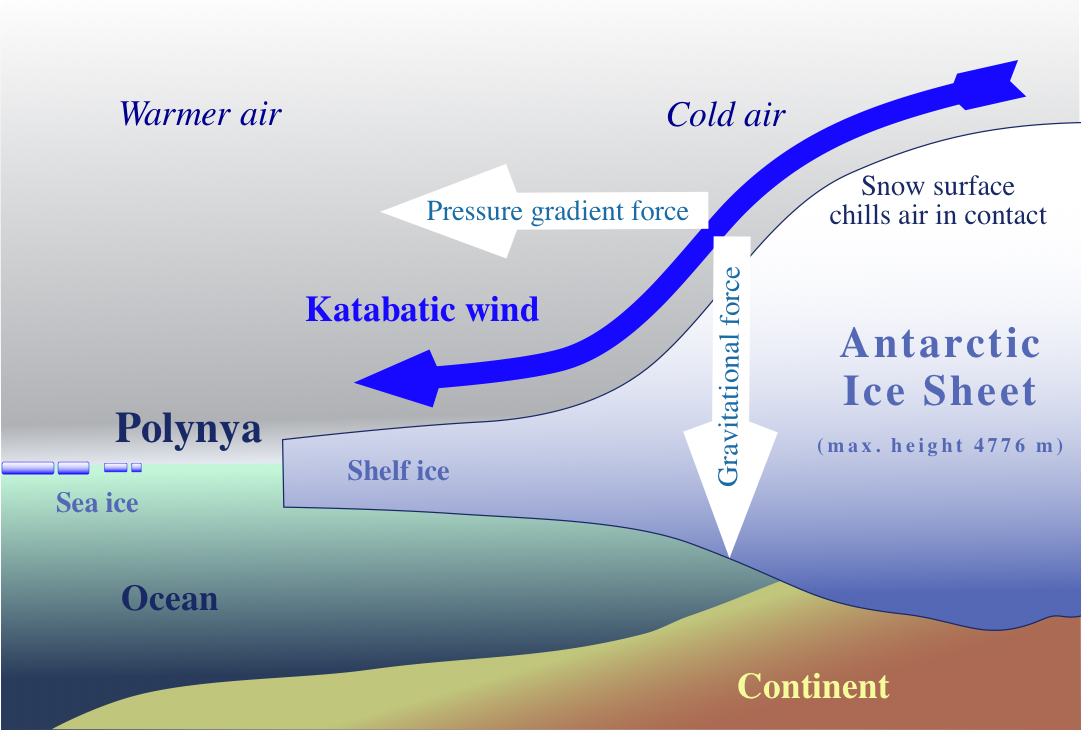 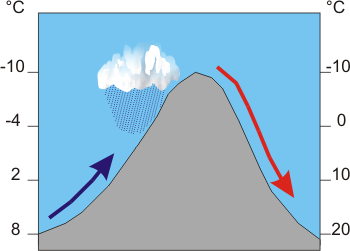 Santa Ana winds are created in the late fall and winter when the Great Basin east of the Sierra Nevada cools, creating a high pressure zone. The high pressure forces winds downhill and in a clockwise direction (because of Coriolis). The air pressure rises, so temperature rises and humidity falls. The winds blow across the Southwestern deserts and then race downhill and westward toward the ocean. Air is forced through canyons cutting the San Gabriel and San Bernardino mountains.

The Santa Ana winds often arrive at the end of California’s long summer drought season. The hot, dry winds dry out the landscape even more. If a fire starts, it can spread quickly, causing large-scale devastation. 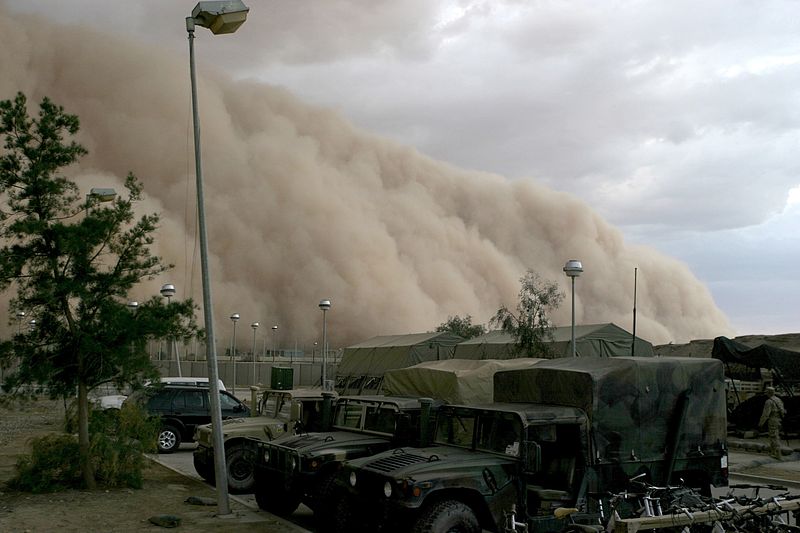 High summer temperatures on the desert create high winds, which are often associated with monsoon storms. Desert winds pick up dust because there is not as much vegetation to hold down the dirt and sand. A haboob forms in the downdrafts on the front of a thunderstorm. The image on the left if of a nabob. Dust devils, also called whirlwinds, form as the ground becomes so hot that the air above it heats and rises. Air flows into the low pressure and begins to spin. Dust devils are small and short-lived but they may cause damage.

On July 5, 2011 Phoenix Arizona experienced a large-scale haboob that was captured by many people using their smartphones and cameras. Watch this video of that event.

GRADE 3 PE- MOVEMENTS IN RELATION TO TIME, FORCE AND FLOW.docx