Where an earthquake will occur is the easiest feature to predict. Scientists know that earthquakes take place at plate boundaries and tend to happen where they’ve occurred before. Earthquake-prone communities should always be prepared for an earthquake. These communities can implement building codes to make structures earthquake safe.

The geology of California underlies the state’s wealth of natural resources as well as its natural hazards. This video explores the enormous diversity of California’s geology: 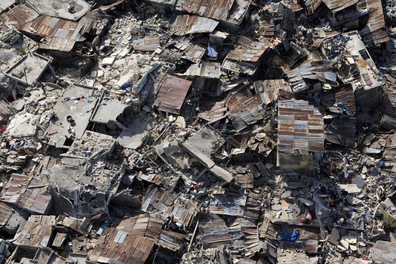 Earthquakes are natural disasters that cause enormous amounts of damage, second only to hurricanes. Earthquake-safe construction techniques, securing heavy objects, and preparing an emergency kit are among the precautions people can take to minimize damage.Earthquakes kill people and cause property damage. However, the ground shaking almost never kills people, and the ground does not swallow someone up. The damage depends somewhat on the earthquake size but mostly on the quality of structures. Structures falling on people injure and kill them. More damage is done and more people are killed by the fires that follow an earthquake than the earthquake itself.

There are a variety of ways earthquakes become deadly. Probably the greatest influence is population density. The magnitude 9.2 Great Alaska Earthquake, near Anchorage, of 1964 resulted in only 131 deaths. At the time few people lived in the area. Oddly enough, size doesn’t matter. Only about 2,000 people died in the 1960 Great Chilean earthquake, the largest earthquake ever recorded. The Indian Ocean earthquake of 2004 was one of the largest ever, but most of the 230,000 fatalities were caused by the tsunami, not the earthquake itself.Ground type is an important factor in earthquake damage. Solid bedrock vibrates less than soft sediments so there is less damage on bedrock. Sediments that are saturated with water under go liquefaction and become like quicksand. This will have dangerous implications for Salt Lake City and the Wasatch Front in Utah. Much of the Wasatch Front is loose soil, left over from the remnants of Lake Bonneville. Along the middle of the two mountain ranges, between the Wasatch Mountains and the Oquirrh Mountains, is the Jordan River which flows from Utah Lake northward to the Great Salt Lake. Near the river and surrounding floodplain, the water table is near the surface. When the ground shakes, the water near the surface shifts upward and over-saturates the soil making it extremely unstable. Earthquake effects on buildings are seen in this animation.

Skyscrapers and other large structures built on soft ground must be anchored to bedrock, even if it lies hundreds of meters below the ground surface. Larger buildings must sway, but not so much that they touch nearby buildings. Counterweights and diagonal steel beams are used to hold down sway. Large buildings can also be placed on rollers so that they move with the ground. Earthquake prone areas should have building codes that require the use of correct building materials. Houses should also be built with wood and steel rather than brick and stone because they need to be able to bend and sway. New buildings should be built on layers of steel and rubber to absorb the shock of the waves. Connections, such as where the walls meet the foundation, must be made strong to withstand the shaking. In a multi-story building, the first story must be well supported.

To make older buildings more earthquake safe, retrofitting with steel or wood can reinforce a building's structure and its connections. Elevated freeways and bridges can also be retrofitted so that they do not collapse.Fires often cause more damage than the earthquake. Fires start because seismic waves rupture gas and electrical lines, and breaks in water mains make it difficult to fight the fires. Builders zigzag pipes so that they bend and flex when the ground shakes. In San Francisco, water and gas pipelines are separated by valves so that areas can be isolated if one segment breaks.

Can humans create earthquakes? Maybe not intentionally, but the answer is yes—and here's why. If a water reservoir is built on top of an active fault line, the water may actually lubricate the fault and weaken the stress built up within it. This may either create a series of small earthquakes or potentially create a large earthquake. Also the shear weight of the reservoir's water can weaken the bedrock causing it to fracture. Then the obvious concern is if the dam fails. Earthquakes can also be generated if humans inject other fluids into a fault such as sewage or chemical waste. Finally, nuclear explosions can trigger earthquakes. In fact, one way to determine if a nation has tested a nuclear bomb is by monitoring the earthquakes and energy released by the explosion.

Earthquake Prediction in US

BUSINESS BADM 645-4 •  University of the Cumberlands

BUSINESS 110 •  University of the Cumberlands