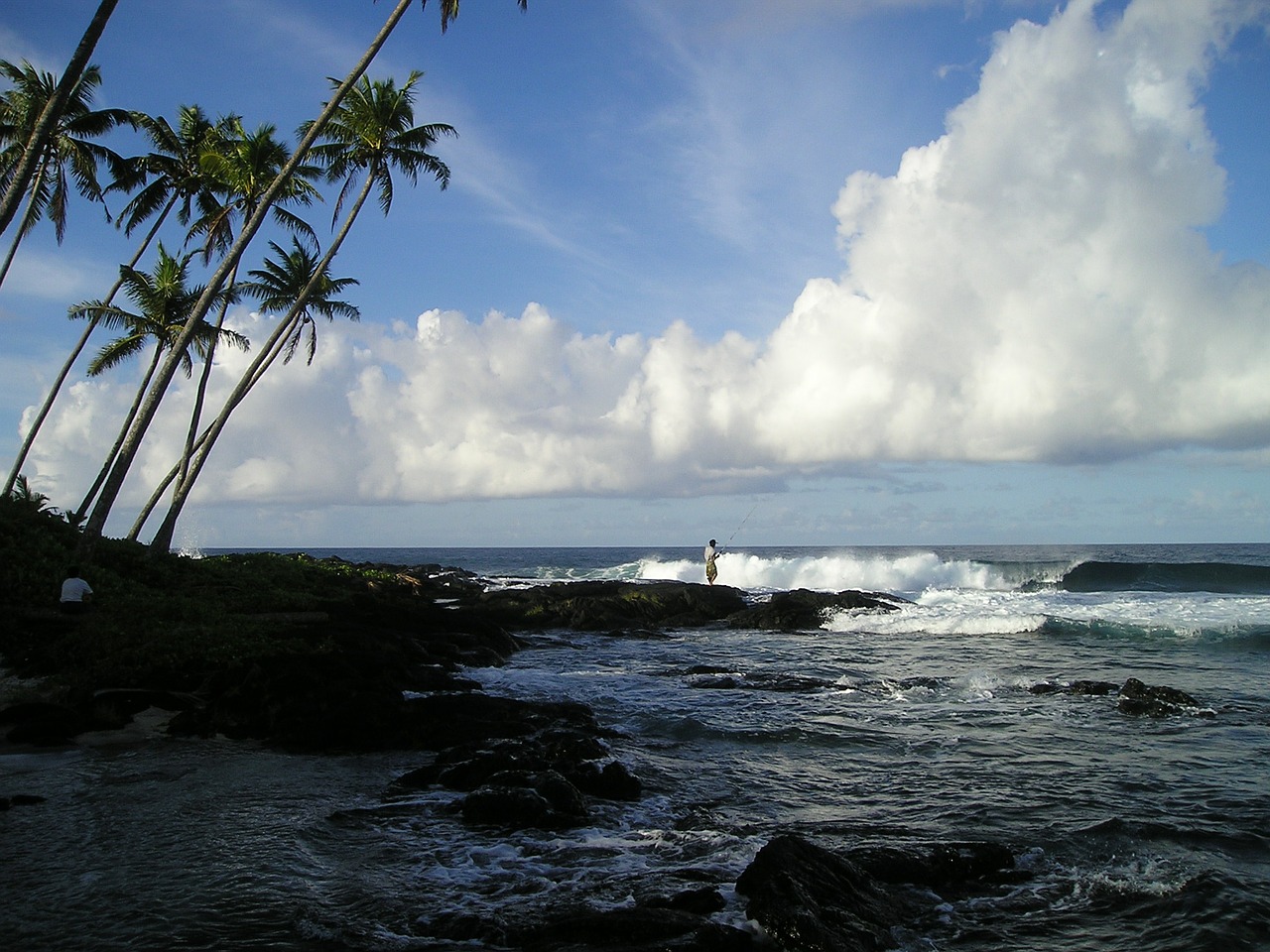 Ocean water is constantly in motion: north-south, east-west, alongshore, and vertically. Seawater motions are the result of waves, tides, and currents. Ocean movements are the consequence of many separate factors: wind, tides, Coriolis effect, water density differences, and the shape of the ocean basins. Waves have been discussed in previous chapters in several contexts: seismic waves traveling through the planet, sound waves traveling through seawater, and ocean waves eroding beaches. Waves transfer energy and the size of a wave and the distance it travels depends on the amount of energy that it carries.

Ocean waves originate from steady winds or high storm winds over the water. Sometimes these winds are far from where the ocean waves are seen. The largest wind waves form when the wind is very strong, blows steadily for a long time, and blows over a long distance.The wind could be strong, but if it gusts for just a short time, large waves won’t form. Wind blowing across the water transfers energy to that water. The energy first creates tiny ripples that create an uneven surface for the wind to catch so that it may create larger waves. These waves travel across the ocean out of the area where the wind is blowing.

Remember that a wave is a transfer of energy. Water molecules in waves make circles or ellipses. Energy transfers between molecules but the molecules themselves mostly bob up and down in place. The Internet has a variety of animations to help explain the concept of wave action. In this animation, a water bottle bobs in place like a water molecule. An animation of motion in wind waves from the Scripps Institution of Oceanography. Here is an animation of a deep water wave is seen here. Notice the circular motion of water as wave energy transfers through it. Compare that to the wave action in shallow waters using this animation.

Waves break when they become too tall to be supported by their base. This can happen at sea but happens predictably as a wave moves up a shore. The energy at the bottom of the wave is lost by friction with the ground so that the bottom of the wave slows down but the top of the wave continues at the same speed. The crest falls over and crashes down.Some of the damage done by storms is from storm surges. Water piles up at a shoreline as storm winds push waves into the coast. Storm surge may raise sea level as much as 7.5 m (25 ft), which can be devastating in a shallow land area when winds, waves, and rain are intense.

Tsunami are described in the Tectonic Forces chapter as damaging waves that result from the sharp jolt to the water from a powerful geologic event such as undersea earthquakes or volcanic eruptions. Landslides, meteorite impacts, or any other jolt to ocean water may form a tsunami. Tsunami can travel at speeds of 800 kilometers per hour (500 miles per hour). Tsunami have small wave heights and long wavelengths so they are usually unnoticed at sea. As the wave rides up the continental shelf the wave height increases.

The wave speed of a tsunami is also slowed by friction with the shallower ocean floor, which causes the wavelength to decrease, creating a much taller wave called a run-up. Many people caught in a tsunami have no warning of its approach. Since the wavelength is long, a long time can pass between crests or troughs onshore. In 1755 in Lisbon, an offshore earthquake caused a great deal of damage on land. People rushed to the open space of the shore and discovered that the water was flowing seaward fast. The trough of the tsunami wave reached shore first. People who went out onto the open beach were drowned when the crest of the wave reached shore.

ED 35 •  University of the Philippines Diliman