All of the organ systems of your body are interdependent, and the skeletal system is no exception. The food you take in via your digestive system and the hormones secreted by your endocrine system affect your bones. Even using your muscles to engage in exercise has an impact on your bones.

During long space missions, astronauts can lose approximately 1 to 2 percent of their bone mass per month. This loss of bone mass is thought to be caused by the lack of mechanical stress on astronauts’ bones due to the low gravitational forces in space. Lack of mechanical stress causes bones to lose mineral salts and collagen fibers, and thus strength. Similarly, mechanical stress stimulates the deposition of mineral salts and collagen fibers. The internal and external structure of a bone will change as stress increases or decreases so that the bone is an ideal size and weight for the amount of activity it endures. That is why people who exercise regularly have thicker bones than people who are more sedentary. It is also why a broken bone in a cast atrophies while its contralateral mate maintains its concentration of mineral salts and collagen fibers. The bones undergo remodeling as a result of forces (or lack of forces) placed on them.

Numerous, controlled studies have demonstrated that people who exercise regularly have greater bone density than those who are more sedentary. Any type of exercise will stimulate the deposition of more bone tissue, but resistance training has a greater effect than cardiovascular activities. Resistance training is especially important to slow down the eventual bone loss due to aging and for preventing osteoporosis.

The vitamins and minerals contained in all of the food we consume are important for all of our organ systems. However, there are certain nutrients that affect bone health. 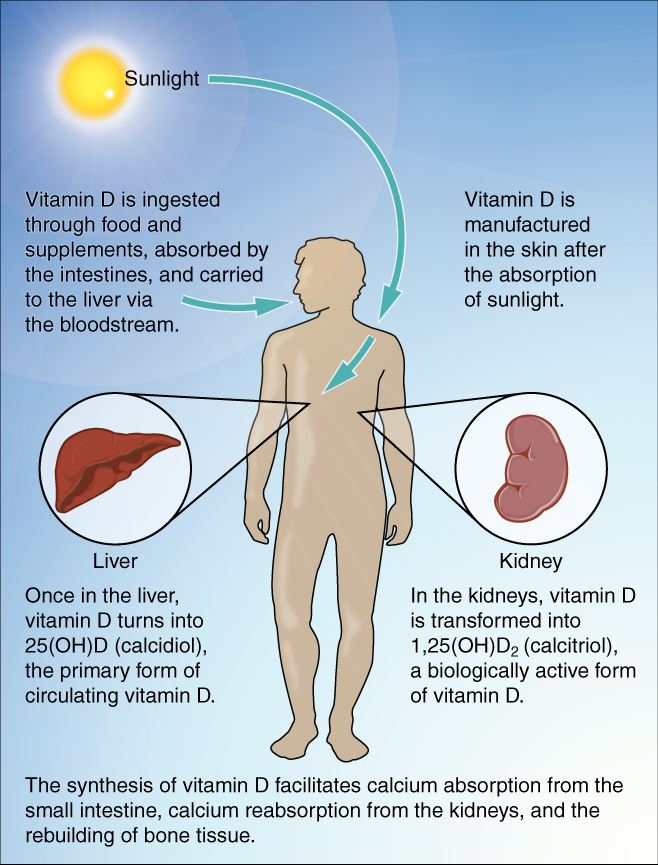 Figure 1. Synthesis of Vitamin D. Sunlight is one source of vitamin D.

You already know that calcium is a critical component of bone, especially in the form of calcium phosphate and calcium carbonate. Since the body cannot make calcium, it must be obtained from the diet. However, calcium cannot be absorbed from the small intestine without vitamin D. Therefore, intake of vitamin D is also critical to bone health. In addition to vitamin D’s role in calcium absorption, it also plays a role, though not as clearly understood, in bone remodeling.

Milk and other dairy foods are not the only sources of calcium. This important nutrient is also found in green leafy vegetables, broccoli, and intact salmon and canned sardines with their soft bones. Nuts, beans, seeds, and shellfish provide calcium in smaller quantities.

Except for fatty fish like salmon and tuna, or fortified milk or cereal, vitamin D is not found naturally in many foods. The action of sunlight on the skin triggers the body to produce its own vitamin D (Figure 1), but many people, especially those of darker complexion and those living in northern latitudes where the sun’s rays are not as strong, are deficient in vitamin D. In cases of deficiency, a doctor can prescribe a vitamin D supplement.

Vitamin K also supports bone mineralization and may have a synergistic role with vitamin D in the regulation of bone growth. Green leafy vegetables are a good source of vitamin K.

The minerals magnesium and fluoride may also play a role in supporting bone health. While magnesium is only found in trace amounts in the human body, more than 60 percent of it is in the skeleton, suggesting it plays a role in the structure of bone. Fluoride can displace the hydroxyl group in bone’s hydroxyapatite crystals and form fluorapatite. Similar to its effect on dental enamel, fluorapatite helps stabilize and strengthen bone mineral. Fluoride can also enter spaces within hydroxyapatite crystals, thus increasing their density.

Omega-3 fatty acids have long been known to reduce inflammation in various parts of the body. Inflammation can interfere with the function of osteoblasts, so consuming omega-3 fatty acids, in the diet or in supplements, may also help enhance production of new osseous tissue. Table 1 summarizes the role of nutrients in bone health.

The endocrine system produces and secretes hormones, many of which interact with the skeletal system. These hormones are involved in controlling bone growth, maintaining bone once it is formed, and remodeling it.

Hormones That Influence Osteoblasts and/or Maintain the Matrix

GH is not alone in stimulating bone growth and maintaining osseous tissue. Thyroxine, a hormone secreted by the thyroid gland promotes osteoblastic activity and the synthesis of bone matrix. During puberty, the sex hormones (estrogen in girls, testosterone in boys) also come into play. They too promote osteoblastic activity and production of bone matrix, and in addition, are responsible for the growth spurt that often occurs during adolescence. They also promote the conversion of the epiphyseal plate to the epiphyseal line (i.e., cartilage to its bony remnant), thus bringing an end to the longitudinal growth of bones. Additionally, calcitriol, the active form of vitamin D, is produced by the kidneys and stimulates the absorption of calcium and phosphate from the digestive tract.

Aging and the Skeletal System

While osteoporosis can involve any bone, it most commonly affects the proximal ends of the femur, vertebrae, and wrist. As a result of the loss of bone density, the osseous tissue may not provide adequate support for everyday functions, and something as simple as a sneeze can cause a vertebral fracture. When an elderly person falls and breaks a hip (really, the femur), it is very likely the femur that broke first, which resulted in the fall. Histologically, osteoporosis is characterized by a reduction in the thickness of compact bone and the number and size of trabeculae in cancellous bone. 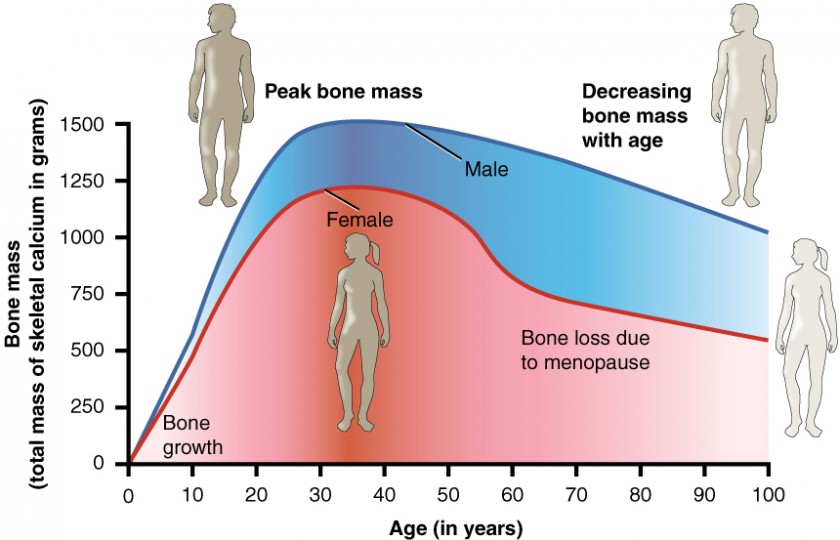 Figure 2 shows that women lose bone mass more quickly than men starting at about 50 years of age. This occurs because 50 is the approximate age at which women go through menopause. Not only do their menstrual periods lessen and eventually cease, but their ovaries reduce in size and then cease the production of estrogen, a hormone that promotes osteoblastic activity and production of bone matrix. Thus, osteoporosis is more common in women than in men, but men can develop it, too. Anyone with a family history of osteoporosis has a greater risk of developing the disease, so the best treatment is prevention, which should start with a childhood diet that includes adequate intake of calcium and vitamin D and a lifestyle that includes weight-bearing exercise. These actions, as discussed above, are important in building bone mass. Promoting proper nutrition and weight-bearing exercise early in life can maximize bone mass before the age of 30, thus reducing the risk of osteoporosis.

For many elderly people, a hip fracture can be life threatening. The fracture itself may not be serious, but the immobility that comes during the healing process can lead to the formation of blood clots that can lodge in the capillaries of the lungs, resulting in respiratory failure; pneumonia due to the lack of poor air exchange that accompanies immobility; pressure sores (bed sores) that allow pathogens to enter the body and cause infections; and urinary tract infections from catheterization.

Current treatments for managing osteoporosis include bisphosphonates (the same medications often used in Paget’s disease), calcitonin, and estrogen (for women only). Minimizing the risk of falls, for example, by removing tripping hazards, is also an important step in managing the potential outcomes from the disease.

Bone modeling and remodeling require osteoclasts to resorb unneeded, damaged, or old bone, and osteoblasts to lay down new bone. Two hormones that affect the osteoclasts are parathyroid hormone (PTH) and calcitonin.

PTH stimulates osteoclast proliferation and activity. As a result, calcium is released from the bones into the circulation, thus increasing the calcium ion concentration in the blood. PTH also promotes the reabsorption of calcium by the kidney tubules, which can affect calcium homeostasis (see below).

The small intestine is also affected by PTH, albeit indirectly. Because another function of PTH is to stimulate the synthesis of vitamin D, and because vitamin D promotes intestinal absorption of calcium, PTH indirectly increases calcium uptake by the small intestine. Calcitonin, a hormone secreted by the thyroid gland, has some effects that counteract those of PTH. Calcitonin inhibits osteoclast activity and stimulates calcium uptake by the bones, thus reducing the concentration of calcium ions in the blood. As evidenced by their opposing functions in maintaining calcium homeostasis, PTH and calcitonin are generally not secreted at the same time. Table 2 summarizes the hormones that influence the skeletal system.

Introduction to Cells and Tissues | Anatomy and Physiology I.pdf

BIO_290 ANATOMY AND PHYSIOLOGY I _ University of Phoenix.pdf