The appendicular skeleton includes all of the limb bones, plus the bones that unite each limb with the axial skeleton (Figure 1). 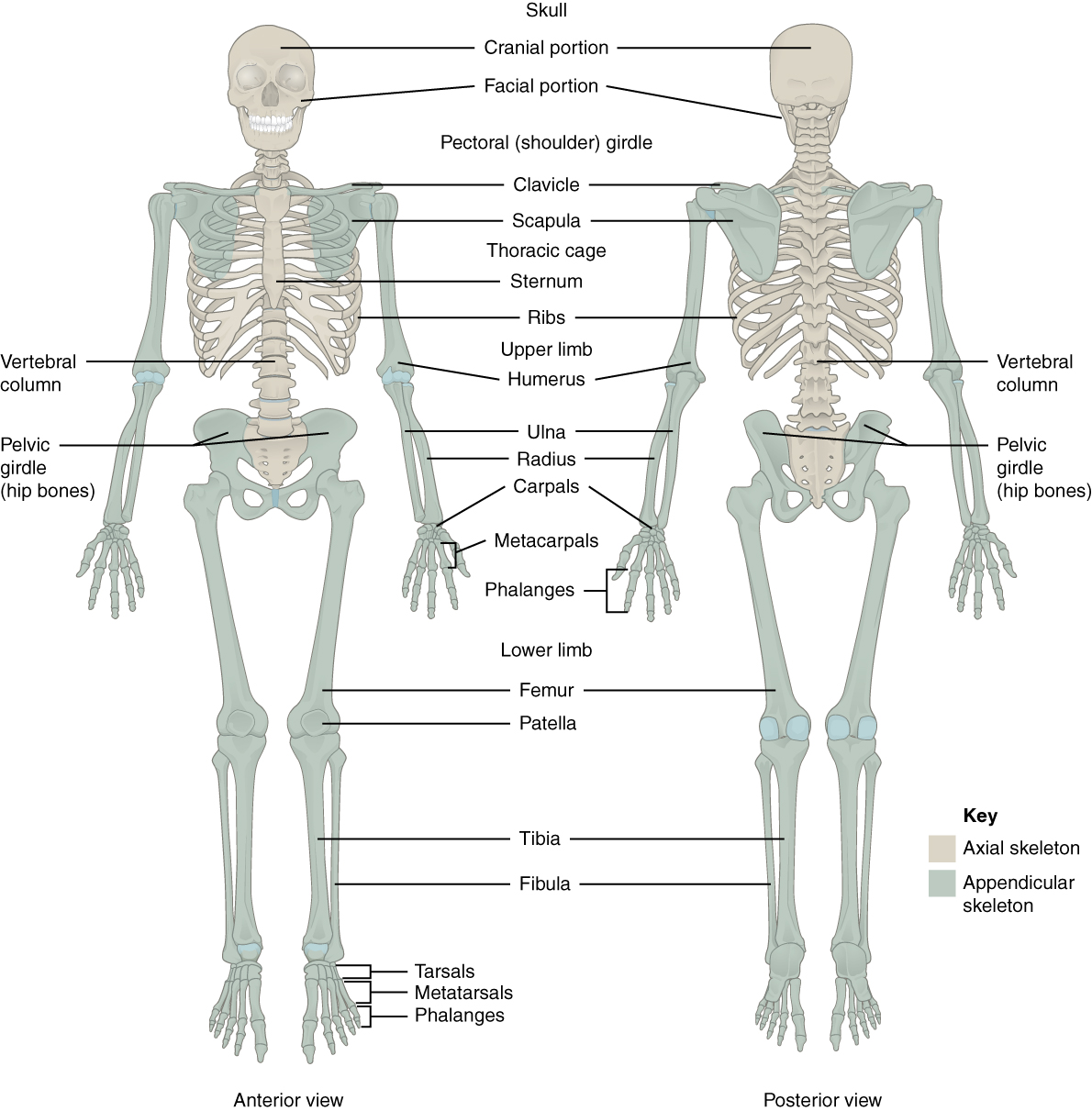 Figure 1. Axial and Appendicular Skeletons. Click for larger image. The axial skeleton forms the central axis of the body and consists of the skull, vertebral column, and thoracic cage. The appendicular skeleton consists of the pectoral and pelvic girdles, the limb bones, and the bones of the hands and feet.

The bones that attach each upper limb to the axial skeleton form the pectoral girdle (shoulder girdle). This consists of two bones, the scapula and clavicle (Figure 2). The clavicle (collarbone) is an S-shaped bone located on the anterior side of the shoulder. It is attached on its medial end to the sternum of the thoracic cage, which is part of the axial skeleton. The lateral end of the clavicle articulates (joins) with the scapula just above the shoulder joint. You can easily palpate, or feel with your fingers, the entire length of your clavicle.

Figure 2. Pectoral Girdle. The pectoral girdle consists of the clavicle and the scapula, which serve to attach the upper limb to the sternum of the axial skeleton.

The right and left pectoral girdles are not joined to each other, allowing each to operate independently. In addition, the clavicle of each pectoral girdle is anchored to the axial skeleton by a single, highly mobile joint. This allows for the extensive mobility of the entire pectoral girdle, which in turn enhances movements of the shoulder and upper limb.

The clavicle is the only long bone that lies in a horizontal position in the body (see Figure 2). The clavicle has several important functions. First, anchored by muscles from above, it serves as a strut that extends laterally to support the scapula. This in turn holds the shoulder joint superiorly and laterally from the body trunk, allowing for maximal freedom of motion for the upper limb. The clavicle also transmits forces acting on the upper limb to the sternum and axial skeleton. Finally, it serves to protect the underlying nerves and blood vessels as they pass between the trunk of the body and the upper limb.

The clavicle has three regions: the medial end, the lateral end, and the shaft. The medial end, known as the sternal end of the clavicle, has a triangular shape and articulates with the manubrium portion of the sternum. This forms the sternoclavicular joint, which is the only bony articulation between the pectoral girdle of the upper limb and the axial skeleton. This joint allows considerable mobility, enabling the clavicle and scapula to move in upward/downward and anterior/posterior directions during shoulder movements. The sternoclavicular joint is indirectly supported by the costoclavicular ligament (costo- = “rib”), which spans the sternal end of the clavicle and the underlying first rib. The lateral or acromial end of the clavicle articulates with the acromion of the scapula, the portion of the scapula that forms the bony tip of the shoulder. There are some sex differences in the morphology of the clavicle. In women, the clavicle tends to be shorter, thinner, and less curved. In men, the clavicle is heavier and longer, and has a greater curvature and rougher surfaces where muscles attach, features that are more pronounced in manual workers.

The clavicle is the most commonly fractured bone in the body. Such breaks often occur because of the force exerted on the clavicle when a person falls onto his or her outstretched arms, or when the lateral shoulder receives a strong blow. Because the sternoclavicular joint is strong and rarely dislocated, excessive force results in the breaking of the clavicle, usually between the middle and lateral portions of the bone. If the fracture is complete, the shoulder and lateral clavicle fragment will drop due to the weight of the upper limb, causing the person to support the sagging limb with their other hand. Muscles acting across the shoulder will also pull the shoulder and lateral clavicle anteriorly and medially, causing the clavicle fragments to override. The clavicle overlies many important blood vessels and nerves for the upper limb, but fortunately, due to the anterior displacement of a broken clavicle, these structures are rarely affected when the clavicle is fractured.

The scapula is also part of the pectoral girdle and thus plays an important role in anchoring the upper limb to the body. The scapula is located on the posterior side of the shoulder. It is surrounded by muscles on both its anterior (deep) and posterior (superficial) sides, and thus does not articulate with the ribs of the thoracic cage. 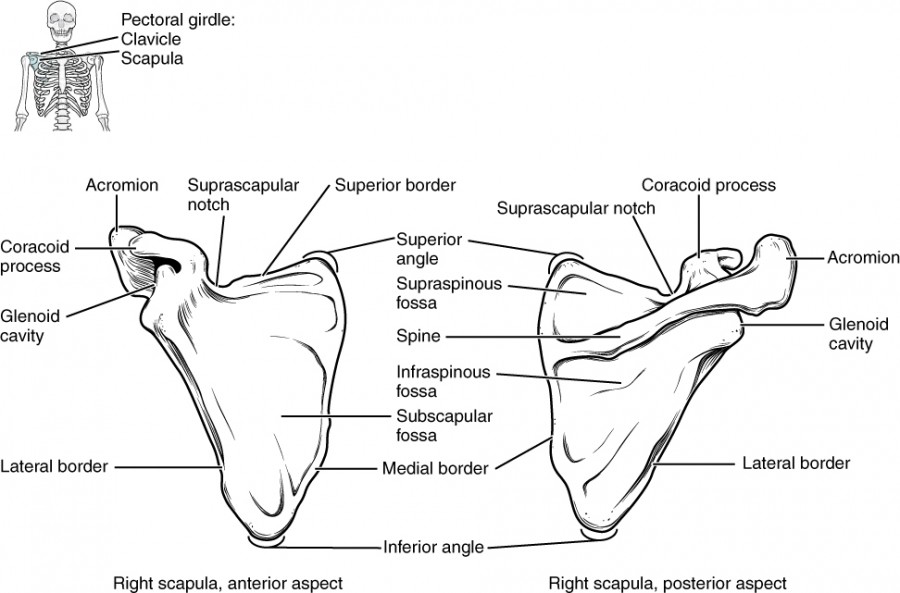 Figure 3. Scapula. The isolated scapula is shown here from its anterior (deep) side and its posterior (superficial) side.

The scapula also has two prominent projections. Toward the lateral end of the superior border, between the suprascapular notch and glenoid cavity, is the hook-like coracoid process (coracoid = “shaped like a crow’s beak”). This process projects anteriorly and curves laterally. At the shoulder, the coracoid process is located inferior to the lateral end of the clavicle. It is anchored to the clavicle by a strong ligament, and serves as the attachment site for muscles of the anterior chest and arm. On the posterior aspect, the spine of the scapula is a long and prominent ridge that runs across its upper portion. Extending laterally from the spine is a flattened and expanded region called the acromion or acromial process. The acromion forms the bony tip of the superior shoulder region and articulates with the lateral end of the clavicle, forming the acromioclavicular joint (see Figure 2). Together, the clavicle, acromion, and spine of the scapula form a V-shaped bony line that provides for the attachment of neck and back muscles that act on the shoulder, as well as muscles that pass across the shoulder joint to act on the arm.

The scapula has three depressions, each of which is called a fossa (plural = fossae). Two of these are found on the posterior scapula, above and below the scapular spine. Superior to the spine is the narrow supraspinous fossa, and inferior to the spine is the broad infraspinous fossa. The anterior (deep) surface of the scapula forms the broad subscapular fossa. All of these fossae provide large surface areas for the attachment of muscles that cross the shoulder joint to act on the humerus.

PSIO201 3.1 Muscles that Move the Arm, Forearm, Hand, and Digits.pdf

Appendicular Muscles of the Pectoral Girdle and Upper Limbs.docx