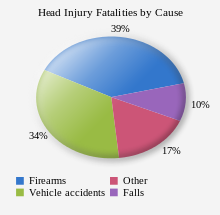 TBIs occur when an individual experiences a significant trauma or injury to the head. Neurocognitive disorder due to TBI is diagnosed when persistent cognitive impairment is observed immediately following the head injury, along with one or more of the following symptoms: loss of consciousness, posttraumatic amnesia, disorientation and confusion, or neurological impairment (APA, 2013).

The presentation of symptoms varies among individuals and depends largely on the location of the injury and the intensity of the trauma. Furthermore, the effects of the TBI can be temporary or permeant. Symptoms generally range from headaches, disorientation, confusion, irritability, fatigue, poor concentration, as well as emotional and behavioral changes. More severe injuries can result in more significant neurological symptoms such as seizures, paralysis and visual disturbances (APA, 2013).

The most common type of TBI is a concussion. A concussion occurs when there is a significant blow to the head, followed by changes in brain functioning. It often causes immediate disorientation or loss of consciousness, along with headaches, dizziness, nausea, and sensitivity to light (Alla, Sullivan, & McCrory, 2012). While symptoms of a concussion are usually temporary, there can be more permanent damage due to repeated concussions, particularly if they are within close time periods. The media has brought considerable attention to this with the recent discussions of chronic traumatic encephalopathy (CTE) which is a progressive, degenerative condition due to repeated head trauma. Chronic Traumatic Encephalopathy (CTE) is a distinctive tau-protein associated neurodegenerative disease. There has been a rise of CTE diagnosis in athletes, especially American football players, as well as in military veterans in combat settings. Although CTE has been publicly recognized relatively recently, it was first described as “punch drunk” syndrome in a classic article by Martland et al.  The report was focused on a number of boxers who had suffered repetitive head blows throughout their careers, and were presenting with both psychiatric symptoms as well as severe memory and neurocognitive deficits, analogous to typical dementia patients. In addition to the neurological symptoms, psychological symptoms such as depression and poor impulse control have been observed in individuals with CTE. These individuals also appear to be at greater risk for development of dementia (McKee et al., 2013).

Prevention is another key strategy that needs to be implemented in various sports and military settings. Providing education for safe practice techniques, such as safe tackling and hitting, and providing ready access to full neuropsychiatric assessment by team physician could have measurable benefits. The combination of advanced of research techniques including neuroimaging, as well as increasing public awareness of CTE, offers promising vistas for research advancement.

A progressive, degenerative condition due to repeated head trauma.

Occurs when there is a significant blow to the head, followed by changes in brain functioning.