Literature, in its broadest sense, is any written work. Etymologically, the term derives from Latin litaritura/litteratura "writing formed with letters," although some definitions include spoken or sung texts. More restrictively, it is writing that possesses literary merit. Literature can be classified according to whether it is fiction or non-fiction and whether it is poetry or prose. It can be further distinguished according to major forms such as the novel, short story or drama, and works are often categorized according to historical periods or their adherence to certain aesthetic features or expectations (genre).

Taken to mean only written works, literature was first produced by some of the world's earliest civilizations—those of Ancient Egypt and Sumeria—as early as the 4th millennium BC; taken to include spoken or sung texts, it originated even earlier, and some of the first written works may have been based on a pre-existing oral tradition. As urban cultures and societies developed, there was a proliferation in the forms of literature. Developments in print technology allowed for literature to be distributed and experienced on an unprecedented scale, which has culminated in the twenty-first century in electronic literature.

Definitions of literature have varied over time.  In Western Europe prior to the eighteenth century, literature as a term indicated all books and writing.[14]  A more restricted sense of the term emerged during the Romantic period, in which it began to demarcate "imaginative" literature.[15] 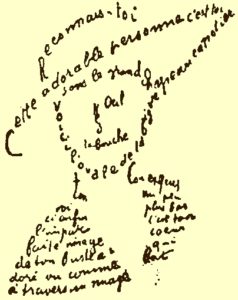 A calligram by Guillaume Apollinaire. These are a type of poem in which the written words are arranged in such a way to produce a visual image.

Poetry is a form of literary art that uses aesthetic and rhythmic qualities of language to evoke meanings in addition to, or in place of, prosaic ostensible meaning (ordinary intended meaning). Poetry has traditionally been distinguished from prose by its being set in verse;[17] prose is cast in sentences, poetry in lines; the syntax of prose is dictated by meaning, whereas that of poetry is held across metre or the visual aspects of the poem.[18]

Prior to the nineteenth century, poetry was commonly understood to be something set in metrical lines; accordingly, in 1658 a definition of poetry is "any kind of subject consisting of Rythm or Verses".[19] Possibly as a result of Aristotle's influence (his Poetics), "poetry" before the nineteenth century was usually less a technical designation for verse than a normative category of fictive or rhetorical art.[20] As a form it may pre-date literacy, with the earliest works being composed within and sustained by an oral tradition;[21] hence it constitutes the earliest example of literature.

Prose is a form of language that possesses ordinary syntax and natural speech rather than rhythmic structure; in which regard, along with its measurement in sentences rather than lines, it differs from poetry.[22] On the historical development of prose, Richard Graff notes that "

Drama is literature intended for performance.[26]

Module-1_Introduction to Literature in English.pdf