Data may come from a population or from a sample. Small letters like
x
or
y
generally are used to represent data values. Most data can be put into the following categories:

All data that are the result of counting are called quantitative discrete data. These data take on only certain numerical values. If you count the number of phone calls you receive for each day of the week, you might get values such as zero, one, two, or three.

It is quantitative discrete data.

The data are the weights of backpacks with books in them. You sample the same five students. The weights (in pounds) of their backpacks are
6.2
,
7
,
6.8
,
9.1
,
4.3
. Notice that backpacks carrying three books can have different weights. Weights are quantitative continuous data because weights are measured.

It is quantitative continuous data.

The table displays Ethnicity of Students but is missing the "Other/Unknown" category. This category contains people who did not feel they fit into any of the ethnicity categories or declined to respond. Notice that the frequencies do not add up to the total number of students. In this situation, create a bar graph and not a pie chart.

The following graph is the same as the previous graph but the "Other/Unknown" percent (
9.6
%) has been included. The "Other/Unknown" category is large compared to some of the other categories (Native American,
0.6
%, Pacific Islander
1.0
%). This is important to know when we think about what the data are telling us.

The following video introduces the different methods that statisticians use collect samples of data.

Gathering information about an entire population often costs too much or is virtually impossible. Instead, we use a sample of the population. A sample should have the same characteristics as the population it is representing. Most statisticians use various methods of random sampling in an attempt to achieve this goal. This section will describe a few of the most common methods. There are several different methods of random sampling. In each form of random sampling, each member of a population initially has an equal chance of being selected for the sample. Each method has pros and cons. The easiest method to describe is called a simple random sample. Any group of
n
individuals is equally likely to be chosen by any other group of
n
individuals if the simple random sampling technique is used. In other words, each sample of the same size has an equal chance of being selected. For example, suppose Lisa wants to form a four-person study group (herself and three other people) from her pre-calculus class, which has
31
members not including Lisa. To choose a simple random sample of size three from the other members of her class, Lisa could put all
31
names in a hat, shake the hat, close her eyes, and pick out three names. A more technological way is for Lisa to first list the last names of the members of her class together with a two-digit number, as in the following table.

Lisa reads two-digit groups until she has chosen three class members (that is, she reads
0.94360
as the groups
94
,
43
,
36
,
60
). Each random number may only contribute one class member. If she needed to, Lisa could have generated more random numbers. 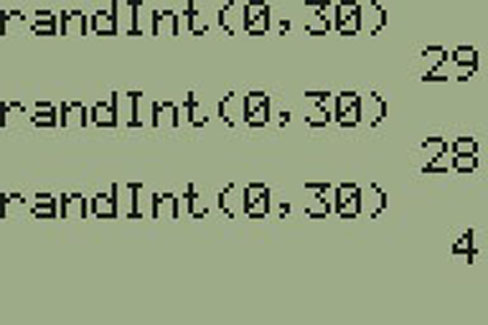 Besides simple random sampling, there are other forms of sampling that involve a chance process for getting the sample. Other well-known random sampling methods are the stratified sample, the cluster sample, and the systematic sample.

To choose a systematic sample, randomly select a starting point and take every
n
th piece of data from a listing of the population. For example, suppose you have to do a phone survey. Your phone book contains
20,000
residence listings. You must choose
400
names for the sample. Number the population
1
–
20,000
and then use a simple random sample to pick a number that represents the first name in the sample. Then choose every fiftieth name thereafter until you have a total of
400
names (you might have to go back to the beginning of your phone list). Systematic sampling is frequently chosen because it is a simple method.

A type of sampling that is non-random is convenience sampling. Convenience sampling involves using results that are readily available. For example, a computer software store conducts a marketing study by interviewing potential customers who happen to be in the store browsing through the available software. The results of convenience sampling may be very good in some cases and highly biased (favor certain outcomes) in others.

Sampling data should be done very carefully. Collecting data carelessly can have devastating results. Surveys mailed to households and then returned may be very biased (they may favor a certain group). It is better for the person conducting the survey to select the sample respondents.

In a college population of
10,000
people, suppose you want to pick a sample of
1,000
randomly for a survey. For any particular sample of
1,000
, if you are sampling with replacement,

If you are sampling without replacement,

Watch the following video to learn more about sources of sampling bias.

ARTS ECMT1020 •  The University of Sydney

Lecture 1B- Introduction to Statistics.pdf

BUS B171 •  The Open University of Hong Kong

Lecture 1A- Introduction to Statistics.pdf