In the example above, Nicole’s earnings can be found by multiplying her sales by her commission. The formula e = 0.16s tells us her earnings, e, come from the product of 0.16, her commission, and the sale price of the vehicle. If we create a table, we observe that as the sales price increases, the earnings increase as well, which should be intuitive.

Notice that earnings are a multiple of sales. As sales increase, earnings increase in a predictable way. Double the sales of the vehicle from $4,600 to $9,200, and we double the earnings from $736 to $1,472. As the input increases, the output increases as a multiple of the input. A relationship in which one quantity is a constant multiplied by another quantity is called direct variation. Each variable in this type of relationship varies directly with the other.

The graph below represents the data for Nicole’s potential earnings. We say that earnings vary directly with the sales price of the car. The formula

y=kxn
is used for direct variation. The value k is a nonzero constant greater than zero and is called the constant of variation. In this case, k = 0.16 and n = 1. 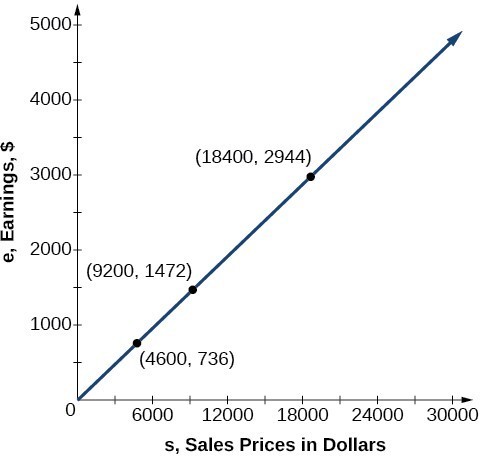 k=xny​
, where k is called the constant of variation, which help defines the relationship between the variables.

How To: Given a description of a direct variation problem, solve for an unknown.

The general formula for direct variation with a cube is

Now use the constant to write an equation that represents this relationship.

Analysis of the Solution

The graph of this equation is a simple cubic, as shown below. 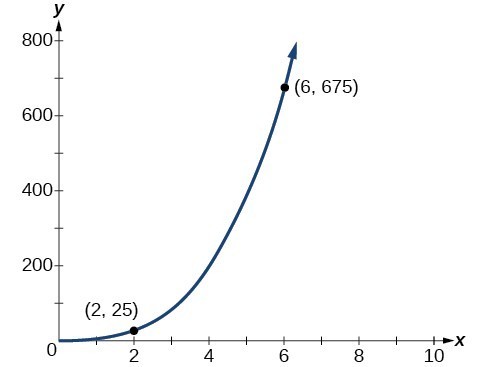 Do the graphs of all direct variation equations look like Example 1?

No. Direct variation equations are power functions—they may be linear, quadratic, cubic, quartic, radical, etc. But all of the graphs pass through (0, 0).