Evolution of Channels of Distribution 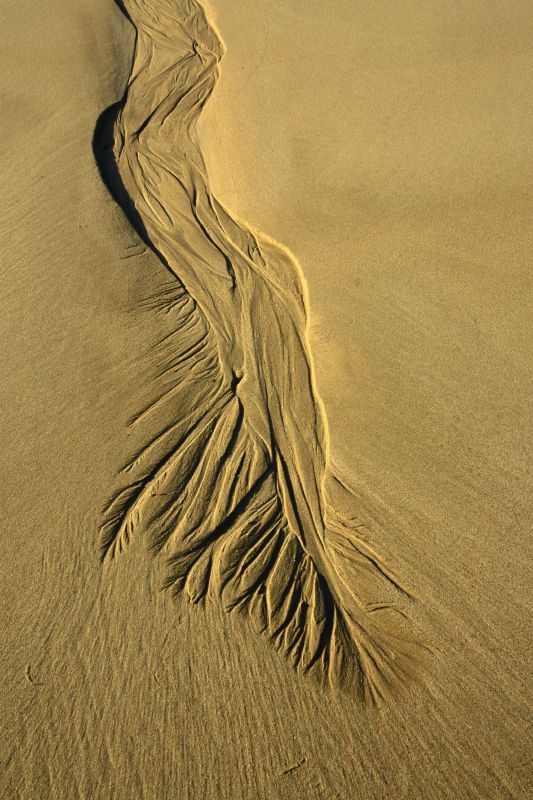 As consumers, we take for granted that when we go to a supermarket the shelves will be filled with the products we want; when we are thirsty there will be a Coke machine or bar around the corner, and we count on being able to get online and find any product available for purchase and quick delivery. Of course, if we give it some thought, we realize that this magic is not a given and that hundreds of thousands of people plan, organize, and labor long hours to make this convenience available. It has not always been this way, and it is still not this way in many other parts of the world.

Looking back over time, the channel structure in primitive culture was virtually nonexistent. The family or tribal group was almost entirely self-sufficient. The group was composed of individuals who were both communal producers and consumers of whatever goods and services could be made available. As economies evolved, people began to specialize in some aspect of economic activity. They engaged in farming, hunting, or fishing, or some other basic craft. Eventually this specialized skill produced excess products, which they exchanged or traded for needed goods that had been produced by others. This exchange process or barter marked the beginning of formal channels of distribution. These early channels involved a series of exchanges between two parties who were producers of one product and consumers of the other.

With the growth of specialization, particularly industrial specialization, and with improvements in methods of transportation and communication, channels of distribution have become longer and more complex. Thus, corn grown in Illinois may be processed into corn chips in West Texas, which are then distributed throughout the United States. Or, turkeys raised in Virginia are sent to New York so that they can be shipped to supermarkets in Virginia. Channels do not always make sense.

The channel mechanism also operates for service products. In the case of medical care, the channel mechanism may consist of a local physician, specialists, hospitals, ambulances, laboratories, insurance companies, physical therapists, home care professionals, and so on. All of these individuals are interdependent and could not operate successfully without the cooperation and capabilities of all the others.

Based on this relationship, we define a channel of distribution, also called a marketing channel,  as sets of interdependent organizations involved in the process of making a product or service available for use or consumption, as well as providing a payment mechanism for the provider.

This definition implies several important characteristics of the channel. First, the channel consists of organizations, some under the control of the producer and some outside the producer's control. Yet all must be recognized, selected, and integrated into an efficient channel arrangement.

Second, the channel management process is continuous and requires continuous monitoring and reappraisal. The channel operates twenty-four hours a day and exists in an environment where change is the norm.

One traditional framework that has been used to express the channel mechanism is the concept of flow. These flows reflect the many linkages that tie channel members and other agencies together in the distribution of goods and services. From the perspective of the channel manager, there are five important flows.

The figure below maps the channel flows for the Monster Energy drink (and many other energy drink brands). Why is Monster's relationship with Coca-Cola so valuable? Every single flow passes through bottlers and distributors in order to arrive in supermarkets where the product will be available to consumers. 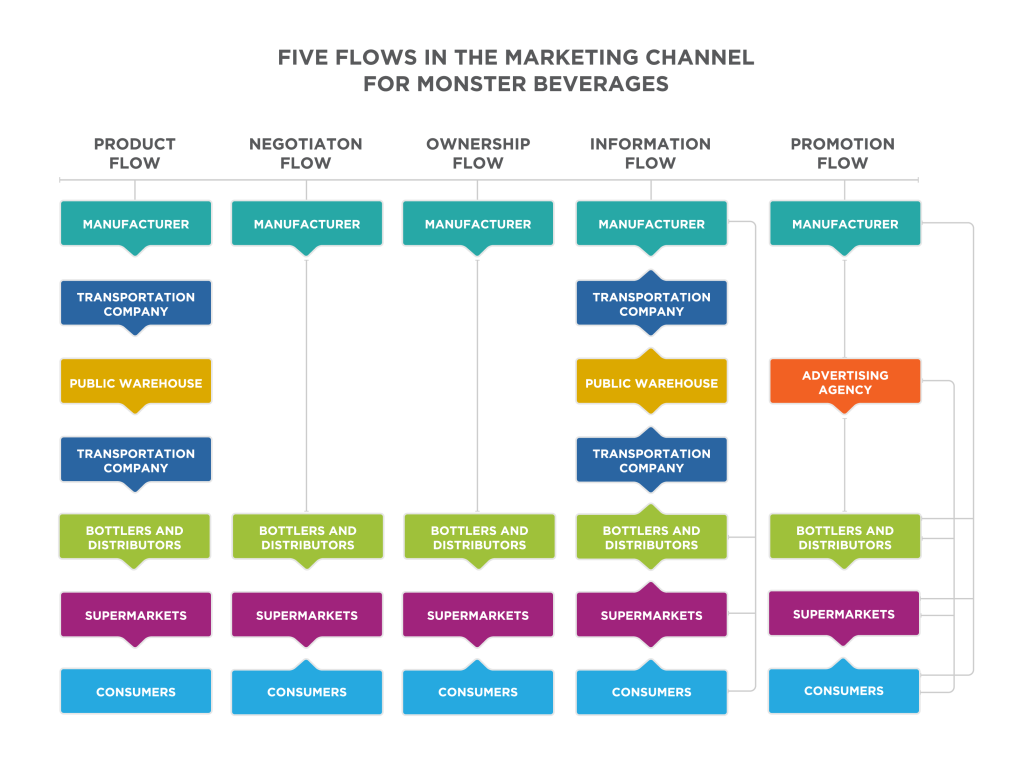 Coca-Cola explains the importance of the bottlers in the distribution network:


While many view our Company as simply "Coca-Cola," our system operates through multiple local channels. Our Company manufactures and sells concentrates, beverage bases and syrups to bottling operations, owns the brands and is responsible for consumer brand marketing initiatives. Our bottling partners manufacture, package, merchandise and distribute the final branded beverages to our customers and vending partners, who then sell our products to consumers.

All bottling partners work closely with customers -- grocery stores, restaurants, street vendors, convenience stores, movie theaters and amusement parks, among many others -- to execute localized strategies developed in partnership with our Company. Customers then sell our products to consumers at a rate of more than 1.9 billion servings a day.[2]

Revisiting the channel flows we find that the bottlers and distributors play a role in each flow. Examples of the flows are listed below. Remember, while the consumer is the individual who eventually consumes the drink, the supermarkets, restaurants, and other outlets are Coca-Cola's customers. 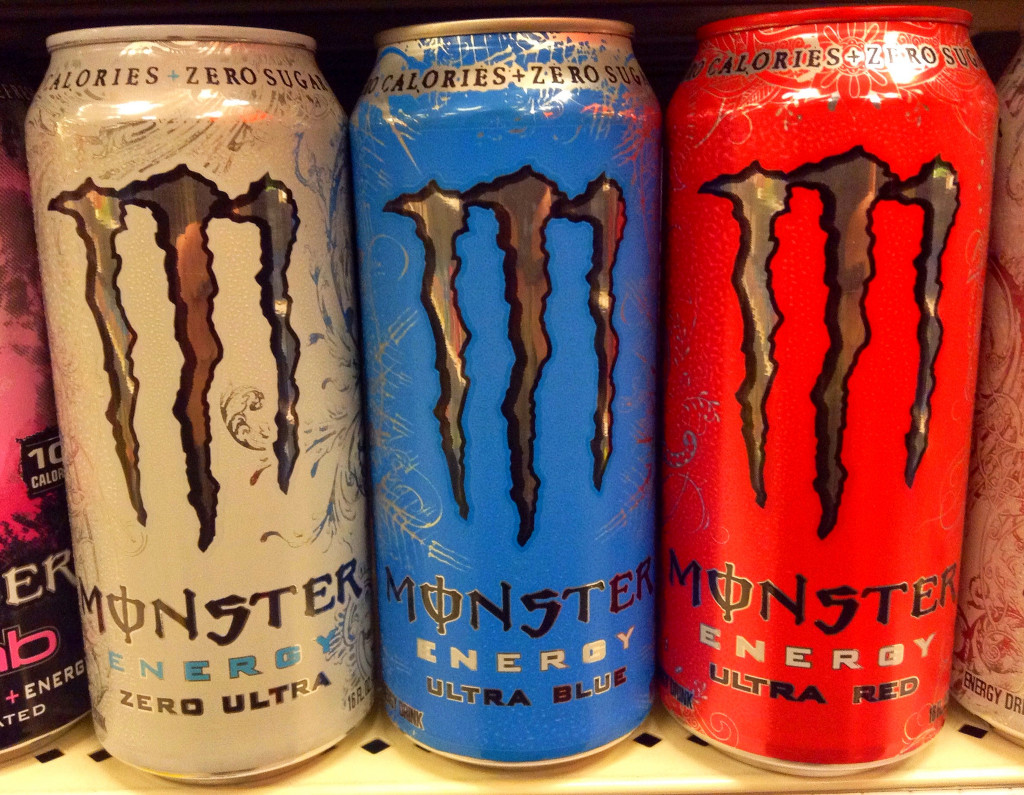 Define what a distribution channel is and discuss why it is important to the marketing process.docx

Developing and Managing Channels of Distribution.pdf

Discuss the distribution channels that are used in the marketing of agricultural produce.docx

4 Types of Distribution Channels in Marketing.pdf

Channels of Distribution in Marketing(1).pdf

Channels of distribution and Social Media.docx

As part of the Marketing Mix, Place, or Channels of Distribution, is important to understand. What i

OTHER 1 •  University of Phoenix

All about the Distribution Channels in Marketing.pdf

BUSINESS A 123 •  University of Santo Tomas

Most Significant Learning in Channels of Distribution.docx

BUSINESS SBCO6198 •  University of the West Indies at Mona