Prepared childbirth refers to being not only physically in good condition to help provide a healthy environment for the baby to develop, but also helping a couple to prepare to accept their new roles as parents and to get information and training that will assist them for delivery and life with the baby as much as possible. The more a couple can learn about childbirth and the newborn, the better prepared they will be for the adjustment they must make to a new life. (Nothing can prepare a couple for this completely). Once a couple finds that they are to have a child, they begin to conjure up images of what they think the experience will involve. Once the child is born, they must reconcile those images with reality (Galinsky, 1987). Knowing more of what to expect does help them in forming more realistic images thus making the adjustment easier. Let's explore some of the methods of prepared childbirth.

The Dick-Read Method of Natural Childbirth

Grantley Dick-Read was an English obstetrician and pioneer of prepared childbirth in the 1930s. In his book Childbirth Without Fear, he suggests that the fear of childbirth increases tension and make the process of childbearing more painful. He believed that if mothers were educated, the fear and tension would be reduced and the need for medication could frequently be eliminated. The Dick-Read method emphasized the use of relaxation and proper breathing with contractions as well as family support and education. (For more current information on this method go to www.hypnobirthing.com) This method influenced the most commonly taught method in the U.S. today, the Lamaze Method.

This method originated in Russia and was brought to the United States in the 1950s by Fernand Lamaze. The emphasis of this method is on teaching the woman to be in control in the process of delivery. It includes learning muscle relaxation, breathing though contractions, having a focal point (usually a picture to look at) during contractions and having a support person who goes through the training process with the mother and serves as a coach during delivery.

Other birthing options include the use of birthing chairs, which make use of gravity in assisting the woman giving birth and the Leboyer Method of "Gentle Birthing". This method involves giving birth in a quiet, dimly lit room and allowing the newborn to lie on the mother's stomach with the umbilical cord intact for sever minutes while being given a warm bath.

Historically in the United States, most babies were born under the care of lay midwives. In the 1920s, middle class women were increasingly using doctors to assist with childbirth but rural women were still being assisted by lay midwives. The nursing profession began educating nurse-midwives to assist these women. Nurse-midwives continued to assist most rural women with delivery until the 1970s and 1980s when their growth is thought to have posed a threat to the medical profession (Weitz, 2007). Since that time, nurse-midwives have found it more difficult to sustain practices with the high costs of malpractice insurance. (Many physicians have changed areas of specialization in response to these costs as well.) Women who are at low risk for birth complications can successfully deliver under the care of nurse-midwives but only 1 percent of births occur at home. Because one out of every 20 births involves a complication, most medical professionals recommend that delivery take place in a hospital. However, some couples choose to have their baby at home. About 1 percent of births occur out of a hospital in the United States.  Two-thirds of these are homebirths and more than half of these are assisted by midwives.  Midwives are trained and licensed to assist in delivery and are far less expensive than the cost of a hospital delivery. One-third of out-of-hospital births occur in freestanding clinics, birthing centers, or in physicians offices or other locations.  In the United States, women who have had previous children, who are over 25 and who are white are more likely to have out-of-hospital births (MacDorman, et. als., 2010).

The Process of Delivery 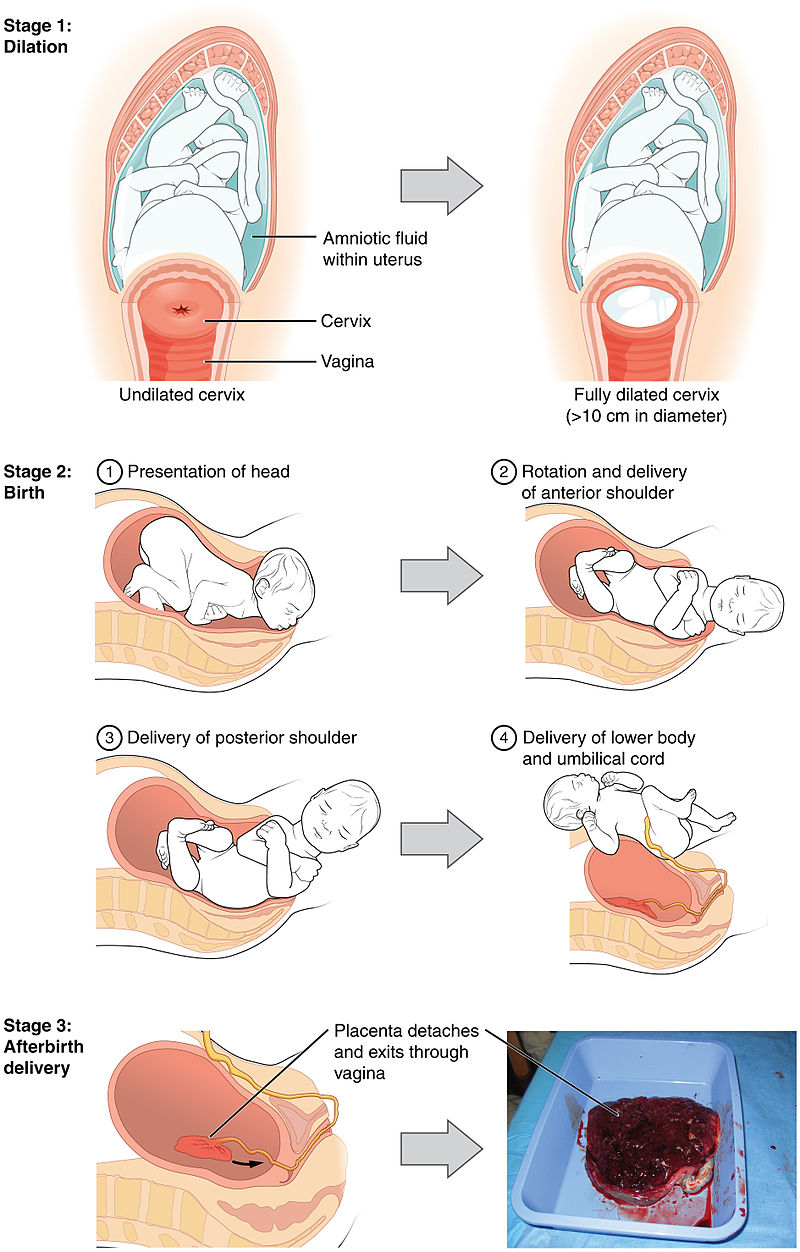 The stages of childbirth.

The First Stage of labor begins with uterine contractions that may initially last about 30 seconds and be spaced 15 to 20 minutes apart. These increase in duration and frequency to more than a minute in length and about 3 to 4 minutes apart. Typically, doctors advise that they be called when contractions are coming about every 5 minutes. Some women experience false labor or Braxton-Hicks contractions, especially with the first child. These may come and go. They tend to diminish when the mother begins walking around. Real labor pains tend to increase with walking. Labor may also be signaled by a bloody discharge being expelled from the cervix. In one out of 8 pregnancies, the amniotic sac or water in which the fetus is suspended may break before labor begins. In such cases, the physician may induce labor with the use of medication if it does not begin in order to reduce the risk of infection.  Normally this sac does not rupture until the later stages of labor.

The first stage of labor is typically the longest. During this stage the cervix or opening to the uterus dilates to 10 centimeters or just under 4 inches. This may take around 12-16 hours for first children or about 6-9 hours for women who have previously given birth. It takes one woman in 9 over 24 hours to dilate completely.  Labor may also begin with a discharge of blood or amniotic fluid.  If the amniotic sack breaks, labor will be induced if necessary to reduce the risk of infection.

The second stage involves the passage of the baby through the birth canal. This stage takes about 10-40 minutes. Contractions usually come about every 2-3 minutes. The mother pushes and relaxes as directed by the medical staff. Normally the head is delivered first. The baby is then rotated so that one shoulder can come through and then the other shoulder. The rest of the baby quickly passes through.   At this stage, an episiotomy may be performed to avoid tearing the tissue of the back of the vaginal opening. The baby's mouth and nose are suctioned out. The umbilical cord is clamped and cut.

The third stage is relatively painless. During this stage, the placenta or afterbirth is delivered. This typically within 20 minutes after delivery. If an episiotomy was performed it is stitched up during this stage.

There are several ways to assess the condition of the newborn. The most widely used tool is the Neonatal Behavioral Assessment Scale (NBAS) developed by T. Berry Brazelton. This tool has been used around the world to help parents get to know their infants and to make comparisons of infants in different cultures (Brazelton & Nugent, 1995). The baby's motor development, muscle tone, and stress response is assessed.  The Apgar is conducted one minute and five minutes after birth. This is a very quick way to assess the newborn's overall condition. Five measures are assessed: the heart rate, respiration, muscle tone (quickly assessed by a skilled nurse when the baby is handed to them or by touching the baby's palm), reflex response (the Babinski reflex is tested), and color. A score of 0 to 2 is given on each feature examined. An Apgar of 5 or less is cause for concern. The second Apgar should indicate improvement with a higher score.

Chapter 3 Birth and the Newborn.docx