Adolescents continue to refine their sense of self as they relate to others. Erikson referred to the task of the adolescent as one of identity versus role confusion. Thus, in Erikson’s view, an adolescent’s main questions are “Who am I?” and “Who do I want to be?” Some adolescents adopt the values and roles that their parents expect for them. Other teens develop identities that are in opposition to their parents but align with a peer group. This is common as peer relationships become a central focus in adolescents’ lives.

As adolescents work to form their identities, they pull away from their parents, and the peer group becomes very important (Shanahan, McHale, Osgood, & Crouter, 2007). Despite spending less time with their parents, most teens report positive feelings toward them (Moore, Guzman, Hair, Lippman, & Garrett, 2004). Warm and healthy parent-child relationships have been associated with positive child outcomes, such as better grades and fewer school behavior problems, in the United States as well as in other countries (Hair et al., 2005).

It appears that most teens don’t experience adolescent storm and stress to the degree once famously suggested by G. Stanley Hall, a pioneer in the study of adolescent development. Only small numbers of teens have major conflicts with their parents (Steinberg & Morris, 2001), and most disagreements are minor. For example, in a study of over 1,800 parents of adolescents from various cultural and ethnic groups, Barber (1994) found that conflicts occurred over day-to-day issues such as homework, money, curfews, clothing, chores, and friends. These types of arguments tend to decrease as teens develop (Galambos & Almeida, 1992).

Parents. Although peers take on greater importance during adolescence, family relationships remain important too. One of the key changes during adolescence involves a renegotiation of parent–child relationships. As adolescents strive for more independence and autonomy during this time, different aspects of parenting become more salient. For example, parents’ distal supervision and monitoring become more important as adolescents spend more time away from parents and in the presence of peers. Parental monitoring encompasses a wide range of behaviors such as parents’ attempts to set rules and know their adolescents’ friends, activities, and whereabouts, in addition to adolescents’ willingness to disclose information to their parents (Stattin & Kerr, 2000[19]). Psychological control, which involves manipulation and intrusion into adolescents’ emotional and cognitive world through invalidating adolescents’ feelings and pressuring them to think in particular ways (Barber, 1996[20]), is another aspect of parenting that becomes more salient during adolescence and is related to more problematic adolescent adjustment.

As children become adolescents, they usually begin spending more time with their peers and less time with their families, and these peer interactions are increasingly unsupervised by adults. Children’s notions of friendship often focus on shared activities, whereas adolescents’ notions of friendship increasingly focus on intimate exchanges of thoughts and feelings. During adolescence, peer groups evolve from primarily single-sex to mixed-sex. Adolescents within a peer group tend to be similar to one another in behavior and attitudes, which has been explained as being a function of homophily (adolescents who are similar to one another choose to spend time together in a “birds of a feather flock together” way) and influence (adolescents who spend time together shape each other’s behavior and attitudes). One of the most widely studied aspects of adolescent peer influence is known as deviant peer contagion (Dishion & Tipsord, 2011[21]), which is the process by which peers reinforce problem behavior by laughing or showing other signs of approval that then increase the likelihood of future problem behavior.

Peers can serve both positive and negative functions during adolescence. Negative peer pressure can lead adolescents to make riskier decisions or engage in more problematic behavior than they would alone or in the presence of their family. For example, adolescents are much more likely to drink alcohol, use drugs, and commit crimes when they are with their friends than when they are alone or with their family. However, peers also serve as an important source of social support and companionship during adolescence, and adolescents with positive peer relationships are happier and better adjusted than those who are socially isolated or have conflictual peer relationships. 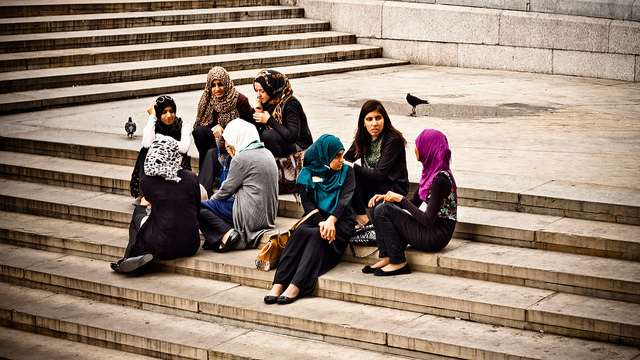 Crowds refer to different collections of people, like the “theater kids” or the “environmentalists.” In a way, they are kind of like clothing brands that label the people associated with that crowd. [Image: Garry Knight]
Crowds are an emerging level of peer relationships in adolescence. In contrast to friendships (which are reciprocal dyadic relationships) and cliques (which refer to groups of individuals who interact frequently), crowds are characterized more by shared reputations or images than actual interactions (Brown & Larson, 2009[22]). These crowds reflect different prototypic identities (such as jocks or brains) and are often linked with adolescents’ social status and peers’ perceptions of their values or behaviors.

Furthermore, romantic relationships are centrally connected to adolescents’ emerging sexuality. Parents, policymakers, and researchers have devoted a great deal of attention to adolescents’ sexuality, in large part because of concerns related to sexual intercourse, contraception, and preventing teen pregnancies. However, sexuality involves more than this narrow focus. For example, adolescence is often when individuals who are lesbian, gay, bisexual, or transgender come to perceive themselves as such (Russell, Clarke, & Clary, 2009[25]). Thus, romantic relationships are a domain in which adolescents experiment with new behaviors and identities.

Theories of adolescent development often focus on identity formation as a central issue. For example, in Erikson’s (1968[26]) classic theory of developmental stages, identity formation was highlighted as the primary indicator of successful development during adolescence (in contrast to role confusion, which would be an indicator of not successfully meeting the task of adolescence). Marcia (1966[27]) described identify formation during adolescence as involving both decision points and commitments with respect to ideologies (e.g., religion, politics) and occupations. He described four identity statuses: foreclosure, identity diffusion, moratorium, and identity achievement. Foreclosure occurs when an individual commits to an identity without exploring options. Identity diffusion occurs when adolescents neither explore nor commit to any identities. Moratorium is a state in which adolescents are actively exploring options but have not yet made commitments. Identity achievement occurs when individuals have explored different options and then made identity commitments. Building on this work, other researchers have investigated more specific aspects of identity. For example, Phinney (1989[28]) proposed a model of ethnic identity development that included stages of unexplored ethnic identity, ethnic identity search, and achieved ethnic identity.

Developmental models of anxiety and depression also treat adolescence as an important period, especially in terms of the emergence of gender differences in prevalence rates that persist through adulthood (Rudolph, 2009[31]). Starting in early adolescence, compared with males, females have rates of anxiety that are about twice as high and rates of depression that are 1.5 to 3 times as high (American Psychiatric Association, 2013[32]). Although the rates vary across specific anxiety and depression diagnoses, rates for some disorders are markedly higher in adolescence than in childhood or adulthood. For example, prevalence rates for specific phobias are about 5% in children and 3%–5% in adults but 16% in adolescents. Anxiety and depression are particularly concerning because suicide is one of the leading causes of death during adolescence. Developmental models focus on interpersonal contexts in both childhood and adolescence that foster depression and anxiety (e.g., Rudolph, 2009[33]). Family adversity, such as abuse and parental psychopathology, during childhood sets the stage for social and behavioral problems during adolescence. Adolescents with such problems generate stress in their relationships (e.g., by resolving conflict poorly and excessively seeking reassurance) and select into more maladaptive social contexts (e.g., “misery loves company” scenarios in which depressed youths select other depressed youths as friends and then frequently co-ruminate as they discuss their problems, exacerbating negative affect and stress). These processes are intensified for girls compared with boys because girls have more relationship-oriented goals related to intimacy and social approval, leaving them more vulnerable to disruption in these relationships. Anxiety and depression then exacerbate problems in social relationships, which in turn contribute to the stability of anxiety and depression over time.

Adolescents spend more waking time in school than in any other context (Eccles & Roeser, 2011[34]). Academic achievement during adolescence is predicted by interpersonal (e.g., parental engagement in adolescents’ education), intrapersonal (e.g., intrinsic motivation), and institutional (e.g., school quality) factors. Academic achievement is important in its own right as a marker of positive adjustment during adolescence but also because academic achievement sets the stage for future educational and occupational opportunities. The most serious consequence of school failure, particularly dropping out of school, is the high risk of unemployment or underemployment in adulthood that follows. High achievement can set the stage for college or future vocational training and opportunities.

Adolescent development does not necessarily follow the same pathway for all individuals. Certain features of adolescence, particularly with respect to biological changes associated with puberty and cognitive changes associated with brain development, are relatively universal. But other features of adolescence depend largely on circumstances that are more environmentally variable. For example, adolescents growing up in one country might have different opportunities for risk taking than adolescents in a different country, and supports and sanctions for different behaviors in adolescence depend on laws and values that might be specific to where adolescents live. Likewise, different cultural norms regarding family and peer relationships shape adolescents’ experiences in these domains. For example, in some countries, adolescents’ parents are expected to retain control over major decisions, whereas in other countries, adolescents are expected to begin sharing in or taking control of decision making.

Even within the same country, adolescents’ gender, ethnicity, immigrant status, religion, sexual orientation, socioeconomic status, and personality can shape both how adolescents behave and how others respond to them, creating diverse developmental contexts for different adolescents. For example, early puberty (that occurs before most other peers have experienced puberty) appears to be associated with worse outcomes for girls than boys, likely in part because girls who enter puberty early tend to associate with older boys, which in turn is associated with early sexual behavior and substance use. For adolescents who are ethnic or sexual minorities, discrimination sometimes presents a set of challenges that nonminorities do not face.

Finally, genetic variations contribute an additional source of diversity in adolescence. Current approaches emphasize gene X environment interactions, which often follow a differential susceptibility model (Belsky & Pluess, 2009[35]). That is, particular genetic variations are considered riskier than others, but genetic variations also can make adolescents more or less susceptible to environmental factors. For example, the association between the CHRM2genotype and adolescent externalizing behavior (aggression and delinquency)has been found in adolescents whose parents are low in monitoring behaviors (Dick et al., 2011[36]). Thus, it is important to bear in mind that individual differences play an important role in adolescent development.

Adolescent development is characterized by biological, cognitive, and social changes. Social changes are particularly notable as adolescents become more autonomous from their parents, spend more time with peers, and begin exploring romantic relationships and sexuality. Adjustment during adolescence is reflected in identity formation, which often involves a period of exploration followed by commitments to particular identities. Adolescence is characterized by risky behavior, which is made more likely by changes in the brain in which reward-processing centers develop more rapidly than cognitive control systems, making adolescents more sensitive to rewards than to possible negative consequences. Despite these generalizations, factors such as country of residence, gender, ethnicity, and sexual orientation shape development in ways that lead to diversity of experiences across adolescence.

Chapter 5: Development Through the Lifespan

PSYC 1001 •  University of the West Indies at St. Augustine