The Process of Dying

One way to understand death and dying is to look more closely at physical death, psychological death, and social death. These deaths do not occur simultaneously. Rather, a person's physiological, social, and psychic death can occur at different times (Pattison, 1977).

Physiological death occurs when the vital organs no longer function. The digestive and respiratory systems begin to shut down during the gradual process of dying. A dying person no longer wants to eat as digestion slows and the digestive track loses moisture and chewing, swallowing, and elimination become painful processes. Circulation slows and mottling or the pooling of blood may be noticeable on the underside of the body appearing much like bruising. Breathing becomes more sporadic and shallow and may make a rattling sound as air travels through mucus filled passageways. The person often sleeps more and more and may talk less although continues to hear.  The kinds of symptoms noted prior to death in patients under hospice care (care focused on helping patients die as comfortably as possible) is noted below. 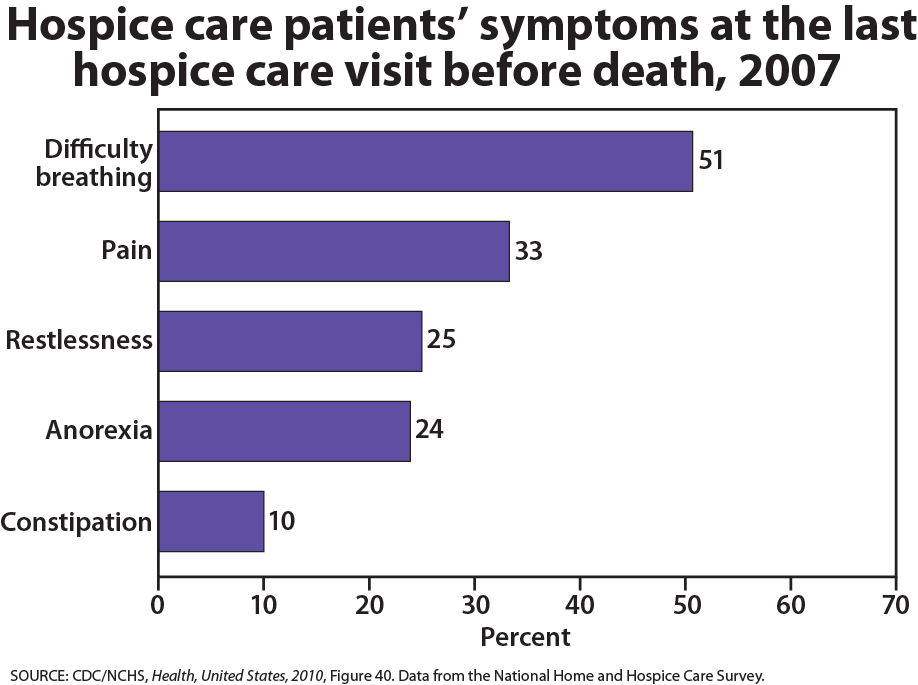 When a person no longer has brain activity, they are clinically dead. Physiological death may take 72 or fewer hours.

Social death begins much earlier than physiological death. Social death occurs when others begin to withdraw from someone who is terminally ill or has been diagnosed with a terminal illness. Those diagnosed with conditions such as AIDS or cancer may find that friends, family members, and even health care professionals begin to say less and visit less frequently. Meaningful discussions may be replaced with comments about the weather or other topics of light conversation. Doctors may spend less time with patients after their prognosis becomes poor. Why do others begin to withdraw? Friends and family members may feel that they do not know what to say or that they can offer no solutions to relieve suffering. They withdraw to protect themselves against feeling inadequate or from having to face the reality of death. Health professionals, trained to heal, may also feel inadequate and uncomfortable facing decline and death. A patient who is dying may be referred to as "circling the drain" meaning that they are approaching death. People in nursing homes may live as socially dead for years with no one visiting or calling. Social support is important for quality of life and those who experience social death are deprived from the benefits that come from loving interaction with others.

Psychic death occurs when the dying person begins to accept death and to withdraw from others and regress into the self. This can take place long before physiological death (or even social death if others are still supporting and visiting the dying person) and can even bring physiological death closer. People have some control over the timing of their death and can hold on until after important occasions or die quickly after having lost someone important to them. They can give up their will to live.

BSA 1 •  Polytechnic University of the Philippines

PSY MISC •  The University of Oklahoma

AConsider the lifespan development process and describe the .docx

The Process of Dying

PY B203 •  Queensland University of Technology