Diseases of the Immune System


In 1970, artist Walt Kelly developed a poster promoting Earth Day, featuring a character from Pogo, his daily newspaper comic strip. In the poster, Pogo looks out across a litter-strewn forest and says wryly, "We have met the enemy and he is us." Pogo was not talking about the human immune system, but he very well could have been. Although the immune system protects the body by attacking invading "enemies" (pathogens), in some cases, the immune system can mistakenly identify the body’s own cells as the enemy, resulting in autoimmune disease.

The causes of autoimmune disease are a combination of the individual's genetic makeup and the effect of environmental influences, such as sunlight, infections, medications, and environmental chemicals. However, the vagueness of this list reflects our poor understanding of the etiology of these diseases. Except in a very few specific diseases, the initiation event(s) of most autoimmune states has not been fully characterized.

There are several possible causes for the origin of autoimmune diseases and autoimmunity is likely due to several factors. Evidence now suggests that regulatory T and B cells play an essential role in the maintenance of tolerance and prevention of autoimmune responses. The regulatory T cells are especially important for inhibiting autoreactive T cells that are not eliminated during thymic selection and escape the thymus (see T Lymphocytes and Cellular Immunity). In addition, antigen mimicry between pathogen antigens and our own self antigens can lead to cross-reactivity and autoimmunity. Hidden self-antigens may become exposed because of trauma, drug interactions, or disease states, and trigger an autoimmune response. All of these factors could contribute to autoimmunity. Ultimately, damage to tissues and organs in the autoimmune disease state comes as a result of inflammatory responses that are inappropriate; therefore, treatment often includes immunosuppressive drugs and corticosteroids.

Celiac disease is largely a disease of the small intestine, although other organs may be affected. People in their 30s and 40s, and children are most commonly affected, but celiac disease can begin at any age. It results from a reaction to proteins, commonly called gluten, found mainly in wheat, barley, rye, and some other grains. The disease has several genetic causes (predispositions) and poorly understood environmental influences. On exposure to gluten, the body produces various autoantibodies and an inflammatory response. The inflammatory response in the small intestine leads to a reduction in the depth of the microvilli of the mucosa, which hinders absorption and can lead to weight loss and anemia. The disease is also characterized by diarrhea and abdominal pain, symptoms that are often misdiagnosed as irritable bowel syndrome.

Diagnosis of celiac disease is accomplished from serological tests for the presence of primarily IgA antibodies to components of gluten, the transglutinaminase enzyme, and autoantibodies to endomysium, a connective tissue surrounding muscle fibers. Serological tests are typically followed up with endoscopy and biopsy of the duodenal mucosa. Serological screening surveys have found about 1% of individuals in the United Kingdom are positive even though they do not all display symptoms.[5] This early recognition allows for more careful monitoring and prevention of severe disease.

Celiac disease is treated with complete removal of gluten-containing foods from the diet, which results in improved symptoms and reduced risk of complications. Other theoretical approaches include breeding grains that do not contain the immunologically reactive components or developing dietary supplements that contain enzymes that break down the protein components that cause the immune response.[6]

Disorders of the Thyroid

Graves disease is the most common cause of hyperthyroidism in the United States. Symptoms of Graves disease result from the production of thyroid-stimulating immunoglobulin (TSI) also called TSH-receptor antibody. TSI targets and binds to the receptor for thyroid stimulating hormone (TSH), which is naturally produced by the pituitary gland. TSI may cause conflicting symptoms because it may stimulate the thyroid to make too much thyroid hormone or block thyroid hormone production entirely, making diagnosis more difficult. Signs and symptoms of Graves disease include heat intolerance, rapid and irregular heartbeat, weight loss, goiter (a swollen thyroid gland, protruding under the skin of the throat and exophthalmia (bulging eyes) often referred to as Graves ophthalmopathy.

The most common cause of hypothyroidism in the United States is Hashimoto thyroiditis, also called chronic lymphocytic thyroiditis. Patients with Hashimoto thyroiditis often develop a spectrum of different diseases because they are more likely to develop additional autoimmune diseases such as Addison disease (discussed later in this section), type 1 diabetes, rheumatoid arthritis, and celiac disease. Hashimoto thyroiditis is a TH1 cell-mediated disease that occurs when the thyroid gland is attacked by cytotoxic lymphocytes, macrophages, and autoantibodies. This autoimmune response leads to numerous symptoms that include goiter, cold intolerance, muscle weakness, painful and stiff joints, depression, and memory loss. 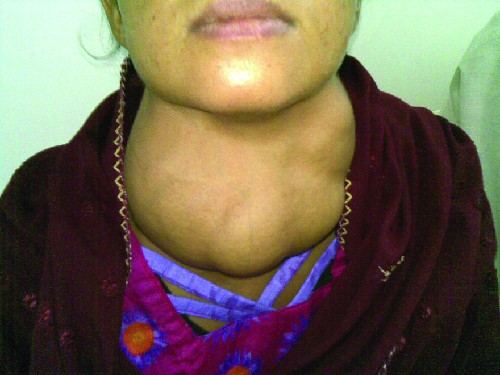 Figure 1. Goiter, a hypertrophy of the thyroid, is a symptom of Graves disease and Hashimoto thyroiditis. 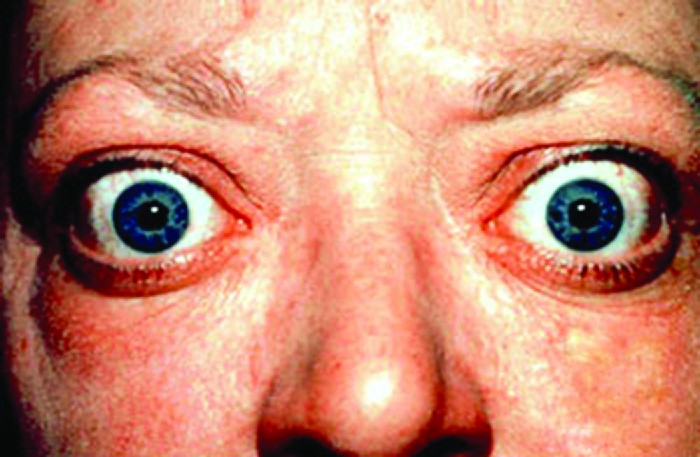 Juvenile diabetes, or type 1 diabetes mellitus, is usually diagnosed in children and young adults. It is a T-cell-dependent autoimmune disease characterized by the selective destruction of the β cells of the islets of Langerhans in the pancreas by CD4 TH1-mediated CD8 T cells, anti-β-cell antibodies, and macrophage activity. There is also evidence that viral infections can have either a potentiating or inhibitory role in the development of type 1 diabetes (T1D) mellitus. The destruction of the β cells causes a lack of insulin production by the pancreas. In T1D, β-cell destruction may take place over several years, but symptoms of hyperglycemia, extreme increase in thirst and urination, weight loss, and extreme fatigue usually have a sudden onset, and diagnosis usually does not occur until most β cells have already been destroyed.

Destruction of the adrenal glands (the glands lying above the kidneys that produce glucocorticoids, mineralocorticoids, and sex steroids) is the cause of Addison disease, also called primary adrenal insufficiency (PAI). Today, up to 80% of Addison disease cases are diagnosed as autoimmune Addison disease (AAD), which is caused by an autoimmune response to adrenal tissues disrupting adrenal function. Disruption of adrenal function causes impaired metabolic processes that require normal steroid hormone levels, causing signs and symptoms throughout the body. There is evidence that both humoral and CD4 TH1-driven CD8 T-cell–mediated immune mechanisms are directed at the adrenal cortex in AAD. There is also evidence that the autoimmune response is associated with autoimmune destruction of other endocrine glands as well, such as the pancreas and thyroid, conditions collectively referred to as autoimmune polyendocrine syndromes (APS). In up to 80% of patients with AAD, antibodies are produced to three enzymes involved in steroid synthesis: 21-hydroxylase (21-OH), 17α-hydroxylase, and cholesterol side-chain–cleaving enzyme.[7] The most common autoantibody found in AAD is to 21-OH, and antibodies to any of the key enzymes for steroid production are diagnostic for AAD. The adrenal cortex cells are targeted, destroyed, and replaced with fibrous tissue by immune-mediated inflammation. In some patients, at least 90% of the adrenal cortex is destroyed before symptoms become diagnostic. 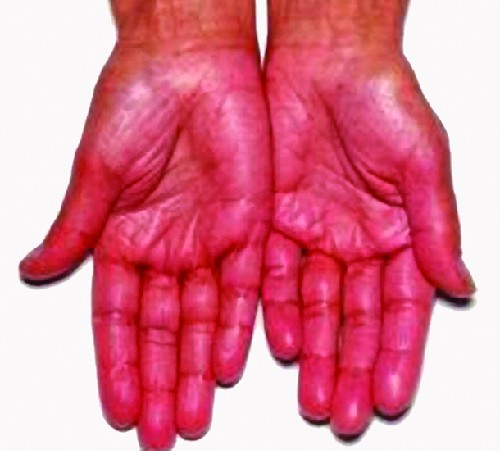 Figure 3. Hyperpigmentation is a sign of Addison disease. (credit: modification of work by Petros Perros)

Multiple sclerosis (MS) is an autoimmune central nervous system disease that affects the brain and spinal cord. Lesions in multiple locations within the central nervous system are a hallmark of multiple sclerosis and are caused by infiltration of immune cells across the blood-brain barrier. The immune cells include T cells that promote inflammation, demyelination, and neuron degeneration, all of which disrupt neuronal signaling. Symptoms of MS include visual disturbances; muscle weakness; difficulty with coordination and balance; sensations such as numbness, prickling, or "pins and needles"; and cognitive and memory problems.

Regardless of the mechanism, the effect of anti-AChR is extreme muscle weakness and potentially death through respiratory arrest in severe cases. 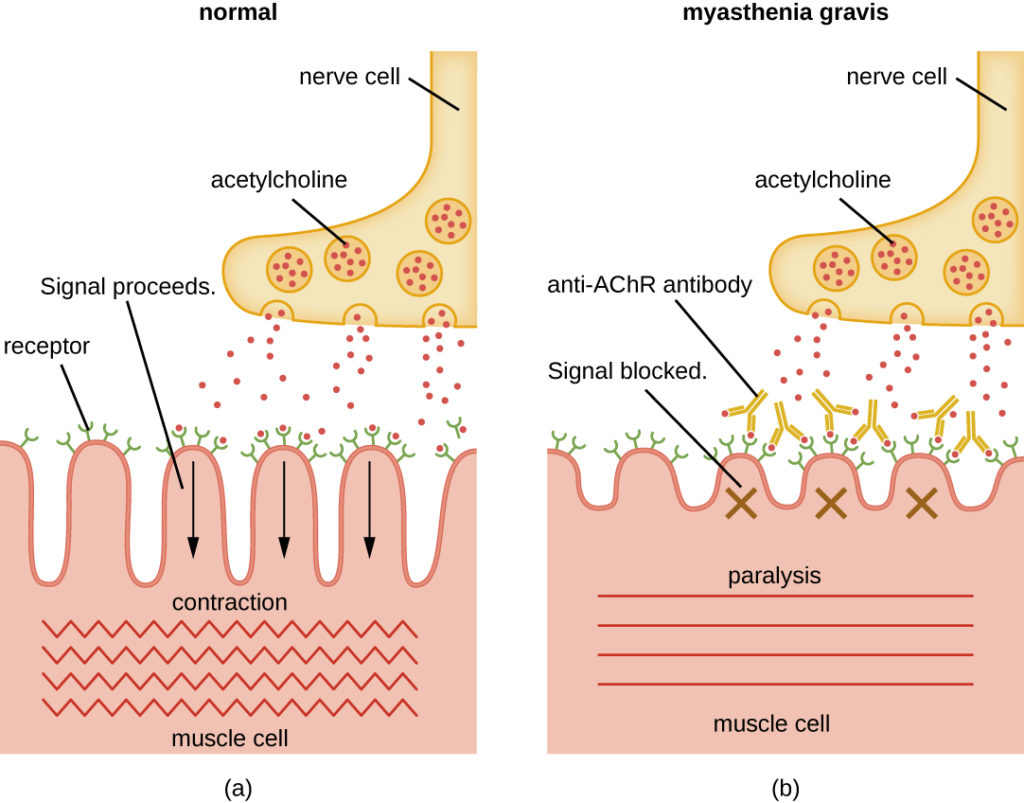 Psoriasis is a skin disease that causes itchy or sore patches of thick, red skin with silvery scales on elbows, knees, scalp, back, face, palms, feet, and sometimes other areas. Some individuals with psoriasis also get a form of arthritis called psoriatic arthritis, in which the joints can become inflamed. Psoriasis results from the complex interplay between keratinocytes, dendritic cells, and T cells, and the cytokines produced by these various cells. In a process called cell turnover, skin cells that grow deep in the skin rise to the surface. Normally, this process takes a month. In psoriasis, as a result of cytokine activation, cell turnover happens in just a few days. The thick inflamed patches of skin that are characteristic of psoriasis develop because the skin cells rise too fast.

The most common chronic inflammatory joint disease is rheumatoid arthritis (RA) and it is still a major medical challenge because of unsolved questions related to the environmental and genetic causes of the disease. RA involves type III hypersensitivity reactions and the activation of CD4 T cells, resulting in chronic release of the inflammatory cytokines IL-1, IL-6, and tumor necrosis factor-α (TNF-α). The activated CD4 T cells also stimulate the production of rheumatoid factor (RF) antibodies and anticyclic citrullinated peptide antibodies (anti-CCP) that form immune complexes. Increased levels of acute-phase proteins, such as C-reactive protein (CRP), are also produced as part of the inflammatory process and participate in complement fixation with the antibodies on the immune complexes. The formation of immune complexes and reaction to the immune factors cause an inflammatory process in joints, particularly in the hands, feet, and legs. Diagnosis of RA is based on elevated levels of RF, anti-CCP, quantitative CRP, and the erythrocyte sedimentation rate (ESR) (modified Westergren). In addition, radiographs, ultrasound, or magnetic resonance imaging scans can identify joint damage, such as erosions, a loss of bone within the joint, and narrowing of joint space.

Figure 5. The radiograph (left) and photograph (right) show damage to the hands typical of rheumatoid arthritis. (credit right: modification of work by "handarmdoc"/Flickr)

The damage and pathology of systemic lupus erythematosus (SLE) is caused by type III hypersensitivity reactions. Autoantibodies produced in SLE are directed against nuclear and cytoplasmic proteins. Anti-nuclear antibodies (ANAs) are present in more than 95% of patients with SLE,[8] with additional autoantibodies including anti-double–stranded DNA (ds-DNA) and anti-Sm antibodies (antibodies to small nuclear ribonucleoprotein). Anti-ds-DNA and anti-Sm antibodies are unique to patients with SLE; thus, their presence is included in the classification criteria of SLE. Cellular interaction with autoantibodies leads to nuclear and cellular destruction, with components released after cell death leading to the formation of immune complexes.

Because autoantibodies in SLE can target a wide variety of cells, symptoms of SLE can occur in many body locations. However, the most common symptoms include fatigue, fever with no other cause, hair loss, and a sunlight-sensitive "butterfly" or wolf-mask (lupus) rash that is found in about 50% of people with SLE. The rash is most often seen over the cheeks and bridge of the nose, but can be widespread. Other symptoms may appear depending on affected areas. The joints may be affected, leading to arthritis of the fingers, hands, wrists, and knees. Effects on the brain and nervous system can lead to headaches, numbness, tingling, seizures, vision problems, and personality changes. There may also be abdominal pain, nausea, vomiting, arrhythmias, shortness of breath, and blood in the sputum. Effects on the skin can lead to additional areas of skin lesions, and vasoconstriction can cause color changes in the fingers when they are cold (Raynaud phenomenon). Effects on the kidneys can lead to edema in the legs and weight gain. A diagnosis of SLE depends on identification of four of 11 of the most common symptoms and confirmed production of an array of autoantibodies unique to SLE. A positive test for ANAs alone is not diagnostic. 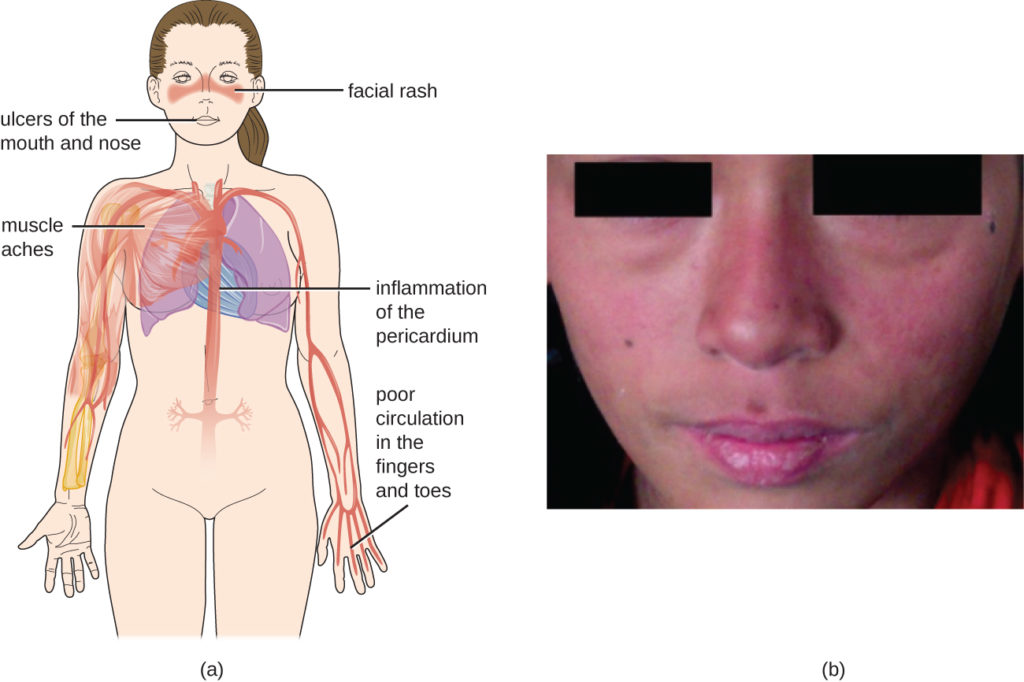 
The table below summarizes the causes, signs, and symptoms of select autoimmune diseases.

Which of the following is an example of an organ-specific autoimmune disease?

c. Addison disease is an example of an organ-specific autoimmune disease.

Which of the following is an example of a systemic autoimmune disease?

d. Myasthenia gravis is an example of a systemic autoimmune disease.