Red blood cells are primarily responsible for carrying oxygen to tissues. Platelets are cellular fragments that participate in blood clot formation and tissue repair. Several different types of WBCs participate in various nonspecific mechanisms of innate and adaptive immunity. In this section, we will focus primarily on the innate mechanisms of various types of WBCs.

All of the formed elements of blood are derived from pluripotent hematopoietic stem cells (HSCs) in the bone marrow. As the HSCs make copies of themselves in the bone marrow, individual cells receive different cues from the body that control how they develop and mature. As a result, the HSCs differentiate into different types of blood cells that, once mature, circulate in peripheral blood. This process of differentiation, called hematopoiesis, is shown in more detail in Figure 1. 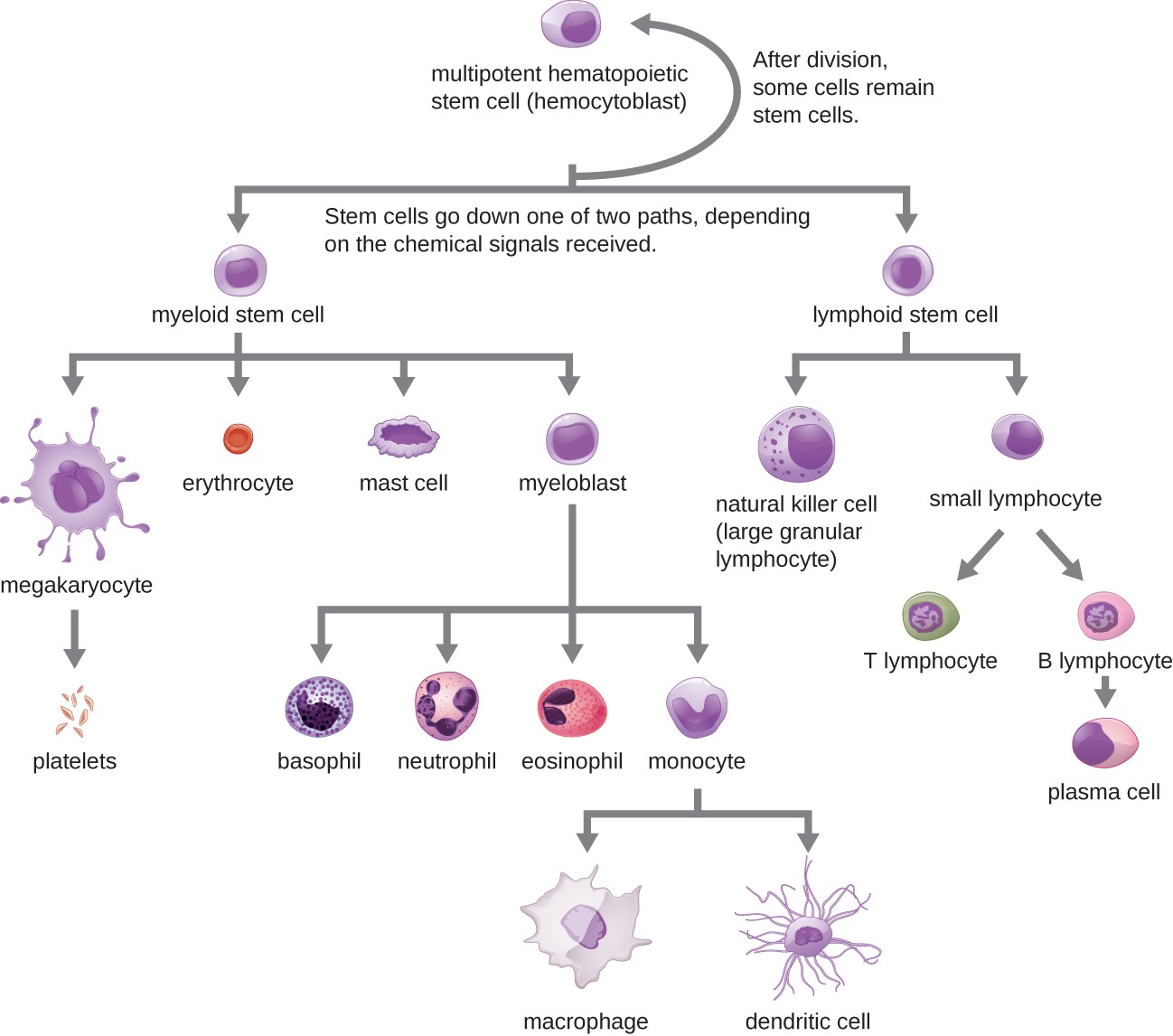 Figure 1. Click for a larger image. All the formed elements of the blood arise by differentiation of hematopoietic stem cells in the bone marrow.

In terms of sheer numbers, the vast majority of HSCs become erythrocytes. Much smaller numbers become leukocytes and platelets. Leukocytes can be further subdivided into granulocytes, which are characterized by numerous granules visible in the cytoplasm, and agranulocytes, which lack granules. Figure 2 provides an overview of the various types of formed elements, including their relative numbers, primary function, and lifespans. 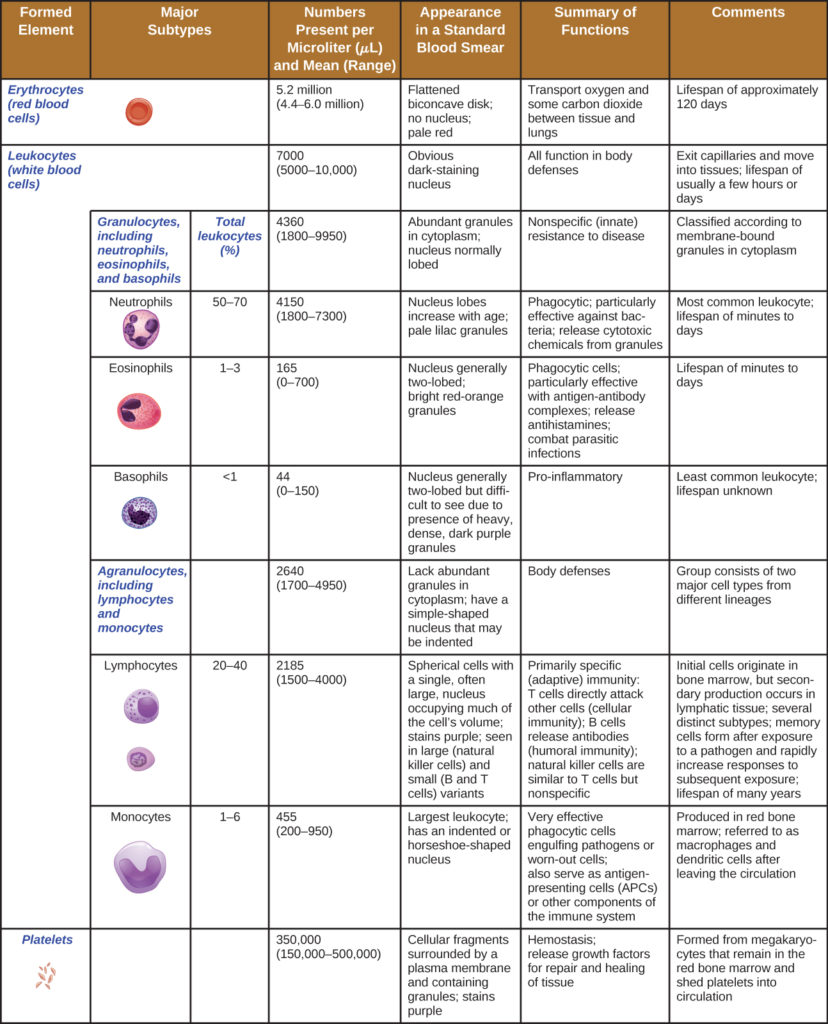 The various types of granulocytes can be distinguished from one another in a blood smear by the appearance of their nuclei and the contents of their granules, which confer different traits, functions, and staining properties. The neutrophils, also called polymorphonuclear neutrophils (PMNs), have a nucleus with three to five lobes and small, numerous, lilac-colored granules. Each lobe of the nucleus is connected by a thin strand of material to the other lobes. The eosinophils have fewer lobes in the nucleus (typically 2–3) and larger granules that stain reddish-orange. The basophils have a two-lobed nucleus and large granules that stain dark blue or purple (Figure 3). 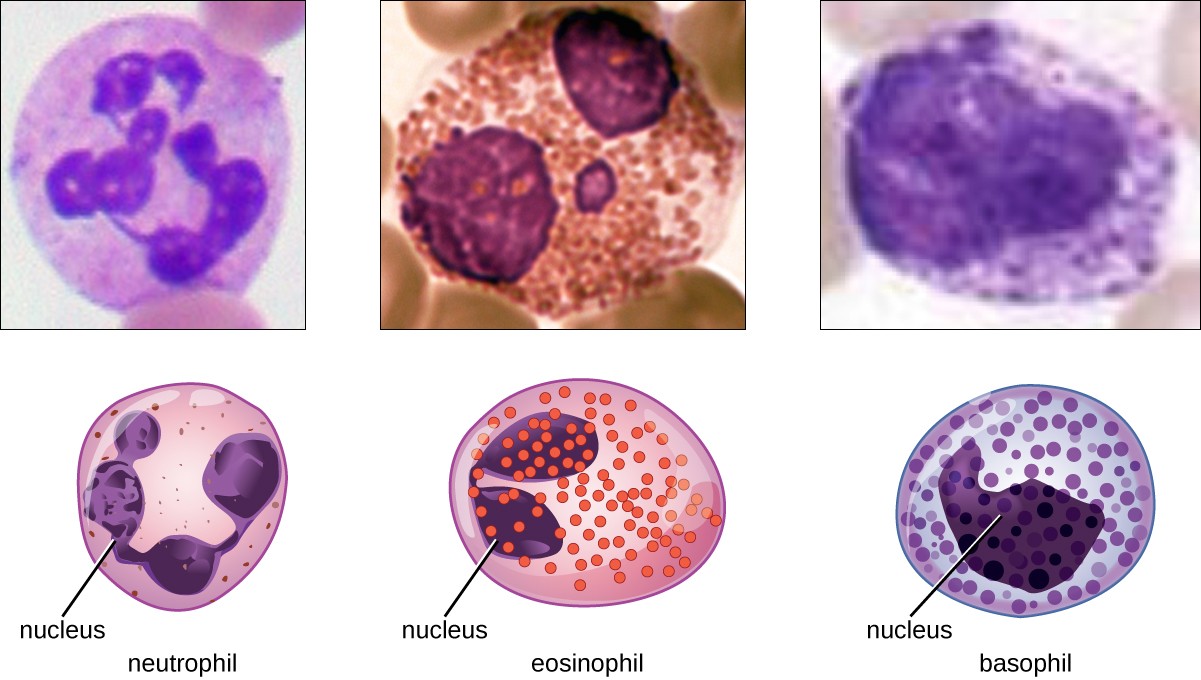 Figure 3. Granulocytes can be distinguished by the number of lobes in their nuclei and the staining properties of their granules. (credit "neutrophil" micrograph: modification of work by Ed Uthman)

Neutrophils (PMNs) are frequently involved in the elimination and destruction of extracellular bacteria. They are capable of migrating through the walls of blood vessels to areas of bacterial infection and tissue damage, where they seek out and kill infectious bacteria. PMN granules contain a variety of defensins and hydrolytic enzymes that help them destroy bacteria through phagocytosis (described in more detail in Pathogen Recognition and Phagocytosis) In addition, when many neutrophils are brought into an infected area, they can be stimulated to release toxic molecules into the surrounding tissue to better clear infectious agents. This is called degranulation.

Another mechanism used by neutrophils is neutrophil extracellular traps (NETs), which are extruded meshes of chromatin that are closely associated with antimicrobial granule proteins and components. Chromatin is DNA with associated proteins (usually histone proteins, around which DNA wraps for organization and packing within a cell). By creating and releasing a mesh or lattice-like structure of chromatin that is coupled with antimicrobial proteins, the neutrophils can mount a highly concentrated and efficient attack against nearby pathogens. Proteins frequently associated with NETs include lactoferrin, gelatinase, cathepsin G, and myeloperoxidase. Each has a different means of promoting antimicrobial activity, helping neutrophils eliminate pathogens. The toxic proteins in NETs may kill some of the body’s own cells along with invading pathogens. However, this collateral damage can be repaired after the danger of the infection has been eliminated.

As neutrophils fight an infection, a visible accumulation of leukocytes, cellular debris, and bacteria at the site of infection can be observed. This buildup is what we call pus (also known as purulent or suppurative discharge or drainage). The presence of pus is a sign that the immune defenses have been activated against an infection; historically, some physicians believed that inducing pus formation could actually promote the healing of wounds. The practice of promoting "laudable pus" (by, for instance, wrapping a wound in greasy wool soaked in wine) dates back to the ancient physician Galen in the 2nd century AD, and was practiced in variant forms until the 17th century (though it was not universally accepted). Today, this method is no longer practiced because we now know that it is not effective. Although a small amount of pus formation can indicate a strong immune response, artificially inducing pus formation does not promote recovery.

Eosinophils are granulocytes that protect against protozoa and helminths; they also play a role in allergic reactions. The granules of eosinophils, which readily absorb the acidic reddish dye eosin, contain histamine, degradative enzymes, and a compound known as major basic protein (MBP) (Figure 3). MBP binds to the surface carbohydrates of parasites, and this binding is associated with disruption of the cell membrane and membrane permeability.

Basophils have cytoplasmic granules of varied size and are named for their granules’ ability to absorb the basic dye methylene blue (Figure 3). Their stimulation and degranulation can result from multiple triggering events. Activated complement fragments C3a and C5a, produced in the activation cascades of complement proteins, act as anaphylatoxins by inducing degranulation of basophils and inflammatory responses. This cell type is important in allergic reactions and other responses that involve inflammation. One of the most abundant components of basophil granules is histamine, which is released along with other chemical factors when the basophil is stimulated. These chemicals can be chemotactic and can help to open the gaps between cells in the blood vessels. Other mechanisms for basophil triggering require the assistance of antibodies, as discussed in B Lymphocytes and Humoral Immunity.

Hematopoiesis also gives rise to mast cells, which appear to be derived from the same common myeloid progenitor cell as neutrophils, eosinophils, and basophils. Functionally, mast cells are very similar to basophils, containing many of the same components in their granules (e.g., histamine) and playing a similar role in allergic responses and other inflammatory reactions. However, unlike basophils, mast cells leave the circulating blood and are most frequently found residing in tissues. They are often associated with blood vessels and nerves or found close to surfaces that interface with the external environment, such as the skin and mucous membranes in various regions of the body (Figure 4).

This example continues Angela’s story that started in the Introduction and Chemical Defenses.

Angela’s tests come back negative for all common allergens, and her sputum samples contain no abnormal presence of pathogenic microbes or elevated levels of members of the normal respiratory microbiota. She does, however, have elevated levels of inflammatory cytokines in her blood.

The swelling of her airway has still not responded to treatment with antihistamines or corticosteroids. Additional blood work shows that Angela has a mildly elevated white blood cell count but normal antibody levels. Also, she has a lower-than-normal level of the complement protein C4.

As their name suggests, agranulocytes lack visible granules in the cytoplasm. Agranulocytes can be categorized as lymphocytes or monocytes (Figure 2). Among the lymphocytes are natural killer cells, which play an important role in nonspecific innate immune defenses. Lymphocytes also include the B cells and T cells, which are discussed in the next chapter because they are central players in the specific adaptive immune defenses. The monocytes differentiate into macrophages and dendritic cells, which are collectively referred to as the mononuclear phagocyte system.

Most lymphocytes are primarily involved in the specific adaptive immune response, and thus will be discussed in the following chapter. An exception is the natural killer cells (NK cells); these mononuclear lymphocytes use nonspecific mechanisms to recognize and destroy cells that are abnormal in some way. Cancer cells and cells infected with viruses are two examples of cellular abnormalities that are targeted by NK cells. Recognition of such cells involves a complex process of identifying inhibitory and activating molecular markers on the surface of the target cell. Molecular markers that make up the major histocompatibility complex (MHC) are expressed by healthy cells as an indication of "self." This will be covered in more detail in next chapter. NK cells are able to recognize normal MHC markers on the surface of healthy cells, and these MHC markers serve as an inhibitory signal preventing NK cell activation. However, cancer cells and virus-infected cells actively diminish or eliminate expression of MHC markers on their surface. When these MHC markers are diminished or absent, the NK cell interprets this as an abnormality and a cell in distress. This is one part of the NK cell activation process (Figure 5). NK cells are also activated by binding to activating molecular molecules on the target cell. These activating molecular molecules include "altered self" or "nonself" molecules. When a NK cell recognizes a decrease in inhibitory normal MHC molecules and an increase in activating molecules on the surface of a cell, the NK cell will be activated to eliminate the cell in distress. 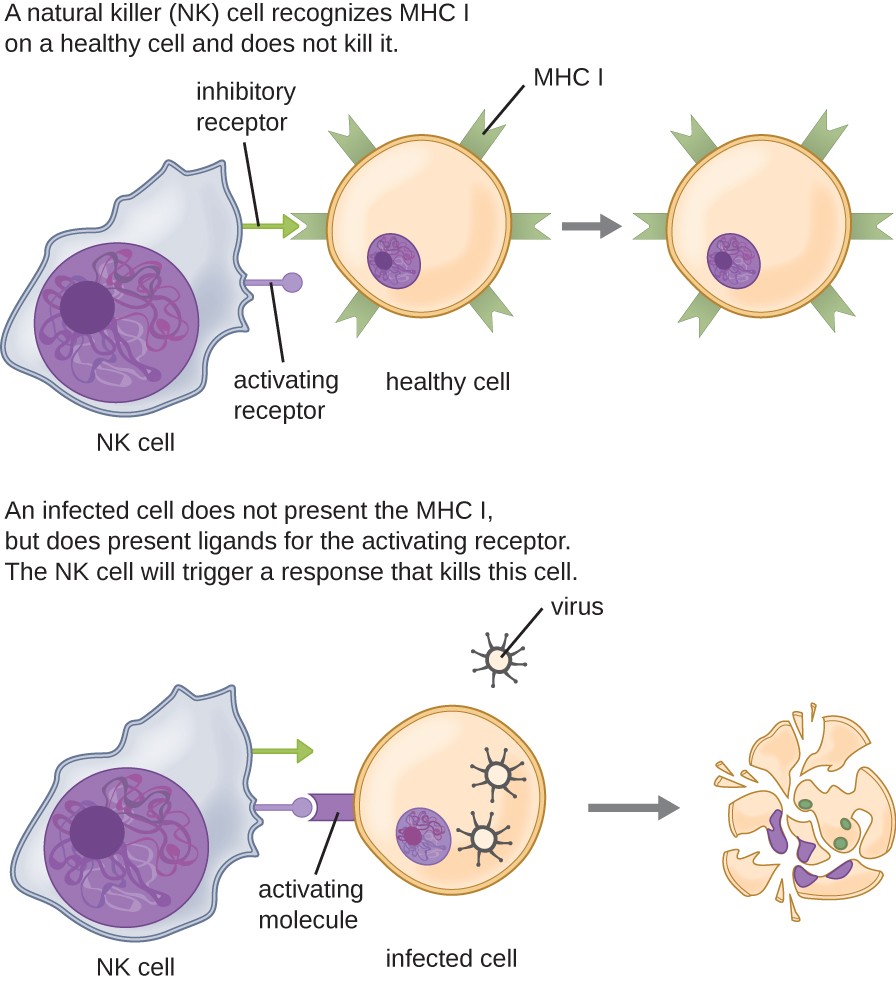 Figure 5. Click to view a larger image. Natural killer (NK) cells are inhibited by the presence of the major histocompatibility cell (MHC) receptor on healthy cells. Cancer cells and virus-infected cells have reduced expression of MHC and increased expression of activating molecules. When a NK cell recognizes decreased MHC and increased activating molecules, it will kill the abnormal cell. 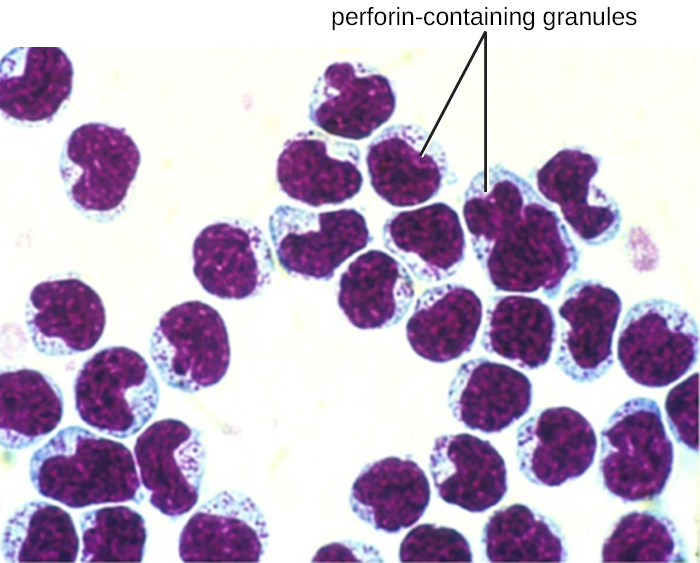 NK cells contain these toxic compounds in granules in their cytoplasm. When stained, the granules are azurophilic and can be visualized under a light microscope (Figure 6). Even though they have granules, NK cells are not considered granulocytes because their granules are far less numerous than those found in true granulocytes. Furthermore, NK cells have a different lineage than granulocytes, arising from lymphoid rather than myeloid stem cells (Figure 1).

The largest of the white blood cells, monocytes have a nucleus that lacks lobes, and they also lack granules in the cytoplasm (Figure 7). Nevertheless, they are effective phagocytes, engulfing pathogens and apoptotic cells to help fight infection.

When monocytes leave the bloodstream and enter a specific body tissue, they differentiate into tissue-specific phagocytes called macrophages and dendritic cells. They are particularly important residents of lymphoid tissue, as well as nonlymphoid sites and organs. Macrophages and dendritic cells can reside in body tissues for significant lengths of time. Macrophages in specific body tissues develop characteristics suited to the particular tissue. Not only do they provide immune protection for the tissue in which they reside but they also support normal function of their neighboring tissue cells through the production of cytokines. Macrophages are given tissue-specific names, and a few examples of tissue-specific macrophages are listed in Table 1. Dendritic cells are important sentinels residing in the skin and mucous membranes, which are portals of entry for many pathogens. Monocytes, macrophages, and dendritic cells are all highly phagocytic and important promoters of the immune response through their production and release of cytokines. These cells provide an essential bridge between innate and adaptive immune responses, as discussed in the next section as well as the next chapter.

White blood cells are also referred to as which of the following?

Hematopoiesis occurs in which of the following?

Granulocytes are which type of cell?

Match each cell type with its description.

Match each cellular defense with the infection it would most likely target.

The cell in the bone marrow that gives rise to all other blood cell types is the ________.

The cell in the bone marrow that gives rise to all other blood cell types is the pluripotent hematopoietic stem cell (HSC).

PMNs are another name for neutrophils.

Kupffer cells residing in the liver are a type of macrophage.

_____________ are similar to basophils, but reside in tissues rather than circulating in the blood.

Mast cells are similar to basophils, but reside in tissues rather than circulating in the blood.

PH 151 •  University of the Philippines Visayas

Lab 14 Cells and tissues of the immune system.docx