The inflammatory response, or inflammation, is triggered by a cascade of chemical mediators and cellular responses that may occur when cells are damaged and stressed or when pathogens successfully breach the physical barriers of the innate immune system. Although inflammation is typically associated with negative consequences of injury or disease, it is a necessary process insofar as it allows for recruitment of the cellular defenses needed to eliminate pathogens, remove damaged and dead cells, and initiate repair mechanisms. Excessive inflammation, however, can result in local tissue damage and, in severe cases, may even become deadly.

An early, if not immediate, response to tissue injury is acute inflammation. Immediately following an injury, vasoconstriction of blood vessels will occur to minimize blood loss. The amount of vasoconstriction is related to the amount of vascular injury, but it is usually brief. Vasoconstriction is followed by vasodilation and increased vascular permeability, as a direct result of the release of histamine from resident mast cells. Increased blood flow and vascular permeability can dilute toxins and bacterial products at the site of injury or infection. They also contribute to the five observable signs associated with the inflammatory response: erythema (redness), edema (swelling), heat, pain, and altered function. Vasodilation and increased vascular permeability are also associated with an influx of phagocytes at the site of injury and/or infection. This can enhance the inflammatory response because phagocytes may release proinflammatory chemicals when they are activated by cellular distress signals released from damaged cells, by PAMPs, or by opsonins on the surface of pathogens. Activation of the complement system can further enhance the inflammatory response through the production of the anaphylatoxin C5a. Figure 1 illustrates a typical case of acute inflammation at the site of a skin wound.

Figure 1. (a) Mast cells detect injury to nearby cells and release histamine, initiating an inflammatory response. (b) Histamine increases blood flow to the wound site, and increased vascular permeability allows fluid, proteins, phagocytes, and other immune cells to enter infected tissue. These events result in the swelling and reddening of the injured site, and the increased blood flow to the injured site causes it to feel warm. Inflammation is also associated with pain due to these events stimulating nerve pain receptors in the tissue. The interaction of phagocyte PRRs with cellular distress signals and PAMPs and opsonins on the surface of pathogens leads to the release of more proinflammatory chemicals, enhancing the inflammatory response.

During the period of inflammation, the release of bradykinin causes capillaries to remain dilated, flooding tissues with fluids and leading to edema. Increasing numbers of neutrophils are recruited to the area to fight pathogens. As the fight rages on, pus forms from the accumulation of neutrophils, dead cells, tissue fluids, and lymph. Typically, after a few days, macrophages will help to clear out this pus. Eventually, tissue repair can begin in the wounded area. 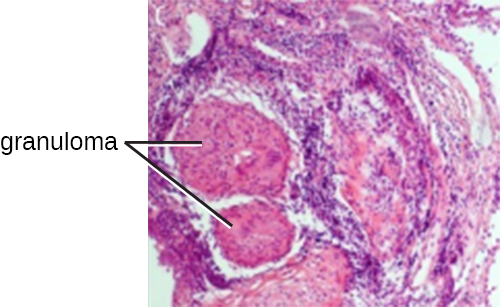 Figure 2. A tubercle is a granuloma in the lung tissue of a patient with tuberculosis. In this micrograph, white blood cells (stained purple) have walled off a pocket of tissue infected with Mycobacterium tuberculosis. Granulomas also occur in many other forms of disease. (credit: modification of work by Piotrowski WJ, Górski P, Duda-Szymańska J, Kwiatkowska S)

When acute inflammation is unable to clear an infectious pathogen, chronic inflammation may occur. This often results in an ongoing (and sometimes futile) lower-level battle between the host organism and the pathogen. The wounded area may heal at a superficial level, but pathogens may still be present in deeper tissues, stimulating ongoing inflammation. Additionally, chronic inflammation may be involved in the progression of degenerative neurological diseases such as Alzheimer’s and Parkinson’s, heart disease, and metastatic cancer.

Chronic inflammation may lead to the formation of granulomas, pockets of infected tissue walled off and surrounded by WBCs. Macrophages and other phagocytes wage an unsuccessful battle to eliminate the pathogens and dead cellular materials within a granuloma. One example of a disease that produces chronic inflammation is tuberculosis, which results in the formation of granulomas in lung tissues. A tubercular granuloma is called a tubercle (Figure 2). Tuberculosis will be covered in more detail in Bacterial Infections of the Respiratory Tract. 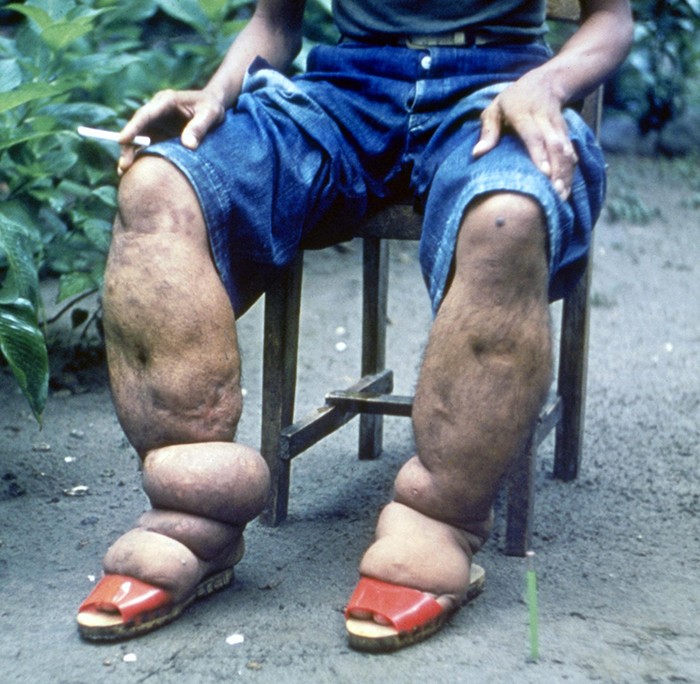 Figure 3. Elephantiasis (chronic edema) of the legs due to filariasis. (credit: modification of work by Centers for Disease Control and Prevention)

In addition to granulomas, chronic inflammation can also result in long-term edema. A condition known as lymphatic filariasis (also known as elephantiasis) provides an extreme example. Lymphatic filariasis is caused by microscopic nematodes (parasitic worms) whose larvae are transmitted between human hosts by mosquitoes. Adult worms live in the lymphatic vessels, where their presence stimulates infiltration by lymphocytes, plasma cells, eosinophils, and thrombocytes (a condition known as lymphangitis). Because of the chronic nature of the illness, granulomas, fibrosis, and blocking of the lymphatic system may eventually occur. Over time, these blockages may worsen with repeated infections over decades, leading to skin thickened with edema and fibrosis. Lymph (extracellular tissue fluid) may spill out of the lymphatic areas and back into tissues, causing extreme swelling (Figure 3). Secondary bacterial infections commonly follow. Because it is a disease caused by a parasite, eosinophilia (a dramatic rise in the number of eosinophils in the blood) is characteristic of acute infection. However, this increase in antiparasite granulocytes is not sufficient to clear the infection in many cases.

A fever is an inflammatory response that extends beyond the site of infection and affects the entire body, resulting in an overall increase in body temperature. Body temperature is normally regulated and maintained by the hypothalamus, an anatomical section of the brain that functions to maintain homeostasis in the body. However, certain bacterial or viral infections can result in the production of pyrogens, chemicals that effectively alter the "thermostat setting" of the hypothalamus to elevate body temperature and cause fever. Pyrogens may be exogenous or endogenous. For example, the endotoxin lipopolysaccharide (LPS), produced by gram-negative bacteria, is an exogenous pyrogen that may induce the leukocytes to release endogenous pyrogens such as interleukin-1 (IL-1), IL-6, interferon-γ (IFN-γ), and tumor necrosis factor (TNF). In a cascading effect, these molecules can then lead to the release of prostaglandin E2 (PGE2) from other cells, resetting the hypothalamus to initiate fever (Figure 4). 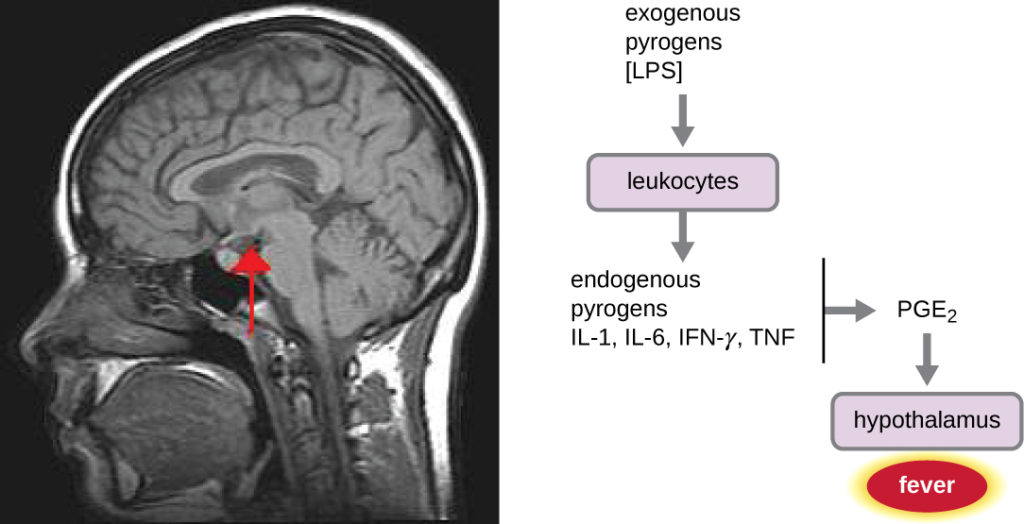 Like other forms of inflammation, a fever enhances the innate immune defenses by stimulating leukocytes to kill pathogens. The rise in body temperature also may inhibit the growth of many pathogens since human pathogens are mesophiles with optimum growth occurring around 35 °C (95 °F). In addition, some studies suggest that fever may also stimulate release of iron-sequestering compounds from the liver, thereby starving out microbes that rely on iron for growth.[4]

During fever, the skin may appear pale due to vasoconstriction of the blood vessels in the skin, which is mediated by the hypothalamus to divert blood flow away from extremities, minimizing the loss of heat and raising the core temperature. The hypothalamus will also stimulate shivering of muscles, another effective mechanism of generating heat and raising the core temperature.

Although a low-level fever may help an individual overcome an illness, in some instances, this immune response can be too strong, causing tissue and organ damage and, in severe cases, even death. The inflammatory response to bacterial superantigens is one scenario in which a life-threatening fever may develop. Superantigens are bacterial or viral proteins that can cause an excessive activation of T cells from the specific adaptive immune defense, as well as an excessive release of cytokines that overstimulates the inflammatory response. For example, Staphylococcus aureus and Streptococcus pyogenes are capable of producing superantigens that cause toxic shock syndrome and scarlet fever, respectively. Both of these conditions can be associated with very high, life-threatening fevers in excess of 42 °C (108 °F).

This example concludes Angela’s story that started in the Introduction, Chemical Defenses, and Cellular Defenses.

Given her father’s premature death, Angela’s doctor suspects that she has hereditary angioedema, a genetic disorder that compromises the function of C1 inhibitor protein. Patients with this genetic abnormality may have occasional episodes of swelling in various parts of the body. In Angela’s case, the swelling has occurred in the respiratory tract, leading to difficulty breathing. Swelling may also occur in the gastrointestinal tract, causing abdominal cramping, diarrhea, and vomiting, or in the muscles of the face or limbs. This swelling may be nonresponsive to steroid treatment and is often misdiagnosed as an allergy.

Because there are three types of hereditary angioedema, the doctor orders a more specific blood test to look for levels of C1-INH, as well as a functional assay of Angela’s C1 inhibitors. The results suggest that Angela has type I hereditary angioedema, which accounts for 80%–85% of all cases. This form of the disorder is caused by a deficiency in C1 esterase inhibitors, the proteins that normally help suppress activation of the complement system. When these proteins are deficient or nonfunctional, overstimulation of the system can lead to production of inflammatory anaphylatoxins, which results in swelling and fluid buildup in tissues.

There is no cure for hereditary angioedema, but timely treatment with purified and concentrated C1-INH from blood donors can be effective, preventing tragic outcomes like the one suffered by Angela’s father. A number of therapeutic drugs, either currently approved or in late-stage human trials, may also be considered as options for treatment in the near future. These drugs work by inhibiting inflammatory molecules or the receptors for inflammatory molecules.

Thankfully, Angela’s condition was quickly diagnosed and treated. Although she may experience additional episodes in the future, her prognosis is good and she can expect to live a relatively normal life provided she seeks treatment at the onset of symptoms.

Which refers to swelling as a result of inflammation?

Answer b. "Edema" refers to swelling as a result of inflammation.

Which type of inflammation occurs at the site of an injury or infection?

Answer a. Acute inflammation occurs at the site of an injury or infection.

A(n) ________ is a walled-off area of infected tissue that exhibits chronic inflammation.

A granuloma is a walled-off area of infected tissue that exhibits chronic inflammation.

The ________ is the part of the body responsible for regulating body temperature.

The hypothalamus is the part of the body responsible for regulating body temperature.

Heat and redness, or ________, occur when the small blood vessels in an inflamed area dilate (open up), bringing more blood much closer to the surface of the skin.

Heat and redness, or erythema, occur when the small blood vessels in an inflamed area dilate (open up), bringing more blood much closer to the surface of the skin.

Differentiate exogenous and endogenous pyrogens, and provide an example of each.

If a gram-negative bacterial infection reaches the bloodstream, large quantities of LPS can be released into the blood, resulting in a syndrome called septic shock. Death due to septic shock is a real danger. The overwhelming immune and inflammatory responses that occur with septic shock can cause a perilous drop in blood pressure; intravascular blood clotting; development of thrombi and emboli that block blood vessels, leading to tissue death; failure of multiple organs; and death of the patient. Identify and characterize two to three therapies that might be useful in stopping the dangerous events and outcomes of septic shock once it has begun, given what you have learned about inflammation and innate immunity in this chapter.