Describe the chemical composition of lipids


Although they are composed primarily of carbon and hydrogen, lipid molecules may also contain oxygen, nitrogen, sulfur, and phosphorous. Lipids serve numerous and diverse purposes in the structure and functions of organisms. They can be a source of nutrients, a storage form for carbon, energy-storage molecules, or structural components of membranes and hormones. Lipids comprise a broad class of many chemically distinct compounds, the most common of which are discussed in this section.

A triacylglycerol, or triglyceride, is formed when three fatty acids are chemically linked to a glycerol molecule (Figure 1). Triglycerides are the primary components of adipose tissue (body fat), and are major constituents of sebum (skin oils). They play an important metabolic role, serving as efficient energy-storage molecules that can provide more than double the caloric content of both carbohydrates and proteins.

Figure 1. Triglycerides are composed of a glycerol molecule attached to three fatty acids by a dehydration synthesis reaction. 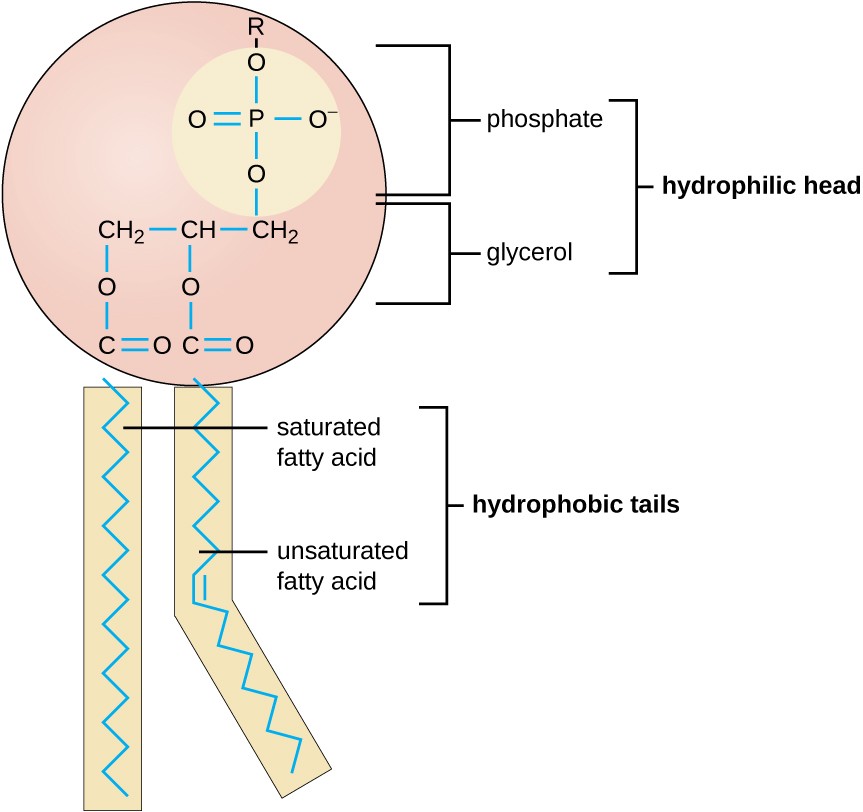 Figure 2. This illustration shows a phospholipid with two different fatty acids, one saturated and one unsaturated, bonded to the glycerol molecule. The unsaturated fatty acid has a slight kink in its structure due to the double bond.

Triglycerides are classified as simple lipids because they are formed from just two types of compounds: glycerol and fatty acids. In contrast, complex lipids contain at least one additional component, for example, a phosphate group (phospholipids) or a carbohydrate moiety (glycolipids). Figure 2 depicts a typical phospholipid composed of two fatty acids linked to glycerol (a diglyceride). The two fatty acid carbon chains may be both saturated, both unsaturated, or one of each. Instead of another fatty acid molecule (as for triglycerides), the third binding position on the glycerol molecule is occupied by a modified phosphate group.

The molecular structure of lipids results in unique behavior in aqueous environments. Figure 1 depicts the structure of a triglyceride. Because all three substituents on the glycerol backbone are long hydrocarbon chains, these compounds are nonpolar and not significantly attracted to polar water molecules—they are hydrophobic. Conversely, phospholipids such as the one shown in Figure 2 have a negatively charged phosphate group. Because the phosphate is charged, it is capable of strong attraction to water molecules and thus is hydrophilic, or "water loving." The hydrophilic portion of the phospholipid is often referred to as a polar "head," and the long hydrocarbon chains as nonpolar "tails." A molecule presenting a hydrophobic portion and a hydrophilic moiety is said to be amphipathic. Notice the "R" designation within the hydrophilic head depicted in Figure 2, indicating that a polar head group can be more complex than a simple phosphate moiety. Glycolipids are examples in which carbohydrates are bonded to the lipids’ head groups.

The amphipathic nature of phospholipids enables them to form uniquely functional structures in aqueous environments. As mentioned, the polar heads of these molecules are strongly attracted to water molecules, and the nonpolar tails are not. Because of their considerable lengths, these tails are, in fact, strongly attracted to one another. As a result, energetically stable, large-scale assemblies of phospholipid molecules are formed in which the hydrophobic tails congregate within enclosed regions, shielded from contact with water by the polar heads (Figure 3). The simplest of these structures are micelles, spherical assemblies containing a hydrophobic interior of phospholipid tails and an outer surface of polar head groups. Larger and more complex structures are created from lipid-bilayer sheets, or unit membranes, which are large, two-dimensional assemblies of phospholipids congregated tail to tail. The cell membranes of nearly all organisms are made from lipid-bilayer sheets, as are the membranes of many intracellular components. These sheets may also form lipid-bilayer spheres that are the structural basis of vesicles and liposomes, subcellular components that play a role in numerous physiological functions.

The isoprenoids are branched lipids, also referred to as terpenoids, that are formed by chemical modifications of the isoprene molecule (Figure 4). These lipids play a wide variety of physiological roles in plants and animals, with many technological uses as pharmaceuticals (capsaicin), pigments (e.g., orange beta carotene, xanthophylls), and fragrances (e.g., menthol, camphor, limonene [lemon fragrance], and pinene [pine fragrance]). Long-chain isoprenoids are also found in hydrophobic oils and waxes. Waxes are typically water resistant and hard at room temperature, but they soften when heated and liquefy if warmed adequately. In humans, the main wax production occurs within the sebaceous glands of hair follicles in the skin, resulting in a secreted material called sebum, which consists mainly of triacylglycerol, wax esters, and the hydrocarbon squalene. There are many bacteria in the microbiota on the skin that feed on these lipids. One of the most prominent bacteria that feed on lipids is Propionibacterium acnes, which uses the skin’s lipids to generate short-chain fatty acids and is involved in the production of acne. 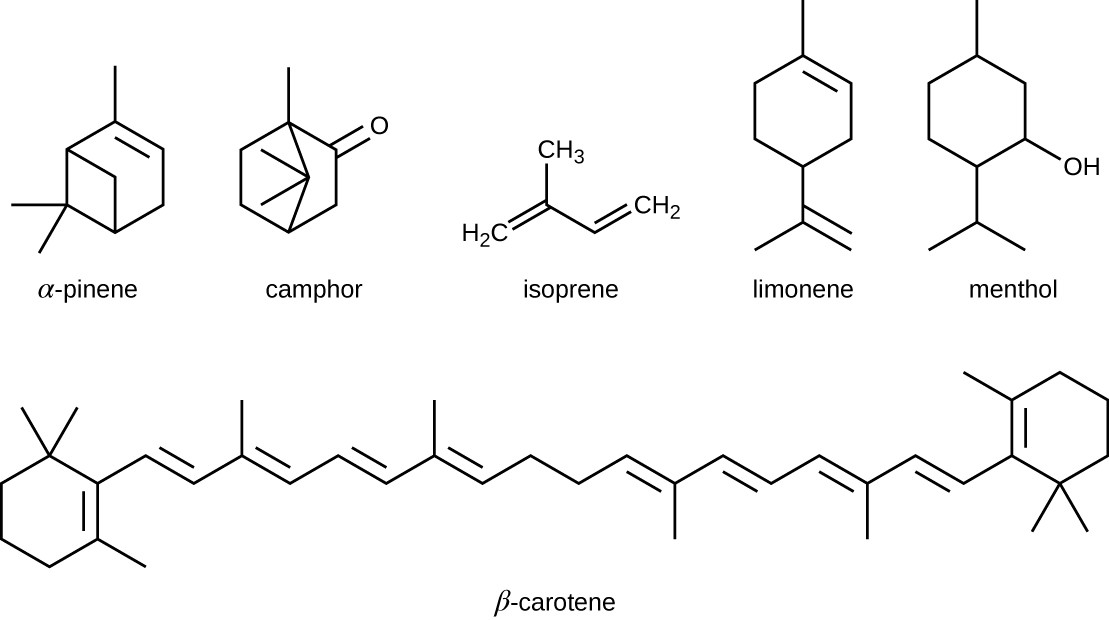 Another type of lipids are steroids, complex, ringed structures that are found in cell membranes; some function as hormones. The most common types of steroids are sterols, which are steroids containing an OH group. These are mainly hydrophobic molecules, but also have hydrophilic hydroxyl groups. The most common sterol found in animal tissues is cholesterol. Its structure consists of four rings with a double bond in one of the rings, and a hydroxyl group at the sterol-defining position. The function of cholesterol is to strengthen cell membranes in eukaryotes and in bacteria without cell walls, such as Mycoplasma. Prokaryotes generally do not produce cholesterol, although bacteria produce similar compounds called hopanoids, which are also multiringed structures that strengthen bacterial membranes (Figure 5). Fungi and some protozoa produce a similar compound called ergosterol, which strengthens the cell membranes of these organisms.

Figure 5. Cholesterol and hopene (a hopanoid compound) are molecules that reinforce the structure of the cell membranes in eukaryotes and prokaryotes, respectively.

This video provides additional information about phospholipids and liposomes:

This example continues Cristina’s story that started in Organic Molecules.

The moisturizing cream prescribed by Penny’s doctor was a topical corticosteroid cream containing hydrocortisone. Hydrocortisone is a synthetic form of cortisol, a corticosteroid hormone produced in the adrenal glands, from cholesterol. When applied directly to the skin, it can reduce inflammation and temporarily relieve minor skin irritations, itching, and rashes by reducing the secretion of histamine, a compound produced by cells of the immune system in response to the presence of pathogens or other foreign substances. Because histamine triggers the body’s inflammatory response, the ability of hydrocortisone to reduce the local production of histamine in the skin effectively suppresses the immune system and helps limit inflammation and accompanying symptoms such as pruritus (itching) and rashes.

Which of the following describes lipids?

Answer e. All of the options describe lipids.

Molecules bearing both polar and nonpolar groups are said to be which of the following?

Answer b. Molecules bearing both polar and nonpolar groups are amphipathic.

Lipids are a naturally occurring group of substances that are not soluble in water but are freely soluble in organic solvents.

Fatty acids having no double bonds are called "unsaturated."

A triglyceride is formed by joining three glycerol molecules to a fatty acid backbone in a dehydration reaction.

Waxes contain esters formed from long-chain __________ and saturated __________, and they may also contain substituted hydrocarbons.

Cholesterol is the most common member of the steroid group, found in animal tissues; it has a tetracyclic carbon ring system with a double bond in one of the rings and one free hydroxyl group.

is a part of the Gram-negative cell outer membrane