The first class of Proteobacteria is the Alphaproteobacteria. The unifying characteristic of this class is that they are oligotrophs, organisms capable of living in low-nutrient environments such as deep oceanic sediments, glacial ice, or deep undersurface soil.

Among the Alphaproteobacteria are two taxa, chlamydias and rickettsias, that are obligate intracellular pathogens, meaning that part of their life cycle must occur inside other cells called host cells. When not growing inside a host cell, Chlamydia and Rickettsia are metabolically inactive outside of the host cell. They cannot synthesize their own adenosine triphosphate (ATP), and, therefore, rely on cells for their energy needs.

Rickettsia spp. include a number of serious human pathogens. For example, R. rickettsii causes Rocky Mountain spotted fever, a life-threatening form of meningoencephalitis (inflammation of the membranes that wrap the brain). R. rickettsii infects ticks and can be transmitted to humans via a bite from an infected tick (Figure 1). 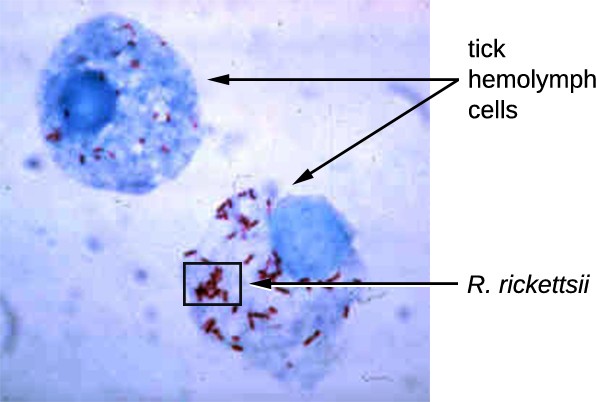 Figure 1. Rickettsias require special staining methods to see them under a microscope. Here, R. rickettsii, which causes Rocky Mountain spotted fever, is shown infecting the cells of a tick. (credit: modification of work by Centers for Disease Control and Prevention)

Chlamydia is another taxon of the Alphaproteobacteria. Members of this genus are extremely resistant to the cellular defenses, giving them the ability to spread from host to host rapidly via elementary bodies. The metabolically and reproductively inactive elementary bodies are the endospore-like form of intracellular bacteria that enter an epithelial cell, where they become active. Figure 2 illustrates the life cycle of Chlamydia. 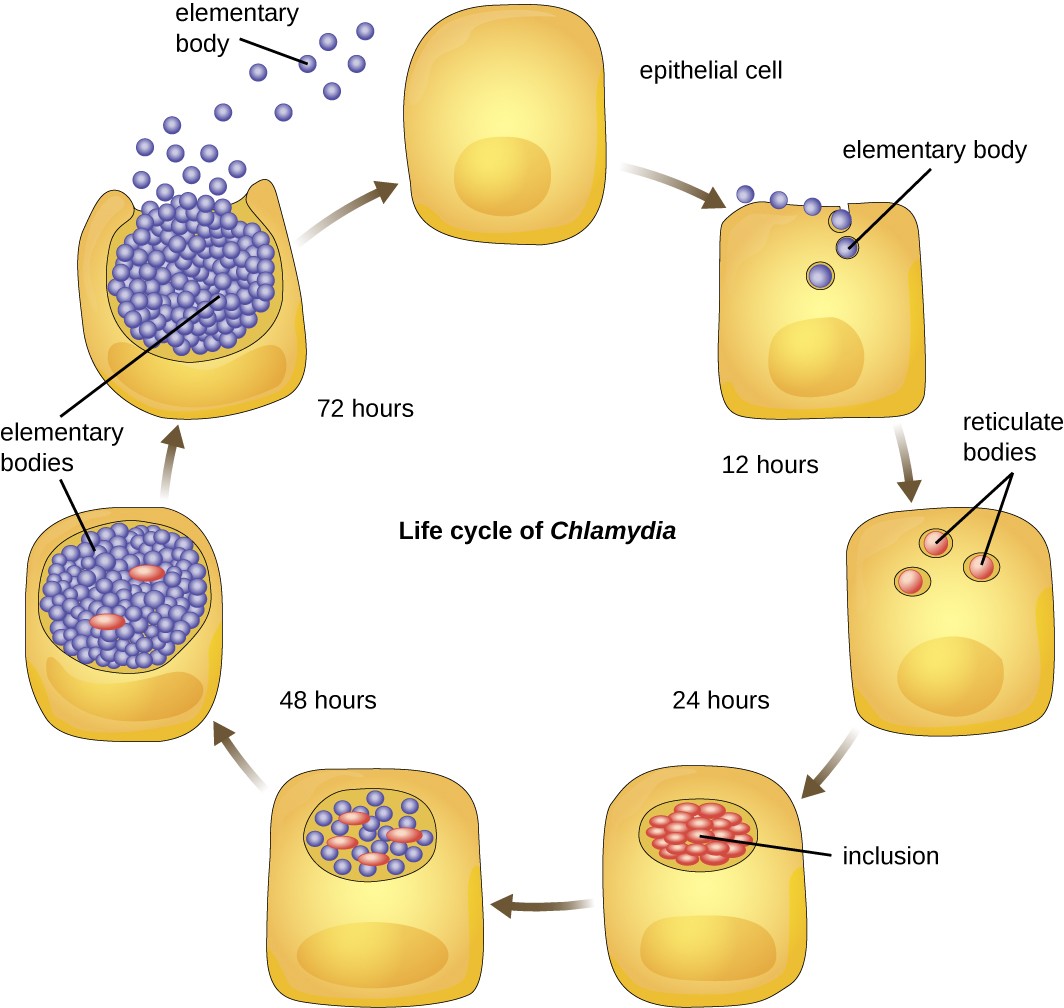 C. trachomatis is a human pathogen that causes trachoma, a disease of the eyes, often leading to blindness. C. trachomatis also causes the sexually transmitted disease lymphogranuloma venereum (LGV). This disease is often mildly symptomatic, manifesting as regional lymph node swelling, or it may be asymptomatic, but it is extremely contagious and is common on college campuses.

Table 1 summarizes the characteristics of important genera of Alphaproteobacteria.

Unlike Alphaproteobacteria, which survive on a minimal amount of nutrients, the class Betaproteobacteria are eutrophs (or copiotrophs), meaning that they require a copious amount of organic nutrients. Betaproteobacteria often grow between aerobic and anaerobic areas (e.g., in mammalian intestines). Some genera include species that are human pathogens, able to cause severe, sometimes life-threatening disease. The genus Neisseria, for example, includes the bacteria N. gonorrhoeae, the causative agent of the STI gonorrhea, and N. meningitides, the causative agent of bacterial meningitis. 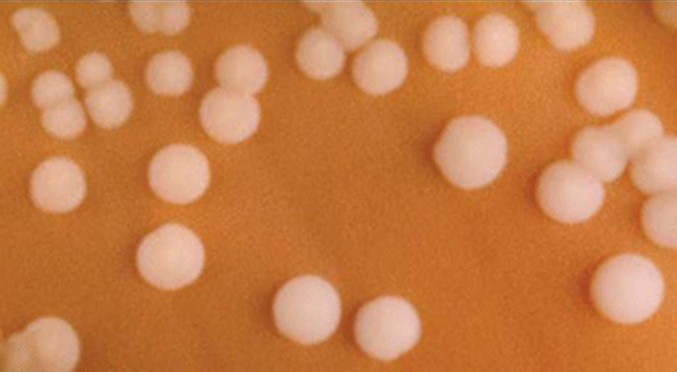 Neisseria are cocci that live on mucosal surfaces of the human body. They are fastidious, or difficult to culture, and they require high levels of moisture, nutrient supplements, and carbon dioxide. Also, Neisseria are microaerophilic, meaning that they require low levels of oxygen. For optimal growth and for the purposes of identification, Neisseria spp. are grown on chocolate agar (i.e., agar supplemented by partially hemolyzed red blood cells). Their characteristic pattern of growth in culture is diplococcal: pairs of cells resembling coffee beans (Figure 3).

The pathogen responsible for pertussis (whooping cough) is also a member of Betaproteobacteria. The bacterium Bordetella pertussis, from the order Burkholderiales, produces several toxins that paralyze the movement of cilia in the human respiratory tract and directly damage cells of the respiratory tract, causing a severe cough.

Table 2 summarizes the characteristics of important genera of Betaproteobacteria.

This example continues Sharnita’s story that started in Prokaryote Habitats, Relationships, and Microbiomes.

When Sharnita finally went to the doctor’s office, the physician listened to her breathing through a stethoscope. He heard some crepitation (a crackling sound) in her lungs, so he ordered a chest radiograph and asked the nurse to collect a sputum sample for microbiological evaluation and cytology. The radiologic evaluation found cavities, opacities, and a particular pattern of distribution of abnormal material (Figure 4). 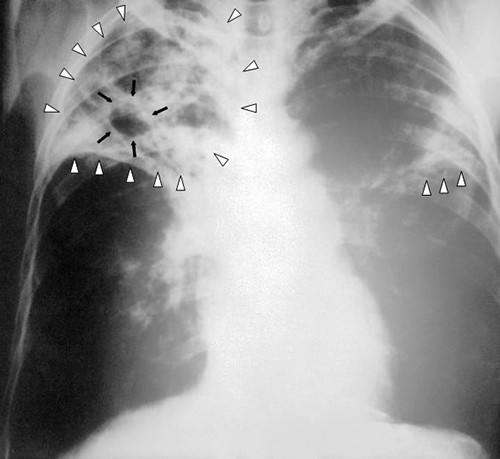 The most diverse class of gram-negative bacteria is Gammaproteobacteria, and it includes a number of human pathogens. For example, a large and diverse family, Pseudomonaceae, includes the genus Pseudomonas. Within this genus is the species P. aeruginosa, a pathogen responsible for diverse infections in various regions of the body. P. aeruginosa is a strictly aerobic, nonfermenting, highly motile bacterium. It often infects wounds and burns, can be the cause of chronic urinary tract infections, and can be an important cause of respiratory infections in patients with cystic fibrosis or patients on mechanical ventilators. Infections by P. aeruginosa are often difficult to treat because the bacterium is resistant to many antibiotics and has a remarkable ability to form biofilms. Other representatives of Pseudomonas include the fluorescent (glowing) bacterium P. fluorescens and the soil bacteria P. putida, which is known for its ability to degrade xenobiotics (substances not naturally produced or found in living organisms).

The Pasteurellaceae also includes several clinically relevant genera and species. This family includes several bacteria that are human and/or animal pathogens. For example, Pasteurella haemolytica causes severe pneumonia in sheep and goats. P. multocida is a species that can be transmitted from animals to humans through bites, causing infections of the skin and deeper tissues. The genus Haemophilus contains two human pathogens, H. influenzae and H. ducreyi. Despite its name, H. influenzae does not cause influenza (which is a viral disease). H. influenzae can cause both upper and lower respiratory tract infections, including sinusitis, bronchitis, ear infections, and pneumonia. Before the development of effective vaccination, strains of H. influenzae were a leading cause of more invasive diseases, like meningitis in children. H. ducreyi causes the STI known as chancroid.

The order Vibrionales includes the human pathogen Vibrio cholerae. This comma-shaped aquatic bacterium thrives in highly alkaline environments like shallow lagoons and sea ports. A toxin produced by V. cholerae causes hypersecretion of electrolytes and water in the large intestine, leading to profuse watery diarrhea and dehydration. V. parahaemolyticus is also a cause of gastrointestinal disease in humans, whereas V. vulnificus causes serious and potentially life-threatening cellulitis (infection of the skin and deeper tissues) and blood-borne infections. Another representative of Vibrionales, Aliivibrio fischeri, engages in a symbiotic relationship with squid. The squid provides nutrients for the bacteria to grow and the bacteria produce bioluminescence that protects the squid from predators (Figure 5).

The genus Legionella also belongs to the Gammaproteobacteria. L. pneumophila, the pathogen responsible for Legionnaires disease, is an aquatic bacterium that tends to inhabit pools of warm water, such as those found in the tanks of air conditioning units in large buildings (Figure 6). Because the bacteria can spread in aerosols, outbreaks of Legionnaires disease often affect residents of a building in which the water has become contaminated with Legionella. In fact, these bacteria derive their name from the first known outbreak of Legionnaires disease, which occurred in a hotel hosting an American Legion veterans’ association convention in Philadelphia in 1976.

Enterobacteriaceae is a large family of enteric (intestinal) bacteria belonging to the Gammaproteobacteria. They are facultative anaerobes and are able to ferment carbohydrates. Within this family, microbiologists recognize two distinct categories. The first category is called the coliforms, after its prototypical bacterium species, Escherichia coli. Coliforms are able to ferment lactose completely (i.e., with the production of acid and gas). The second category, noncoliforms, either cannot ferment lactose or can only ferment it incompletely (producing either acid or gas, but not both). The noncoliforms include some notable human pathogens, such as Salmonella spp., Shigella spp., and Yersinia pestis.

E. coli has been perhaps the most studied bacterium since it was first described in 1886 by Theodor Escherich (1857–1911). Many strains of E. coli are in mutualistic relationships with humans. However, some strains produce a potentially deadly toxin called Shiga toxin, which perforates cellular membranes in the large intestine, causing bloody diarrhea and peritonitis (inflammation of the inner linings of the abdominal cavity). Other E. coli strains may cause traveler’s diarrhea, a less severe but very widespread disease.

The genus Salmonella, which belongs to the noncoliform group of Enterobacteriaceae, is interesting in that there is still no consensus about how many species it includes. Scientists have reclassified many of the groups they once thought to be species as serotypes (also called serovars), which are strains or variations of the same species of bacteria. Their classification is based on patterns of reactivity by animal antisera against molecules on the surface of the bacterial cells. A number of serotypes of Salmonella can cause salmonellosis, characterized by inflammation of the small and the large intestine, accompanied by fever, vomiting, and diarrhea. The species S. enterobacterica (serovar typhi) causes typhoid fever, with symptoms including fever, abdominal pain, and skin rashes (Figure 7). 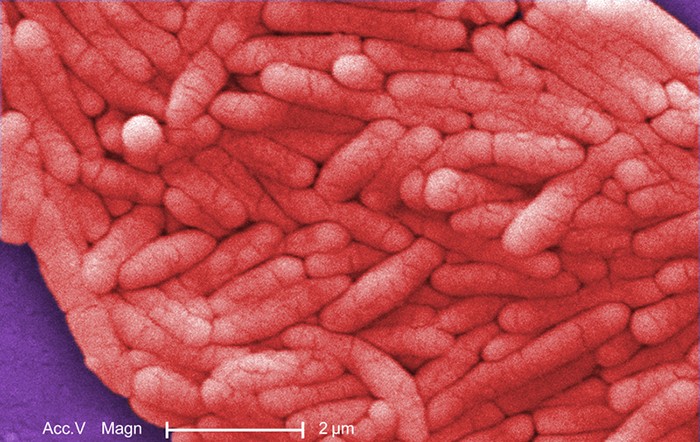 Table 3 summarizes the characteristics of important genera of Gammaproteobacteria.

The Deltaproteobacteria is a small class of gram-negative Proteobacteria that includes sulfate-reducing bacteria (SRBs), so named because they use sulfate as the final electron acceptor in the electron transport chain. Few SRBs are pathogenic. However, the SRB Desulfovibrio orale is associated with periodontal disease (disease of the gums). 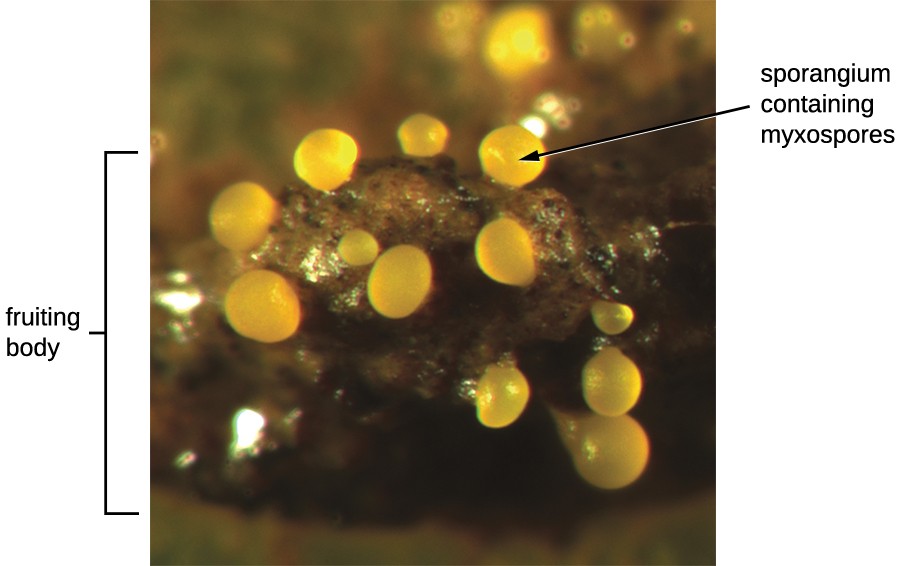 Deltaproteobacteria also includes the genus Bdellovibrio, species of which are parasites of other gram-negative bacteria. Bdellovibrio invades the cells of the host bacterium, positioning itself in the periplasm, the space between the plasma membrane and the cell wall, feeding on the host’s proteins and polysaccharides. The infection is lethal for the host cells.

Another type of Deltaproteobacteria, myxobacteria, lives in the soil, scavenging inorganic compounds. Motile and highly social, they interact with other bacteria within and outside their own group. They can form multicellular, macroscopic "fruiting bodies" (Figure 8), structures that are still being studied by biologists and bacterial ecologists.[5] These bacteria can also form metabolically inactive myxospores.

Table 4 summarizes the characteristics of several important genera of Deltaproteobacteria. 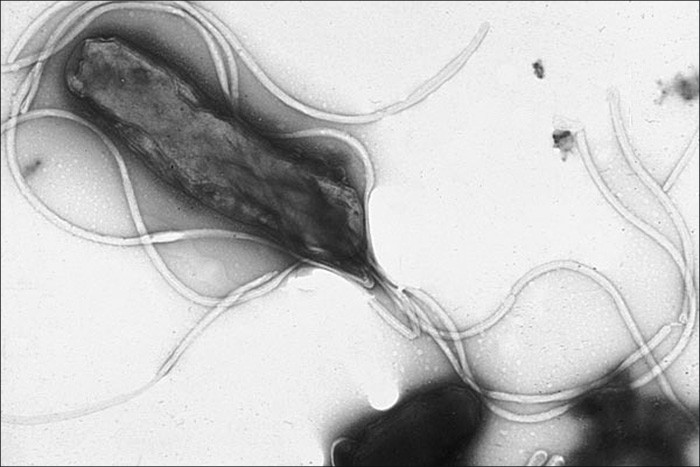 Figure 9. Helicobacter pylori can cause chronic gastritis, which can lead to ulcers and stomach cancer.

The smallest class of Proteobacteria is Epsilonproteobacteria, which are gram-negative microaerophilic bacteria (meaning they only require small amounts of oxygen in their environment). Two clinically relevant genera of Epsilonproteobacteria are Campylobacter and Helicobacter, both of which include human pathogens. Campylobacter can cause food poisoning that manifests as severe enteritis (inflammation in the small intestine). This condition, caused by the species C. jejuni, is rather common in developed countries, usually because of eating contaminated poultry products. Chickens often harbor C. jejuni in their gastrointestinal tract and feces, and their meat can become contaminated during processing.

Within the genus Helicobacter, the helical, flagellated bacterium H. pylori has been identified as a beneficial member of the stomach microbiota, but it is also the most common cause of chronic gastritis and ulcers of the stomach and duodenum (Figure 9). Studies have also shown that H. pylori is linked to stomach cancer.[6] H. pylori is somewhat unusual in its ability to survive in the highly acidic environment of the stomach. It produces urease and other enzymes that modify its environment to make it less acidic.

Table 5 summarizes the characteristics of the most clinically relevant genera of Epsilonproteobacteria.

Which of the following describes Proteobacteria in domain Bacteria?

Answer a. Proteobacteria is a phylum within domain Bacteria.

All Alphaproteobacteria are which of the following?

Answer a. All Alphaproteobacteria are oligotrophs.

Class Betaproteobacteria includes all but which of the following genera?

Answer d. Campylobacter is not in class Betaproteobacteria.

Haemophilus influenzae is a common cause of which of the following?

Answer c. Haemophilus influenzae is a common cause of upper respiratory tract infections.

The species ________, which belongs to Epsilonproteobacteria, causes peptic ulcers of the stomach and duodenum.

The species Helicobacter pylori, which belongs to Epsilonproteobacteria, causes peptic ulcers of the stomach and duodenum.

The genus Salmonella belongs to the class ________ and includes pathogens that cause salmonellosis and typhoid fever.

The genus Salmonella belongs to the class Gammaproteobacteria and includes pathogens that cause salmonellosis and typhoid fever. 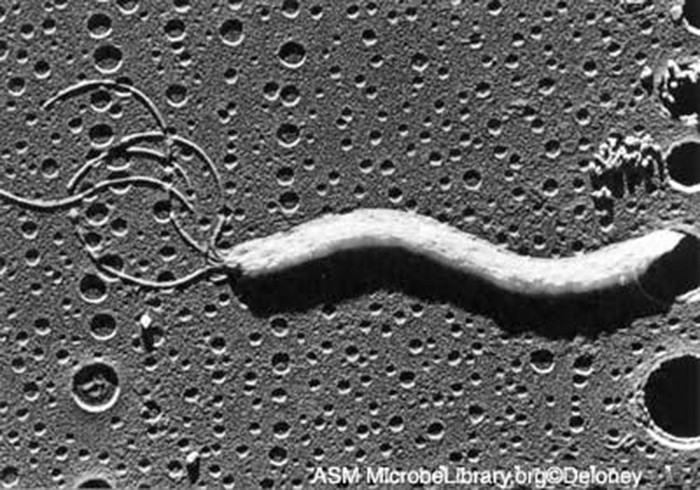 BIOL 0012 •  University of the West Indies at Mona