Protozoan and Helminthic Infections of the Skin and Eyes


Many parasitic protozoans and helminths use the skin or eyes as a portal of entry. Some may physically burrow into the skin or the mucosa of the eye; others breach the skin barrier by means of an insect bite. Still others take advantage of a wound to bypass the skin barrier and enter the body, much like other opportunistic pathogens. Although many parasites enter the body through the skin, in this chapter we will limit our discussion to those for which the skin or eyes are the primary site of infection. Parasites that enter through the skin but travel to a different site of infection will be covered in other chapters. In addition, we will limit our discussion to microscopic parasitic infections of the skin and eyes. Macroscopic parasites such as lice, scabies, mites, and ticks are beyond the scope of this text.

Acanthamoeba is a genus of free-living protozoan amoebae that are common in soils and unchlorinated bodies of fresh water. (This is one reason why some swimming pools are treated with chlorine.) The genus contains a few parasitic species, some of which can cause infections of the eyes, skin, and nervous system. Such infections can sometimes travel and affect other body systems. Skin infections may manifest as abscesses, ulcers, and nodules. When acanthamoebae infect the eye, causing inflammation of the cornea, the condition is called Acanthamoeba keratitis. Figure 1 illustrates the Acanthamoeba life cycle and various modes of infection. 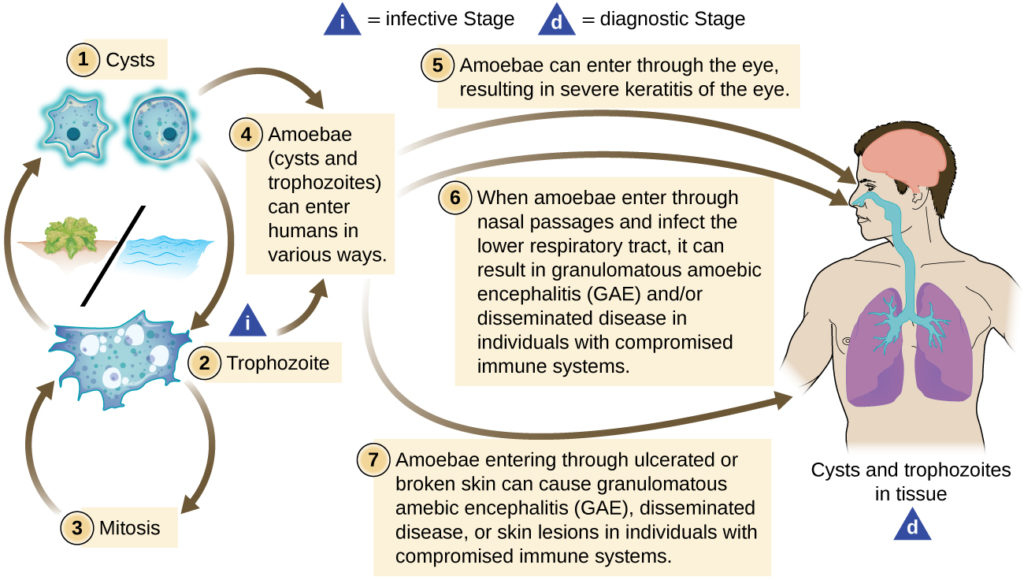 Figure 1. Acanthamoeba spp. are waterborne parasites very common in unchlorinated aqueous environments. As shown in this life cycle, Acanthamoeba cysts and trophozoites are both capable of entering the body through various routes, causing infections of the eye, skin, and central nervous system. (credit: modification of work by Centers for Disease Control and Prevention)

While Acanthamoeba keratitis is initially mild, it can lead to severe corneal damage, vision impairment, or even blindness if left untreated. Similar to eye infections involving P. aeruginosa, Acanthamoeba poses a much greater risk to wearers of contact lenses because the amoeba can thrive in the space between contact lenses and the cornea. Prevention through proper contact lens care is important. Lenses should always be properly disinfected prior to use, and should never be worn while swimming or using a hot tub.

Acanthamoeba can also enter the body through other pathways, including skin wounds and the respiratory tract. It usually does not cause disease except in immunocompromised individuals; however, in rare cases, the infection can spread to the nervous system, resulting in a usually fatal condition called granulomatous amoebic encephalitis (GAE) (see Fungal and Parasitic Diseases of the Nervous System). Disseminated infections, lesions, and Acanthamoeba keratitis can be diagnosed by observing symptoms and examining patient samples under the microscope to view the parasite. Skin biopsies may be used.

Acanthamoeba keratitis is difficult to treat, and prompt treatment is necessary to prevent the condition from progressing. The condition generally requires three to four weeks of intensive treatment to resolve. Common treatments include topical antiseptics (e.g., polyhexamethylene biguanide, chlorhexidine, or both), sometimes with painkillers or corticosteroids (although the latter are controversial because they suppress the immune system, which can worsen the infection). Azoles are sometimes prescribed as well. Advanced cases of keratitis may require a corneal transplant to prevent blindness.

Figure 2. (a) An Acanthamoeba cyst. (b) An Acanthamoeba trophozoite (c) The eye of a patient with Acanthamoeba keratitis. The fluorescent color, which is due to sodium fluorescein application, highlights significant damage to the cornea and vascularization of the surrounding conjunctiva. (credit a: modification of work by Centers for Disease Control and Prevention; credit b, c: modification of work by Jacob Lorenzo-Morales, Naveed A Kahn and Julia Walochnik)

The helminth Loa loa, also known as the African eye worm, is a nematode that can cause loiasis, a disease endemic to West and Central Africa (Figure 3). The disease does not occur outside that region except when carried by travelers. There is evidence that individual genetic differences affect susceptibility to developing loiasis after infection by the Loa loa worm. Even in areas in which Loa loa worms are common, the disease is generally found in less than 30% of the population.[3] It has been suggested that travelers who spend time in the region may be somewhat more susceptible to developing symptoms than the native population, and the presentation of infection may differ.[4]

The parasite is spread by deerflies (genus Chrysops), which can ingest the larvae from an infected human via a blood meal (Figure 3). When the deerfly bites other humans, it deposits the larvae into their bloodstreams. After about five months in the human body, some larvae develop into adult worms, which can grow to several centimeters in length and live for years in the subcutaneous tissue of the host.

The name "eye worm" alludes to the visible migration of worms across the conjunctiva of the eye. Adult worms live in the subcutaneous tissues and can travel at about 1 cm per hour. They can often be observed when migrating through the eye, and sometimes under the skin; in fact, this is generally how the disease is diagnosed. It is also possible to test for antibodies, but the presence of antibodies does not necessarily indicate a current infection; it only means that the individual was exposed at some time. Some patients are asymptomatic, but in others the migrating worms can cause fever and areas of allergic inflammation known as Calabar swellings. Worms migrating through the conjunctiva can cause temporary eye pain and itching, but generally there is no lasting damage to the eye. Some patients experience a range of other symptoms, such as widespread itching, hives, and joint and muscle pain.

Worms can be surgically removed from the eye or the skin, but this treatment only relieves discomfort; it does not cure the infection, which involves many worms. The preferred treatment is diethylcarbamazine, but this medication produces severe side effects in some individuals, such as brain inflammation and possible death in patients with heavy infections. Albendazole is also sometimes used if diethylcarbamazine is not appropriate or not successful. If left untreated for many years, loiasis can damage the kidneys, heart, and lungs, though these symptoms are rare. 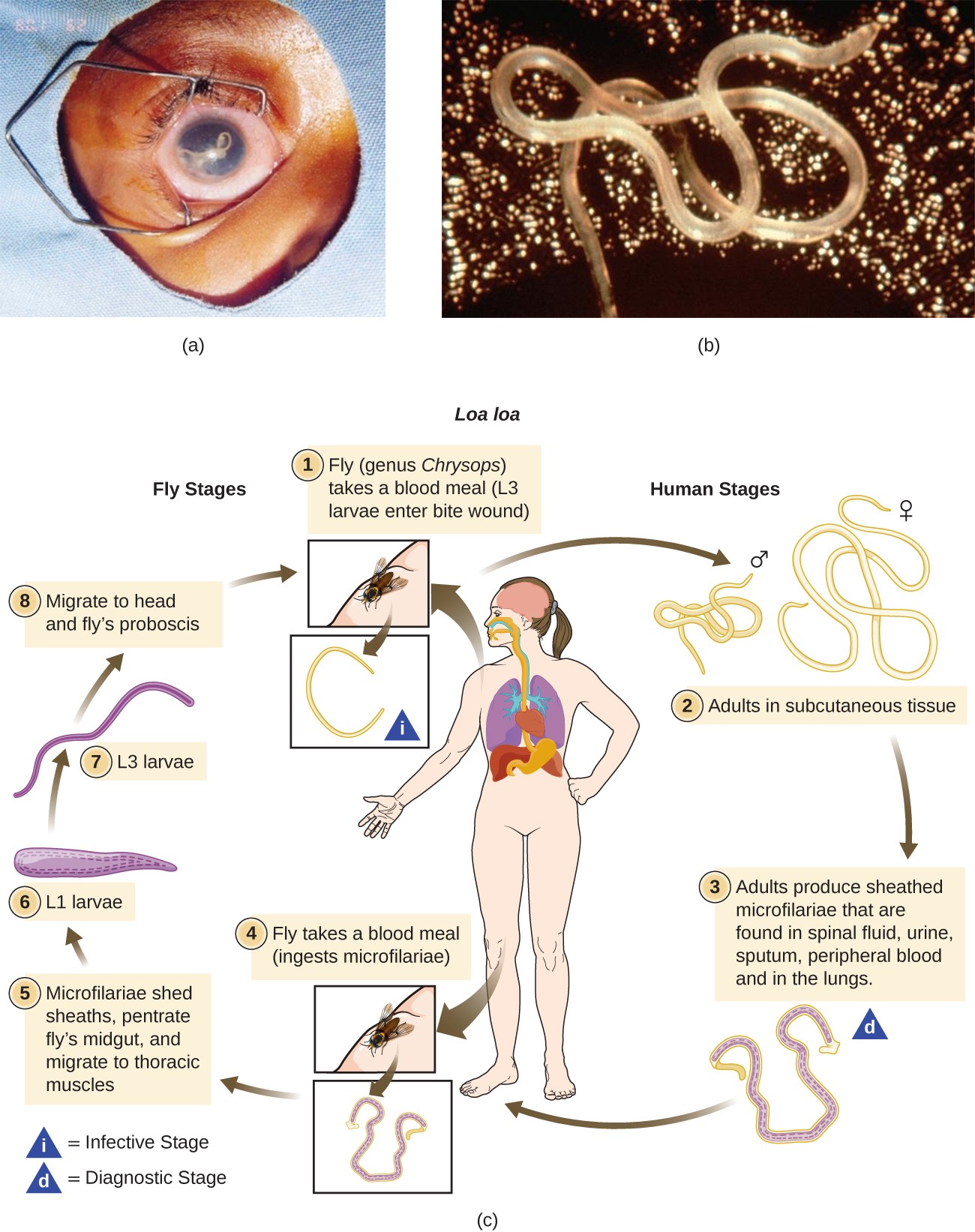 See a video of a live Loa loa microfilaria under the microscope.

Which of the following is most likely to cause an Acanthamoeba infection?

Answer a. Swimming in a lake while wearing contact lenses is likely to cause an Acanthamoeba infection.

Answer c. The parasitic Loa loa worm can cause great pain when it travels through the conjunctiva.

A patient tests positive for Loa loa antibodies. What does this test indicate?

Answer a. The individual was exposed to Loa loa at some point.

___________ is commonly treated with a combination of chlorhexidine and polyhexamethylene biguanide.

Answer a. Acanthamoeba keratitis is commonly treated with a combination of chlorhexidine and polyhexamethylene biguanide.

Eye worm is another name for loiasis.

The cornea is the part of the eye that is damaged due to Acanthamoeba keratitis.