Research attempts to discover the causative agents of previously uninvestigated diseases have led to the discovery of nonliving disease agents quite different from viruses. These include particles consisting only of RNA or only of protein that, nonetheless, are able to self-propagate at the expense of a host—a key similarity to viruses that allows them to cause disease conditions. To date, these discoveries include viroids, virusoids, and the proteinaceous prions. 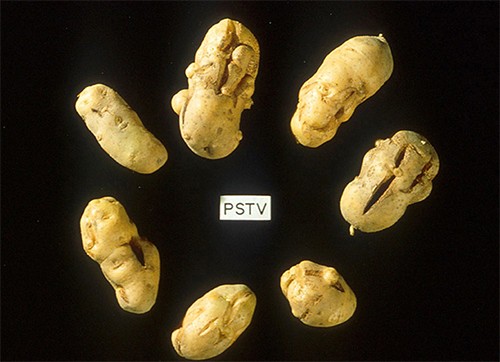 Figure 1. These potatoes have been infected by the potato spindle tuber viroid (PSTV), which is typically spread when infected knives are used to cut healthy potatoes, which are then planted. (credit: Pamela Roberts, University of Florida Institute of Food and Agricultural Sciences, USDA ARS)

In 1971, Theodor Diener, a pathologist working at the Agriculture Research Service, discovered an acellular particle that he named a viroid, meaning "virus-like." Viroids consist only of a short strand of circular RNA capable of self-replication. The first viroid discovered was found to cause potato tuber spindle disease, which causes slower sprouting and various deformities in potato plants (see Figure 1). Like viruses, potato spindle tuber viroids (PSTVs) take control of the host machinery to replicate their RNA genome. Unlike viruses, viroids do not have a protein coat to protect their genetic information.

Viroids can result in devastating losses of commercially important agricultural food crops grown in fields and orchards. Since the discovery of PSTV, other viroids have been discovered that cause diseases in plants. Tomato planta macho viroid (TPMVd) infects tomato plants, which causes loss of chlorophyll, disfigured and brittle leaves, and very small tomatoes, resulting in loss of productivity in this field crop. Avocado sunblotch viroid (ASBVd) results in lower yields and poorer-quality fruit. ASBVd is the smallest viroid discovered thus far that infects plants. Peach latent mosaic viroid (PLMVd) can cause necrosis of flower buds and branches, and wounding of ripened fruit, which leads to fungal and bacterial growth in the fruit. PLMVd can also cause similar pathological changes in plums, nectarines, apricots, and cherries, resulting in decreased productivity in these orchards, as well. Viroids, in general, can be dispersed mechanically during crop maintenance or harvesting, vegetative reproduction, and possibly via seeds and insects, resulting in a severe drop in food availability and devastating economic consequences.

A second type of pathogenic RNA that can infect commercially important agricultural crops are the virusoids, which are subviral particles best described as non–self-replicating ssRNAs. RNA replication of virusoids is similar to that of viroids but, unlike viroids, virusoids require that the cell also be infected with a specific "helper" virus. There are currently only five described types of virusoids and their associated helper viruses. The helper viruses are all from the family of Sobemoviruses. An example of a helper virus is the subterranean clover mottle virus, which has an associated virusoid packaged inside the viral capsid. Once the helper virus enters the host cell, the virusoids are released and can be found free in plant cell cytoplasm, where they possess ribozyme activity. The helper virus undergoes typical viral replication independent of the activity of the virusoid. The virusoid genomes are small, only 220 to 388 nucleotides long. A virusoid genome does not code for any proteins, but instead serves only to replicate virusoid RNA.

Virusoids belong to a larger group of infectious agents called satellite RNAs, which are similar pathogenic RNAs found in animals. Unlike the plant virusoids, satellite RNAs may encode for proteins; however, like plant virusoids, satellite RNAs must coinfect with a helper virus to replicate. One satellite RNA that infects humans and that has been described by some scientists as a virusoid is the hepatitis delta virus (HDV), which, by some reports, is also called hepatitis delta virusoid. Much larger than a plant virusoid, HDV has a circular, ssRNA genome of 1,700 nucleotides and can direct the biosynthesis of HDV-associated proteins. The HDV helper virus is the hepatitis B virus (HBV). Coinfection with HBV and HDV results in more severe pathological changes in the liver during infection, which is how HDV was first discovered.

At one time, scientists believed that any infectious particle must contain DNA or RNA. Then, in 1982, Stanley Prusiner, a medical doctor studying scrapie (a fatal, degenerative disease in sheep) discovered that the disease was caused by proteinaceous infectious particles, or prions. Because proteins are acellular and do not contain DNA or RNA, Prusiner’s findings were originally met with resistance and skepticism; however, his research was eventually validated, and he received the Nobel Prize in Physiology or Medicine in 1997.

A prion is a misfolded rogue form of a normal protein (PrPc) found in the cell. This rogue prion protein (PrPsc), which may be caused by a genetic mutation or occur spontaneously, can be infectious, stimulating other endogenous normal proteins to become misfolded, forming plaques (see Figure 2). Today, prions are known to cause various forms of transmissible spongiform encephalopathy (TSE) in human and animals.

Figure 2. Endogenous normal prion protein (PrPc) is converted into the disease-causing form (PrPsc) when it encounters this variant form of the protein. PrPsc may arise spontaneously in brain tissue, especially if a mutant form of the protein is present, or it may originate from misfolded prions consumed in food that eventually find their way into brain tissue. (credit b: modification of work by USDA)

TSE is a rare degenerative disorder that affects the brain and nervous system. The accumulation of rogue proteins causes the brain tissue to become sponge-like, killing brain cells and forming holes in the tissue, leading to brain damage, loss of motor coordination, and dementia (see Figure 3). Infected individuals are mentally impaired and become unable to move or speak. There is no cure, and the disease progresses rapidly, eventually leading to death within a few months or years.

TSEs in humans include kuru, fatal familial insomnia, Gerstmann-Straussler-Scheinker disease, and Creutzfeldt-Jakob disease (see Figure 3). TSEs in animals include mad cow disease, scrapie (in sheep and goats), and chronic wasting disease (in elk and deer). TSEs can be transmitted between animals and from animals to humans by eating contaminated meat or animal feed. Transmission between humans can occur through heredity (as is often the case with GSS and CJD) or by contact with contaminated tissue, as might occur during a blood transfusion or organ transplant. There is no evidence for transmission via casual contact with an infected person. Table 1 lists TSEs that affect humans and their modes of transmission.

Prions are extremely difficult to destroy because they are resistant to heat, chemicals, and radiation. Even standard sterilization procedures do not ensure the destruction of these particles. Currently, there is no treatment or cure for TSE disease, and contaminated meats or infected animals must be handled according to federal guidelines to prevent transmission.

This example concludes Joaquim’s story that started earlier on Viruses and Isolation, Culture, and Identification of Viruses.

A few days later, Joaquim’s doctor receives the results of the immunofluorescence test on his skin sample. The test is negative for rabies antigen. A second viral antigen test on his saliva sample also comes back negative. Despite these results, the doctor decides to continue Joaquim’s current course of treatment. Given the positive RT-PCR test, it is best not to rule out a possible rabies infection.

Near the site of the bite, Joaquim receives an injection of rabies immunoglobulin, which attaches to and inactivates any rabies virus that may be present in his tissues. Over the next 14 days, he receives a series of four rabies-specific vaccinations in the arm. These vaccines activate Joaquim’s immune response and help his body recognize and fight the virus. Thankfully, with treatment, Joaquim symptoms improve and he makes a full recovery.

Not all rabies cases have such a fortunate outcome. In fact, rabies is usually fatal once the patient starts to exhibit symptoms, and postbite treatments are mainly palliative (i.e., sedation and pain management).

Which of these infectious agents do not have nucleic acid?

Answer d. Prions do not have nucleic acid.

Which of the following is true of prions?

Answer c. Prions are a rogue form of protein, PrP.

Both viroids and virusoids have an RNA genome, but virusoids require a helper virus to reproduce.

Bio 321: 1-1 The Science and History of Microbiology

BIOTECHNOL 2 •  Univ of the Fraser Valley

CAMS 301 •  Lyceum of the Philippines Univ