To study an aria, you simply have to know the larger story of which it is a part. Our aria, "La donna e mobile," is heard in the beginning of act 3.

Scene 1: A room in the palace 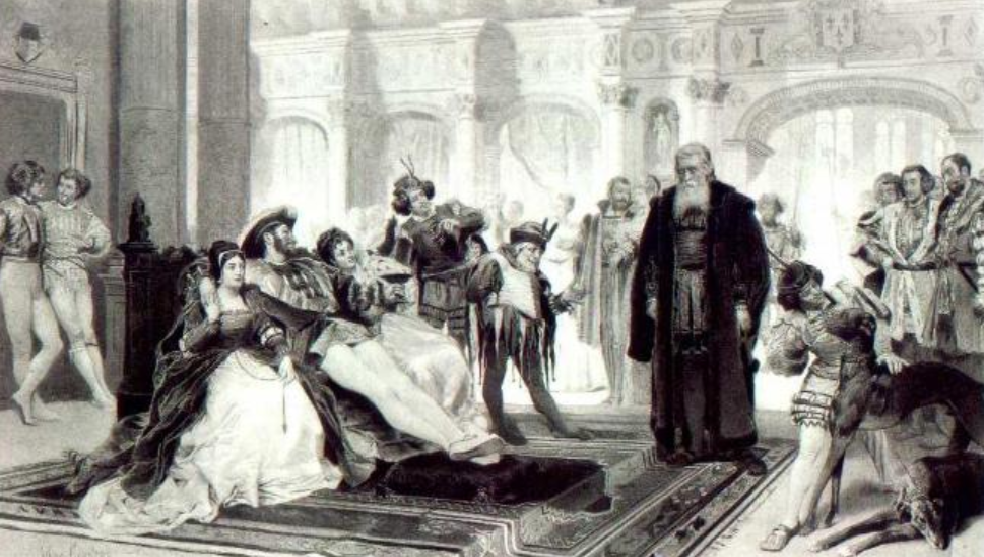 At a ball in his palace, the Duke sings of a life of pleasure with as many women as possible: "Questa o quella" ("This woman or that"). He has seen an unknown beauty in church and desires to possess her, but he also wishes to seduce the Countess of Ceprano. Rigoletto, the Duke's hunchbacked court jester, mocks the husbands of the ladies to whom the Duke is paying attention, and advises the Duke to get rid of them by prison or death. Marullo, one of the guests at the ball, informs the noblemen that Rigoletto has a "lover", and the noblemen cannot believe it. The noblemen resolve to take vengeance on Rigoletto. Subsequently Rigoletto mocks Count Monterone, whose daughter the Duke had seduced. Count Monterone is arrested at the Duke's order and curses the Duke and Rigoletto. The curse genuinely terrifies Rigoletto.

Scene 2: A street, with the courtyard of Rigoletto's house 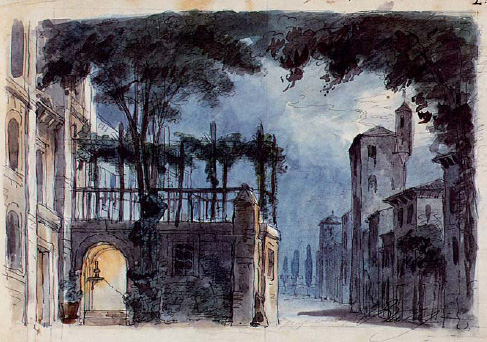 Act 1, Scene 2 stage set by Giuseppe Bertoja for the world premiere of Rigoletto

Thinking of the curse, Rigoletto approaches his house and is accosted by the assassin Sparafucile, who walks up to him and offers his services. Rigoletto considers the proposition but finally declines; Sparafucile wanders off, after repeating his own name a few times. Rigoletto contemplates the similarities between the two of them: "Pari siamo!" ("We are alike!"); Sparafucile kills men with his sword, and Rigoletto uses "a tongue of malice" to stab his victims. Rigoletto opens a door in the wall and returns home to his daughter Gilda. They greet each other warmly: "Figlia!" "Mio padre!" ("Daughter!" "My father!"). Rigoletto has been concealing his daughter from the Duke and the rest of the city, and she does not know her father's occupation. Since he has forbidden her to appear in public, she has been nowhere except to church and does not even know her own father's name.

When Rigoletto has gone, the Duke appears and overhears Gilda confess to her nurse Giovanna that she feels guilty for not having told her father about a young man she had met at the church. She says that she fell in love with him, but that she would love him even more if he were a student and poor. As she declares her love, the Duke enters, overjoyed. Gilda, alarmed, calls for Giovanna, unaware that the Duke had sent her away. Pretending to be a student, the Duke convinces Gilda of his love: "È il sol dell'anima" ("Love is the sunshine of the soul"). When she asks for his name, he hesitantly calls himself Gualtier Maldè. Hearing sounds and fearing that her father has returned, Gilda sends the Duke away after they quickly trade vows of love: "Addio, addio" ("Farewell, farewell"). Alone, Gilda meditates on her love for the Duke, whom she believes is a student: "Gualtier Maldè!... Caro nome" ("Dearest name").

Later, a preoccupied Rigoletto returns: "Riedo!... perché?" ("I've returned!... why?"), while the hostile noblemen outside the walled garden (believing Gilda to be the jester's mistress, unaware she is his daughter) get ready to abduct the helpless girl. Convincing Rigoletto that they are actually abducting the Countess Ceprano, they blindfold him and use him to help with the abduction: "Zitti, zitti" ("Softly, softly"). With her father's unknowing assistance Gilda is carried away by the noblemen. Upon realizing that it was in fact Gilda who was carried away, Rigoletto collapses, remembering the curse.

The Duke is concerned that Gilda has disappeared: "Ella mi fu rapita!" ("She was stolen from me!") and "Parmi veder le lagrime" ("I seem to see tears"). The noblemen then enter and inform him that they have captured Rigoletto's mistress. By their description, he recognizes it to be Gilda and rushes off to the room where she is held: "Possente amor mi chiama" ("Mighty love beckons me"). Pleased by the Duke's strange excitement, the courtiers now make sport with Rigoletto, who enters singing. He tries to find Gilda by pretending to be uncaring, as he fears she may fall into the hands of the Duke. Finally, he admits that he is in fact seeking his daughter and asks the courtiers to return her to him: "Cortigiani, vil razza dannata" ("Accursed race of courtiers"). Rigoletto attempts to run into the room in which Gilda is being held, but the noblemen beat him. Gilda rushes in and begs her father to send the people away. The men leave the room, believing Rigoletto has gone mad. Gilda describes to her father what has happened to her in the palace: "Tutte le feste al tempio" ("On all the blessed days"). In a duet Rigoletto demands vengeance against the Duke, while Gilda pleads for her lover: "Sì! Vendetta, tremenda vendetta!" ("Yes! Revenge, terrible revenge!").

A street outside Sparafucile's house


A portion of Sparafucile's house is seen, with two rooms open to the view of the audience. Rigoletto and Gilda, who still loves the Duke, arrive outside. The Duke's voice can be heard singing "La donna è mobile" ("Woman is fickle"), laying out the infidelity and fickle nature of women. Rigoletto makes Gilda realize that it is the Duke who is in the assassin's house attempting to seduce Sparafucile's sister, Maddalena: "Bella figlia dell’amore" ("Beautiful daughter of love").

Rigoletto bargains with the assassin, who is ready to murder his guest for money, and offers him 20 scudi to kill the Duke. He orders his daughter to put on a man's clothes to prepare to leave for Verona and states that he plans to follow later. With falling darkness, a thunderstorm approaches and the Duke determines to remain in the house. Sparafucile assigns to him the ground floor sleeping quarters.

Gilda, who still loves the Duke despite knowing him to be unfaithful, returns dressed as a man. She overhears Maddalena begging for the Duke's life, and Sparafucile promises her that if by midnight another can be found in place of the Duke, he will spare the Duke's life. Gilda resolves to sacrifice herself for the Duke and enters the house. She is immediately mortally wounded and collapses.

At midnight, when Rigoletto arrives with money, he receives a corpse wrapped in a sack, and rejoices in his triumph. Weighting it with stones, he is about to cast the sack into the river when he hears the voice of the Duke singing a reprise of his "La donna è mobile" aria. Bewildered, Rigoletto opens the sack and, to his despair, discovers his mortally wounded daughter. For a moment, she revives and declares she is glad to die for her beloved: "V'ho ingannato" ("Father, I deceived you"). She dies in his arms. Rigoletto's wildest fear materializes when he cries out in horror: "La maledizione!" ("The curse!")