For the most part, music for worship was written down, and music outside of worship was not. It is assumed that most secular music in the early Middle Ages was improvised. However, as the era progressed, a tradition of courtly music developed.

Kings and nobles wanted entertainment, certainly, but many also wanted their courts to be known as places of culture. This led to the composition of poetry and songs that was performed in many cases by members of the court themselves rather than by itinerant minstrels. These educated musicians had different names depending on the region in which they lived and worked, but the name we most commonly associate with them is troubadour.

A troubadour was a composer and performer of Old Occitan lyric poetry during the High Middle Ages (1100–1350). Since the word troubadour is etymologically masculine, a female troubadour is usually called a trobairitz.

The troubadour school or tradition began in the late eleventh century in Occitania, but it subsequently spread into Italy and Spain. Under the influence of the troubadours, related movements sprang up throughout Europe: the Minnesang in Germany, trovadorismo in Galicia and Portugal, and that of thetrouvères in northern France. Dante Alighieri in his De vulgari eloquentia defined the troubadour lyric as fictio rethorica musicaque poita: rhetorical, musical, and poetical fiction. After the "classical" period around the turn of the thirteenth century and a mid-century resurgence, the art of the troubadours declined in the fourteenth century and eventually died out around the time of the Black Death (1348).

The texts of troubadour songs deal mainly with themes of chivalry and courtly love. Most were metaphysical, intellectual, and formulaic. Many were humorous or vulgar satires. There were many genres, the most popular being the canso, but sirventes and tensos were especially popular in the post-classical period, in Italy and among the female troubadours, the trobairitz.

The 450 or so troubadours known to historians came from a variety of backgrounds. They made their living in a variety of ways, lived and travelled in many different places, and were actors in many types of social context. The troubadours were not wandering entertainers. Typically, they stayed in one place for a lengthy period of time under the patronage of a wealthy nobleman or woman. Many did travel extensively, however, sojourning at one court and then another.

The earliest troubadour, the Duke of Aquitaine, came from the high nobility. He was followed immediately by two poets of unknown origins, known only by their sobriquets, Cercamon and Marcabru, and by a member of the princely class, Jaufre Rudel. Many troubadours are described in their vidas as poor knights. It was one of the most common descriptors of status. Later troubadours especially could belong to lower classes, ranging from the middle class of merchants and "burgers" (persons of urban standing) to tradesmen and others who worked with their hands. Many troubadours also possessed a clerical education. For some this was their springboard to composition, since their clerical education equipped them with an understanding of musical and poetic forms as well as vocal training.

The Occitan words trobador and trobaire are relatively rare compared with the verb trobar (compose, invent), which was usually applied to the writing of poetry. It signified that a poem was original to an author (trobador) and was not merely sung or played by one. The term was used mostly for poetry only and in more careful works, like the vidas, is not generally applied to the composition of music or to singing, though the troubadour's poetry itself is not so careful. Sometime in the middle of the twelfth century, however, a distinction was definitely being made between an inventor of original verse and the performers of others'. These last were called joglars, from the Latin ioculatores, giving rise also to the French jongleur, Castilian juglar, and English juggler, which has come to refer to a more specific breed of performer. The medieval jongleur/joglar is really a minstrel. It is clear, for example from the poetry of Bertran de Born, that jongleurs were performers who did not usually compose.They often performed the troubadour's songs: singing, playing instruments, dancing, and even doing acrobatics.

The trobairitz were the female troubadours, the first female composers of secular music in the Western tradition. The word trobairitz was first used in the thirteenth-century Romance of Flamenca and its derivation is the same as that of trobaire but in feminine form. There were also female counterparts to the joglars: the joglaresas. The number of trobairitz varies between sources: there were twenty or twenty-one named trobairitz, plus an additional poetess known only as Domna H. There are several anonymous texts ascribed to women. Out of a total of about 450 troubadours and 2,500 troubadour works, the trobairitz and their corpus form a minor but interesting and informative portion. They are, therefore, quite well studied. 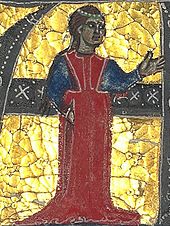 The trobairitz were in most respects as varied a lot as their male counterparts, with the general exceptions of their poetic style and their provenance. None of the trobairitz were prolific, or if they were their work has not survived. Only two have left us more than one piece: the Comtessa de Dia, with four, and Castelloza, with three or four. One of the known trobairitz, Gaudairença, wrote a song entitled Coblas e dansas, which has not survived; no other piece of hers has either.

The middle ages had sacred and secular music.pdf

The influence of folk music on Hungarian music life.ppt

Secular music and the middle ages