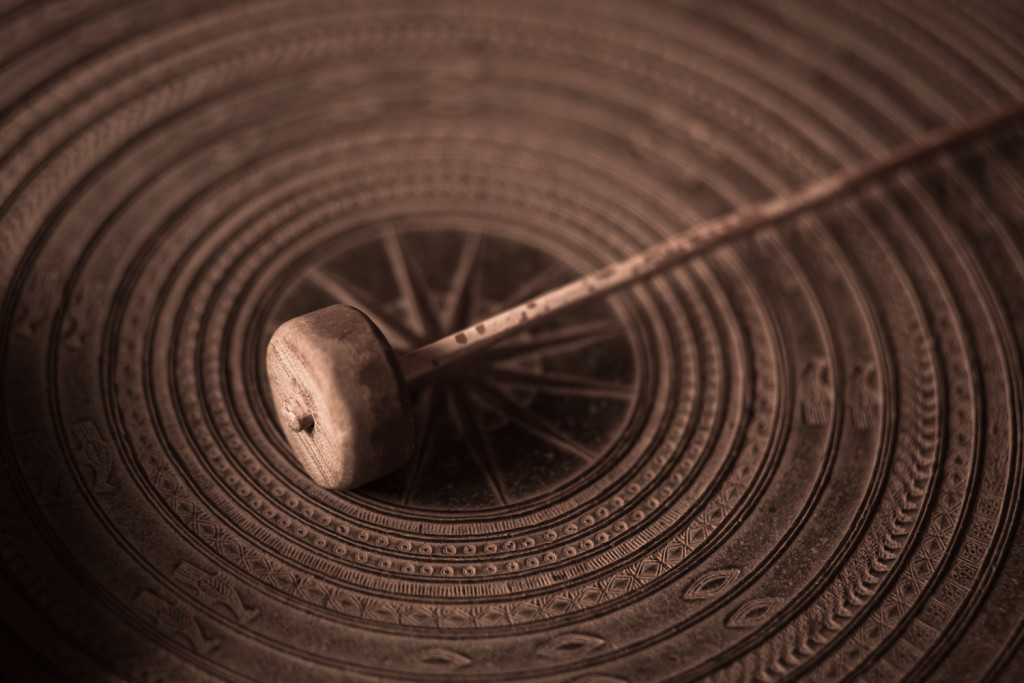 By far the most familiar suspended gong to most Westerners is the chau gong or bullseye gong. Large chau gongs, called tam-tams (not to be confused with tom-tom drums) have become part of the symphony orchestra. Sometimes a chau gong is referred to as a Chinese gong, but in fact it is only one of many types of suspended gongs that are associated with China. 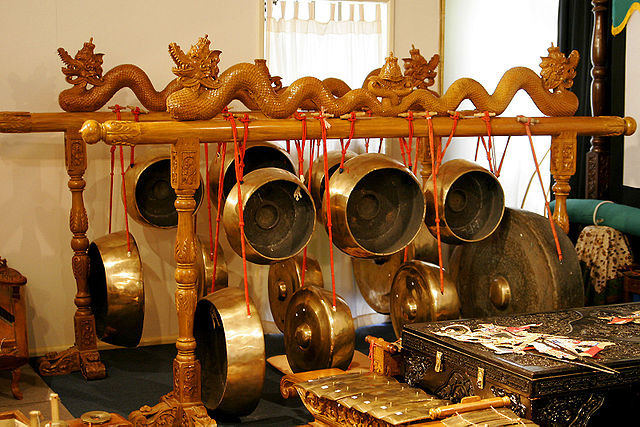 The chau gong is made of copper-based alloy, bronze or brass. It is almost flat except for the rim, which is turned up to make a shallow cylinder. On a 10" gong, for example, the rim extends about a half an inch perpendicular to the gong surface. The main surface is slightly concave when viewed from the direction to which the rim is turned. The centre spot and the rim of a chau gong are left coated on both sides with the black copper oxide that forms during the manufacture of the gong, the rest of the gong is polished to remove this coating. Chau gongs range in size from 7" to 80" in diameter.

In the following video you will see large gongs used to lead meditation.

The tambourine consists of a frame, often of wood or plastic, with pairs of small metal jingles, called "zils". Classically the term tambourine denotes an instrument with a drumhead, though some variants may not have a head at all. Tambourines are often used with regular percussion sets. They can be mounted, but position is largely down to preference. 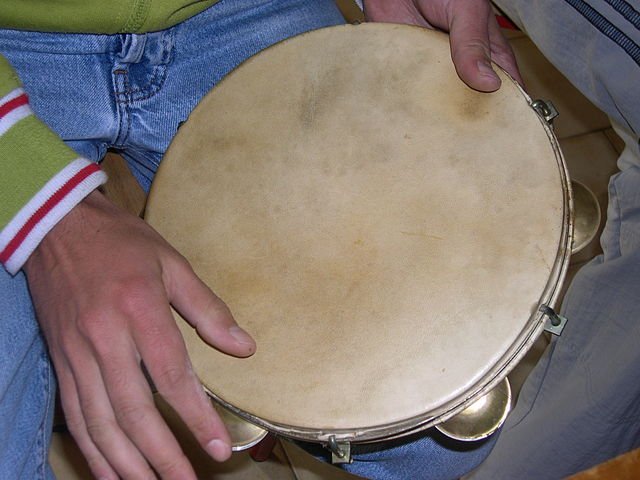 Tambourines come in many shapes with the most common being circular. It is found in many forms of music: Turkish folk music, Greek folk music, Italian folk music, classical music, Persian music, gospel music, pop music and rock music.

In the following video, Christopher Deane displays improvisational techniques with a tambourine.

The triangle is an idiophone type of musical instrument in the percussion family. It is a bar of metal, usually steel but sometimes other metals like beryllium copper, bent into a triangle shape. The instrument is usually held by a loop of some form of thread or wire at the top curve. It was first made around the 16th century. 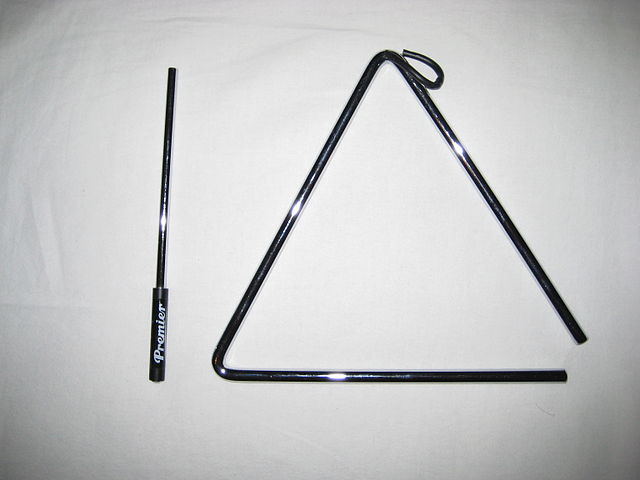 On a triangle instrument, one of the angles is left open, with the ends of the bar not quite touching. This causes the instrument to be of indeterminate or not settled or decided pitch. It is either suspended from one of the other corners by a piece of, most commonly, fishing line, leaving it free to vibrate, or hooked over the hand. It is usually struck with a metal beater, giving a high-pitched, ringing tone.

In the following video, the triangle plays a dominant role in the piece played by the Santa Monica Symphony Orchestra.

A glockenspiel  is composed of a set of tuned keys arranged in the fashion of the keyboard of a piano. In this way, it is similar to the xylophone; however, the xylophone's bars are made of wood, while the glockenspiel's are metal plates or tubes, thus making it a metallophone. The glockenspiel, moreover, is usually smaller and higher in pitch. 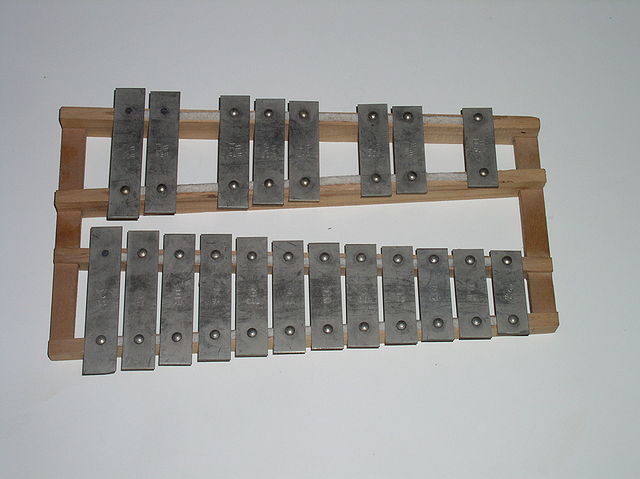 Glockenspiels are quite popular and appear in almost all genres of music ranging from hip-hop to jazz. Percussionist Neil Peart of the rock band Rush uses the glockenspiel in several of the band's arrangements, most notably in the commercial hit songs "The Spirit of Radio" and "Closer to the Heart", and also in album tracks "Xanadu" and "Circumstances." A keyboard-operated glockenspiel, as played by Danny Federici on such hit songs as "Born to Run" and "Hungry Heart," is considered part of Bruce Springsteen and the E Street Band's signature style.

In the following video, Vincenzo Raddato plays an excerpt from Mozart's Magic Flute.

The xylophone is a musical instrument in the percussion family that consists of wooden bars struck by mallets. Each bar is an idiophone tuned to a pitch of a musical scale, whether pentatonic or heptatonic in the case of many African and Asian instruments, diatonic in many western children's instruments, or chromatic for orchestral use. 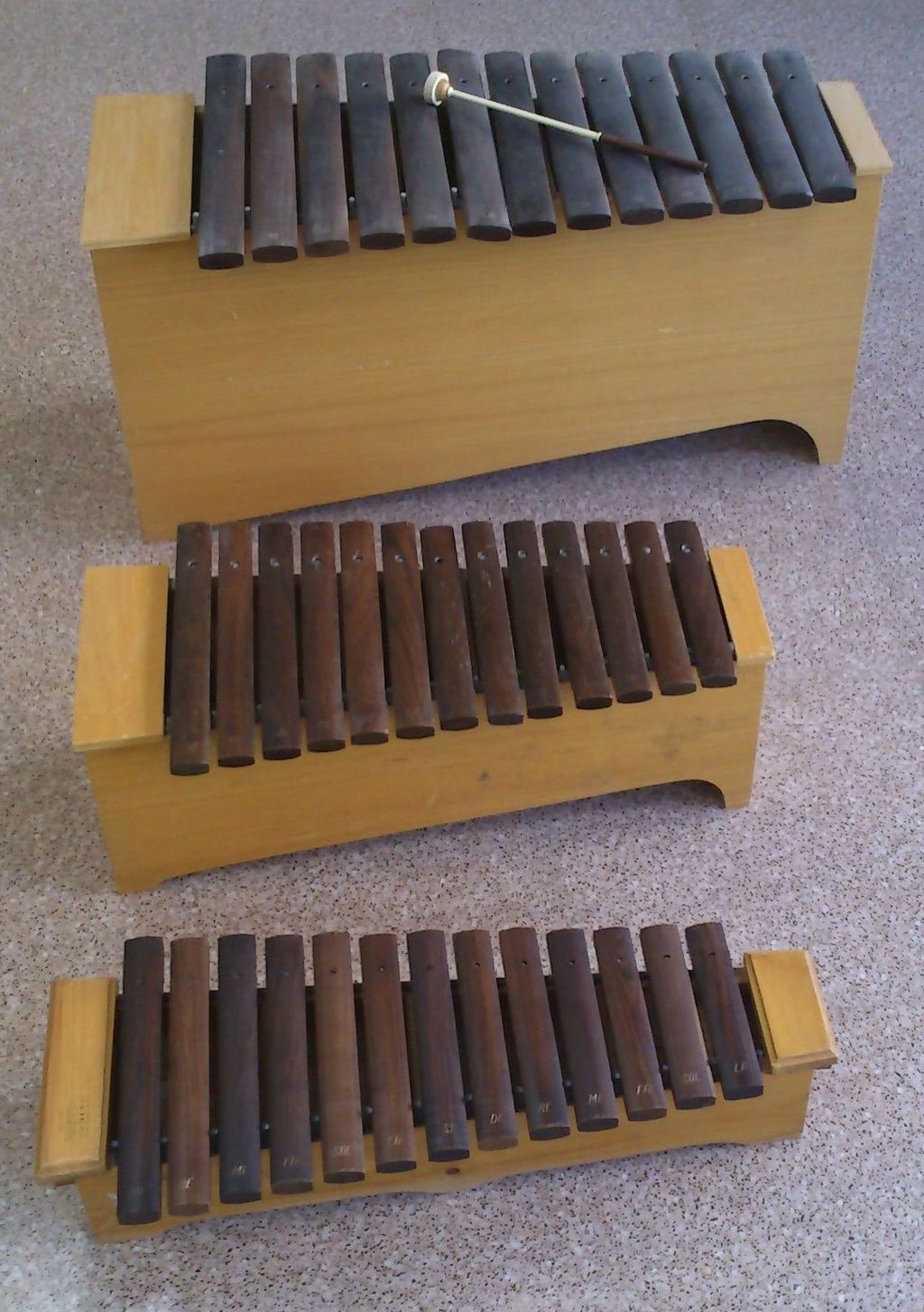 The modern western xylophone has bars of rosewood, padauk, or various synthetic materials such as fiberglass or fiberglass-reinforced plastic which allows a louder sound. Some can be as small a range as 2½ octaves but concert xylophones are typically 3½ or 4 octaves. The xylophone is a transposing instrument: its parts are written one octave below the sounding notes. Xylophones should be played with very hard rubber, polyball, or acrylic mallets. Sometimes medium to hard rubber mallets, very hard core, or yarn mallets are used for softer effects. Lighter tones can be created on xylophones by using wooden-headed mallets made from rosewood, ebony, birch, or other hard woods.

In the following video, Evelyn Glennie plays the xylophone in "Rhythmic Caprice" by Leigh Howard Stevens.

The marimba is a percussion instrument consisting of a set of wooden bars struck with mallets to produce musical tones. Resonators attached to the bars amplify their sound. The bars are arranged as those of a piano, with the accidentals raised vertically and overlapping the natural bars (similar to a piano) to aid the performer both visually and physically. This instrument is a type of idiophone, but with a more resonant and lower-pitched tessitura than the xylophone.

The chromatic marimba was developed in Chiapas, Mexico from the local diatonic marimba, an instrument whose ancestor was a type of balafon that African slaves built in Central America. 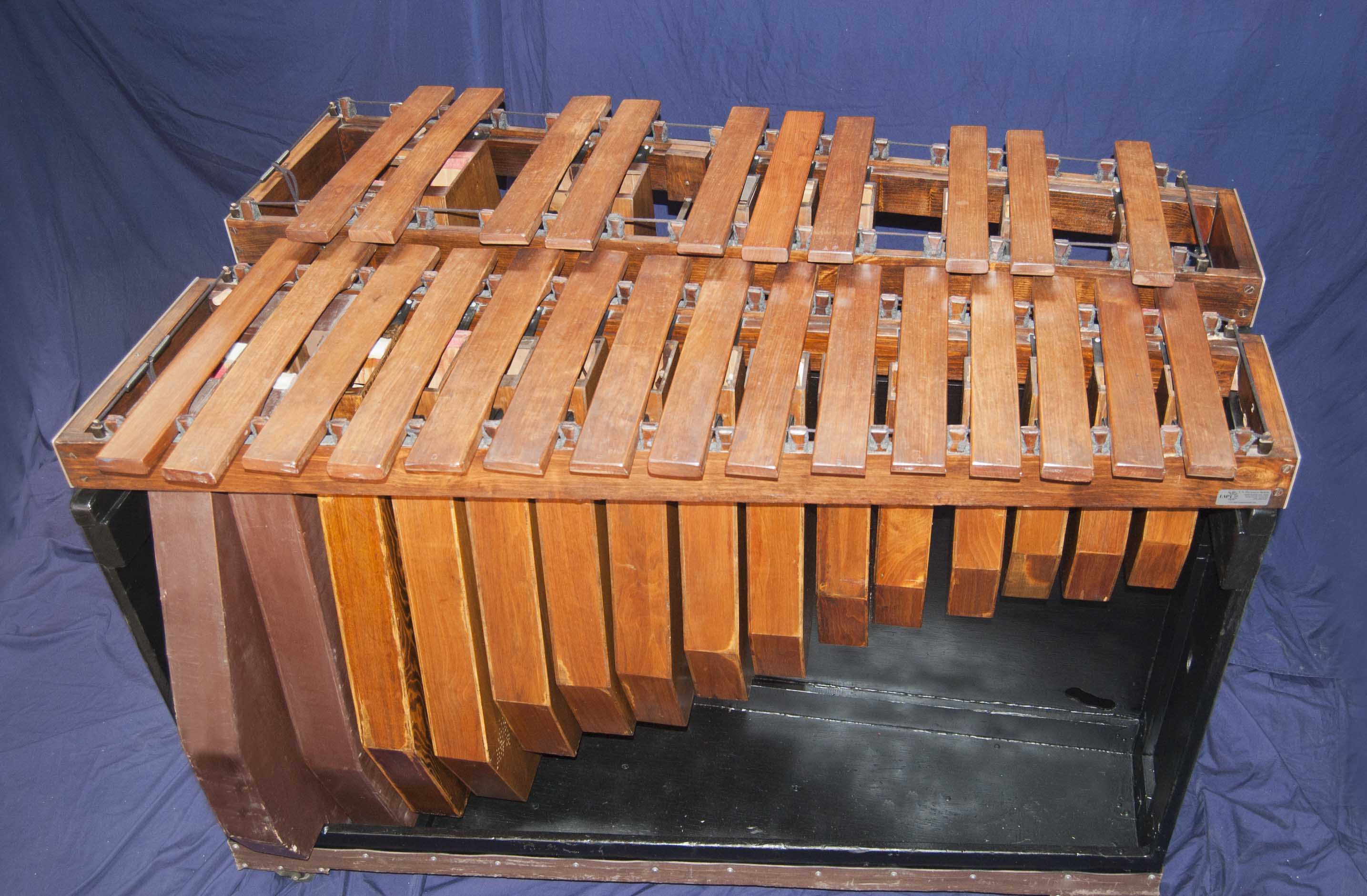 Part of the key to the marimba's rich sound is its resonators. These are tubes (usually aluminum) that hang below each bar.

In the most traditional versions, various sizes of natural gourds are attached below the keys to act as resonators; in more sophisticated versions carved wooden resonators are substituted, allowing for more precise tuning of pitch. In Central America and Mexico, a hole is often carved into the bottom of each resonator and then covered with a delicate membrane taken from the intestine of a pig to add a characteristic "buzzing" or "rattling" sound known as charleo. In more contemporary-style marimbas, wood is replaced by PVC tubing. The holes in the bottoms of the tubes are covered with a thin layer of paper to produce the buzzing noise.

The length of the resonators varies according to the frequency that the bar produces. Vibrations from the bars resonate as they pass through the tubes, which amplify the tone in a manner very similar to the way in which the body of a guitar or cello would.