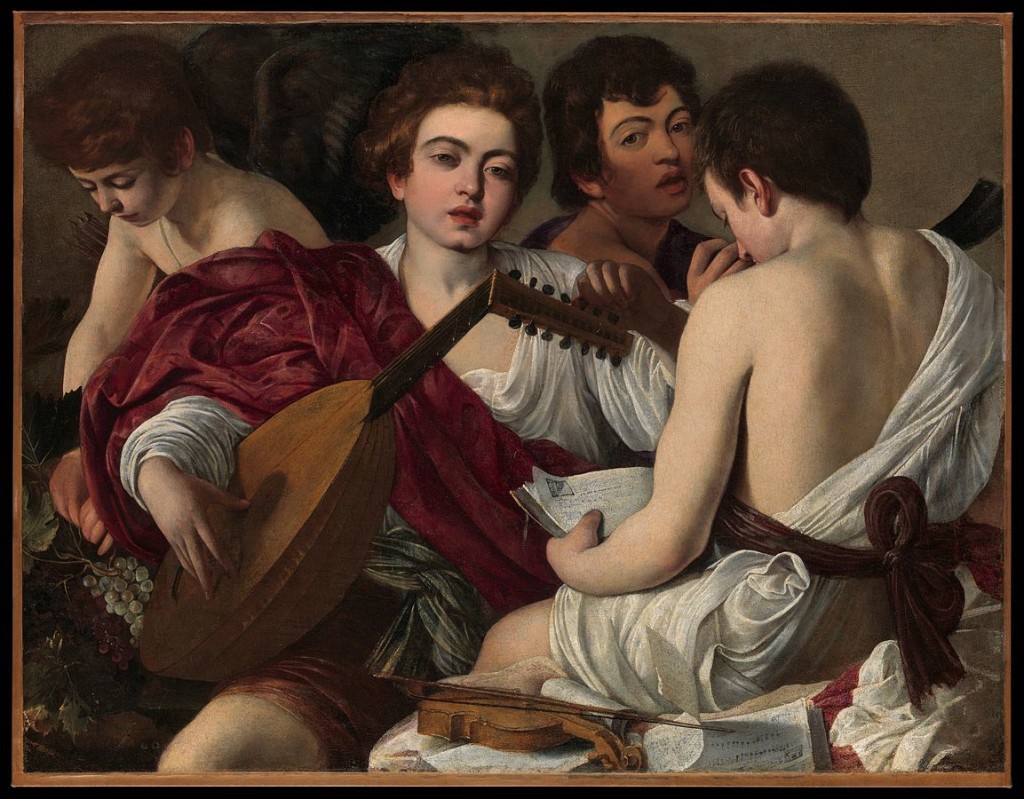 This group gradually dropped the late medieval period's complex devices of isorhythm and extreme syncopation, resulting in a more limpid and flowing style. What their music lost in rhythmic complexity, however, it gained in rhythmic vitality, as a "drive to the cadence" became a prominent feature around mid-century.

In the early 1470s, music started to be printed using a printing press. Music printing had a major effect on how music spread for not only did a printed piece of music reach a larger audience than any manuscript ever could, it did it far more cheaply as well. Also during this century, a tradition of famous makers began for many instruments. These makers were masters of their craft. An example is Neuschel for his trumpets.

Towards the end of the fifteenth century, polyphonic sacred music (as exemplified in the masses of Johannes Ockeghem and Jacob Obrecht) had once again become more complex, in a manner that can perhaps be seen as correlating to the increased exploration of detail in painting at the time. Ockeghem, particularly, was fond of canon, both contrapuntal and mensural. He composed a mass, Missa prolationum, in which all the parts are derived canonically from one musical line.

1611 woodcut of Josquin des Prez, copied from a now-lost oil painting made during his lifetime.

In the early sixteenth century, there is another trend towards simplification, as can be seen to some degree in the work of Josquin des Prez and his contemporaries in the Franco-Flemish School, then later in that of G. P. Palestrina, who was partially reacting to the strictures of the Council of Trent, which discouraged excessively complex polyphony as inhibiting understanding the text. Early sixteenth-century Franco-Flemings moved away from the complex systems of canonic and other mensural play of Ockeghem's generation, tending toward points of imitation and duet or trio sections within an overall texture that grew to five and six voices. They also began, even before the Tridentine reforms, to insert ever-lengthening passages of homophony, to underline important text or points of articulation. Palestrina, on the other hand, came to cultivate a freely flowing style of counterpoint in a thick, rich texture within which consonance followed dissonance on a nearly beat-by-beat basis, and suspensions ruled the day. By now, tactus was generally two semibreves per breve with three per breve used for special effects and climactic sections; this was a nearly exact reversal of the prevailing technique a century before.

In Venice, from about 1534 until around 1600, an impressive polychoral style developed, which gave Europe some of the grandest, most sonorous music composed up until that time, with multiple choirs of singers, brass and strings in different spatial locations in the Basilica San Marco di Venezia. These multiple revolutions spread over Europe in the next several decades, beginning in Germany and then moving to Spain, France and England somewhat later, demarcating the beginning of what we now know as the Baroque musical era. 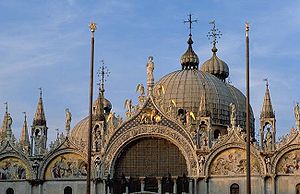 San Marco in the evening. The spacious, resonant interior was one of the inspirations for the music of the Venetian School.

The Roman School was a group of composers of predominantly church music in Rome, spanning the late Renaissance and early Baroque eras. Many of the composers had a direct connection to the Vatican and the papal chapel, though they worked at several churches; stylistically they are often contrasted with the Venetian School of composers, a concurrent movement which was much more progressive. By far the most famous composer of the Roman School is Giovanni Pierluigi da Palestrina. While best known as a prolific composer of masses and motets, he was also an important madrigalist. His ability to bring together the functional needs of the Catholic Church with the prevailing musical styles during the Counter-Reformation period gave him his enduring fame.

The brief but intense flowering of the musical madrigal in England, mostly from 1588 to 1627, along with the composers who produced them, is known as the English Madrigal School. The English madrigals were a cappella, predominantly light in style, and generally began as either copies or direct translations of Italian models. Most were for three to six voices.

Musica reservata is either a style or a performance practice in a cappella vocal music of the latter, mainly in Italy and southern Germany, involving refinement, exclusivity, and intense emotional expression of sung text.

The cultivation of European music in the Americas began in the sixteenth century soon after the arrival of the Spanish, and the conquest of Mexico. Although fashioned in European style, uniquely Mexican hybrid works based on native Mexican language and European musical practice, appeared very early. Musical practices in New Spain continually coincided with European tendencies throughout the subsequent Baroque and Classical music periods. Among these New World composers were Hernando Franco, Antonio de Salazar, and Manuel de Zumaya.

The fifteenth- and sixteenth-century masses had two kinds of sources that were used, monophonic and polyphonic, with two main forms of elaboration, based on cantus firmus practice or, beginning some time around 1500, the new style of pervasive imitation. Four types of masses resulted:

Masses were normally titled by the source from which they borrowed. Cantus firmus mass uses the same monophonic melody, usually drawn from chant and usually in the tenor and most often in longer note values than the other voices.

In the late sixteenth century, as the Renaissance era closed, an extremely manneristic style developed. In secular music, especially in the madrigal, there was a trend towards complexity and even extreme chromaticism (as exemplified in madrigals of Luzzaschi, Marenzio, and Gesualdo). The term "mannerism" derives from art history.

Transition to the Baroque

Beginning in Florence, there was an attempt to revive the dramatic and musical forms of Ancient Greece, through the means of monody, a form of declaimed music over a simple accompaniment; a more extreme contrast with the preceding polyphonic style would be hard to find; this was also, at least at the outset, a secular trend. These musicians were known as the Florentine Camerata.

Music in the Early, Middle, and Late Baroque.docx

Music Appreciation - Paper and Presentation 1 The Middle Ages and Renaissance.docx

Lecture 2 Music in the Middle Ages and the Early Renaissance.pdf