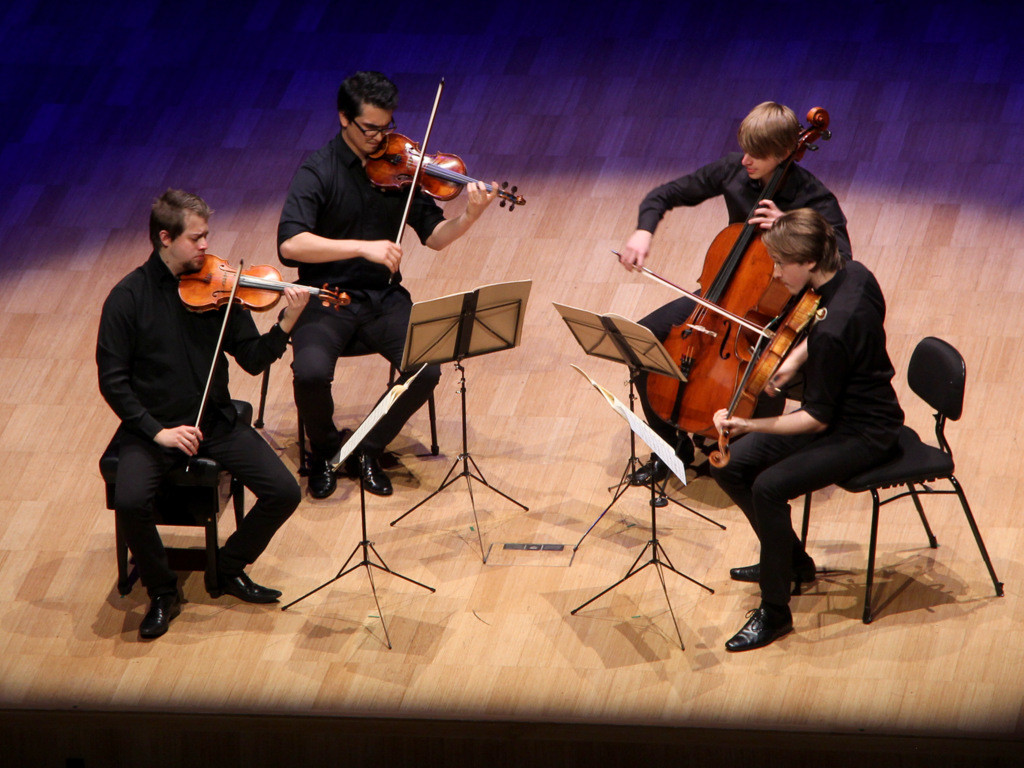 A string quartet is a musical ensemble of four string players–two violin players, a viola player and a cellist–or a piece written to be performed by such a group. The string quartet is one of the most prominent chamber ensembles in classical music, with most major composers, from the mid to late eighteenth century onwards, writing string quartets.

The string quartet was developed into its current form by the Austrian composer Joseph Haydn, with his works in the 1750s establishing the genre. Ever since Haydn's day the string quartet has been considered a prestigious form and represents one of the true tests of the composer's art. With four parts to play with, a composer working in anything like the classical key system has enough lines to fashion a full argument, but none to spare for padding. The closely related characters of the four instruments, moreover, while they cover in combination an ample compass of pitch, do not lend themselves to indulgence in purely colouristic effects. Thus, where the composer of symphonies commands the means for textural enrichment beyond the call of his harmonic discourse, and where the concerto medium offers the further resource of personal characterization and drama in the individual-pitted-against-the-mass vein, the writer of string quartets must perforce concentrate on the bare bones of musical logic. Thus, in many ways the string quartet is preeminently the dialectical form of instrumental music, the one most naturally suited to the activity of logical disputation and philosophical enquiry.

Quartet composition flourished in the classical era, with Mozart, Beethoven, and Schubert following Haydn in each writing a number of quartets. A slight slackening in the pace of quartet composition occurred in the later nineteenth century, in part due to a movement away from classical forms by composers such as Liszt, Wagner and Richard Strauss, though it received a resurgence in the twentieth with the Second Viennese School, Bartók, Shostakovich, and Elliot Carter producing highly regarded examples of the genre. In the twenty-first century it remains an important and refined musical form.

Some quartets play together for many years in ensembles that may be named after the first violinist (e.g. the Takács Quartet), a composer (e.g. the Borodin Quartet) or a location (e.g. the Budapest Quartet). Well-known string quartets can be found in the list of string quartet ensembles.

Please listen to the following composition with the score: