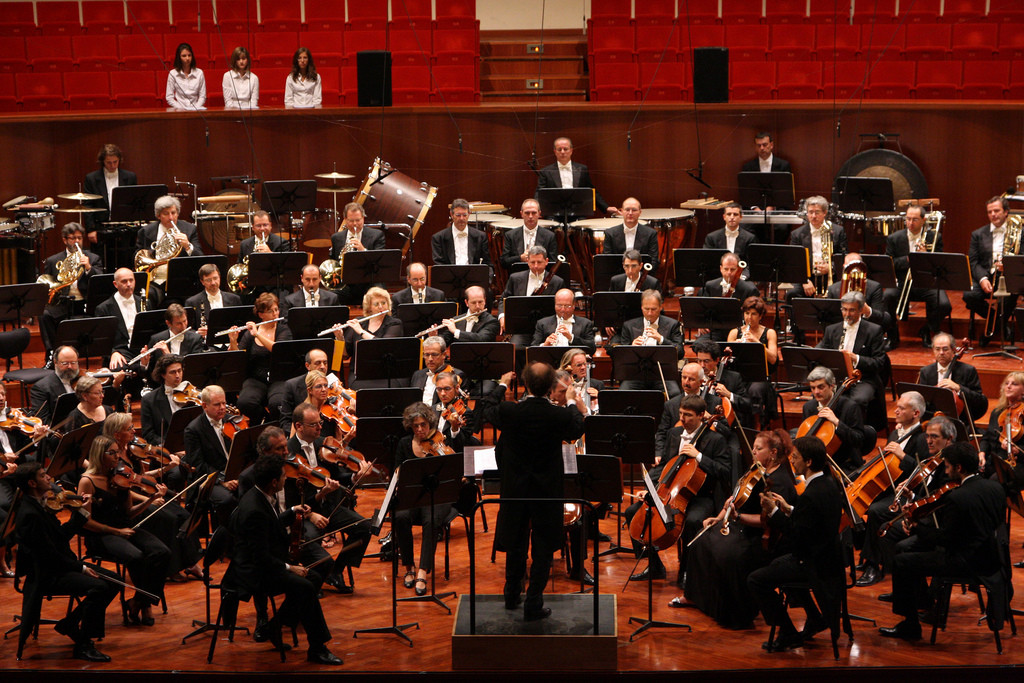 An orchestra is a large instrumental ensemble that contains sections of string (violin, viola, cello, and double bass), brass, woodwind, and percussion instruments. Other instruments such as the piano and celesta may sometimes be grouped into a fifth section such as a keyboard section or may stand alone, as may the concert harp and electric and electronic instruments. The orchestra grew by accretion throughout the eighteenth and nineteenth centuries, but changed very little in composition during the course of the twentieth century.

A smaller-sized orchestra for this time period (of about fifty musicians or fewer) is called a chamber orchestra. A full-size orchestra (about one hundred musicians) may sometimes be called a symphony orchestra or philharmonic orchestra; these modifiers do not necessarily indicate any strict difference in either the instrumental constitution or role of the orchestra, but can be useful to distinguish different ensembles based in the same city (for instance, the London Symphony Orchestra and the London Philharmonic Orchestra). A symphony orchestra will usually have over eighty musicians on its roster, in some cases over a hundred, but the actual number of musicians employed in a particular performance may vary according to the work being played and the size of the venue. A leading chamber orchestra might employ as many as fifty musicians; some are much smaller than that. The term concert orchestra may sometimes be used (e.g., BBC Concert Orchestra; RTÉ Concert Orchestra)—no distinction is made on size of orchestra by use of this term, although their use is generally distinguished as for live concert. As such they are commonly chamber orchestras. There are several types of amateur orchestras, including school orchestras, youth orchestras and community orchestras.

Orchestras are usually led by a conductor who directs the performance by way of visible gestures. The conductor unifies the orchestra, sets the tempo and shapes the sound of the ensemble.

The typical symphony orchestra consists of four groups of related musical instruments called the woodwinds, brass, percussion, and strings (violin, viola, cello, and double bass). Other instruments such as the piano and celesta may sometimes be grouped into a fifth section such as a keyboard section or may stand alone, as may the concert harp and electric and electronic instruments. The orchestra, depending on the size, contains almost all of the standard instruments in each group. In the history of the orchestra, its instrumentation has been expanded over time, often agreed to have been standardized by the classical period and Ludwig van Beethoven's influence on the classical model. In the twentieth century, new repertory (musical pieces) demands expanded the instrumentation of the orchestra, resulting in a flexible use of the classical model instruments in various combinations.

Among the instrument groups and within each group of instruments, there is a generally accepted hierarchy. Every instrumental group (or section) has a principal who is generally responsible for leading the group and playing orchestral solos. The violins are divided into two groups, first violin and second violin, with the second violins playing with lower registers than the first violins.

The principal trombone is considered the leader of the low brass section, while the principal trumpet is generally considered the leader of the entire brass section. While the oboe often provides the tuning note for the orchestra (due to three-hundred-year-old convention), no principal is the leader of the woodwind section though in woodwind ensembles, often the flute is leader. Instead, each principal confers with the others as equals in the case of musical differences of opinion. The horn, while technically a brass instrument, often acts in the role of both woodwind and brass. Most sections also have an assistant principal (or co-principal or associate principal), or in the case of the first violins, an assistant concertmaster, who often plays a tutti (all together) part in addition to replacing the principal in his or her absence.

A section string player plays in unison with the rest of the section, except in the case of divided (divisi) parts, where upper and lower parts in the music are often assigned to "outside" (nearer the audience) and "inside" seated players. Where a solo part is called for in a string section, the section leader invariably plays that part. The section leader (or principal) of a string section is also responsible for determining the bowings, often based on the bowings set out by the concertmaster. In some cases, the principal of a string section may use a slightly different bowing than the Concertmaster, to accommodate the requirements of playing their instrument (e.g., the double bass section). Principals of a string section will also lead entrances for their section, typically by lifting the bow before the entrance, to ensure the section plays together. Tutti wind and brass players generally play a unique but non-solo part. Section percussionists play parts assigned to them by the principal percussionist.

Conducting is the art of directing a musical performance, such as a concert, by way of visible gestures with the hands, arms, face and head. The primary duties of the conductor are to unify performers, set the tempo, execute clear preparations and beats (meter), and to listen critically and shape the sound of the ensemble.

In the following video, Leonard Bernstein, one of the most famous modern conductors, is shown conducting the London Symphony Orchestra as they play the Candide Overture.  Note his body language and facial expressions as he leads the orchestra.


The conductor typically stands on a raised podium and he or she may or may not use a wooden baton. Most conductors do not play an instrument when conducting, but in some cases, a conductor may lead an ensemble while playing a keyboard instrument or the violin, particularly with Baroque music. Communication is typically non-verbal during a performance (this is typically the case in art music, but in jazz big bands or large pop ensembles, there may be occasional spoken instructions.) However in rehearsals, frequent interruptions allow the conductor to give verbal directions as to how the music should be played or sung.

Recent Trends in the United States

In the United States, the late twentieth century saw a crisis of funding and support for orchestras. The size and cost of a symphony orchestra, compared to the size of the base of supporters, became an issue that struck at the core of the institution. Few orchestras could fill auditoriums, and the time-honored season-subscription system became increasingly anachronistic, as more and more listeners would buy tickets on an ad hoc basis for individual events. Orchestral endowments and—more centrally to the daily operation of American orchestras—orchestral donors have seen investment portfolios shrink or produce lower yields, reducing the ability of donors to contribute; further, there has been a trend toward donors finding other social causes more compelling. Also, while government funding is less central to American than European orchestras, cuts in such funding are still significant for American ensembles. Finally, the drastic falling-off of revenues from recording, tied to no small extent to changes in the recording industry itself, began a period of change that has yet to reach its conclusion.