Bones of the Lower Limb


Like the upper limb, the lower limb is divided into three regions. The thigh is that portion of the lower limb located between the hip joint and knee joint. The leg is specifically the region between the knee joint and the ankle joint. Distal to the ankle is the foot. The lower limb contains 30 bones. These are the femur, patella, tibia, fibula, tarsal bones, metatarsal bones, and phalanges (see Figure 6.51). The femur is the single bone of the thigh. The patella is the kneecap and articulates with the distal femur. The tibia is the larger, weight-bearing bone located on the medial side of the leg, and the fibula is the thin bone of the lateral leg. The bones of the foot are divided into three groups. The posterior portion of the foot is formed by a group of seven bones, each of which is known as a tarsal bone, whereas the mid-foot contains five elongated bones, each of which is a metatarsal bone. The toes contain 14 small bones, each of which is a phalanx bone of the foot.

The femur, or thigh bone, is the single bone of the thigh region (Figure 6.51). It is the longest and strongest bone of the body, and accounts for approximately one-quarter of a person’s total height. The rounded, proximal end is the head of the femur, which articulates with the acetabulum of the hip bone to form the hip joint. 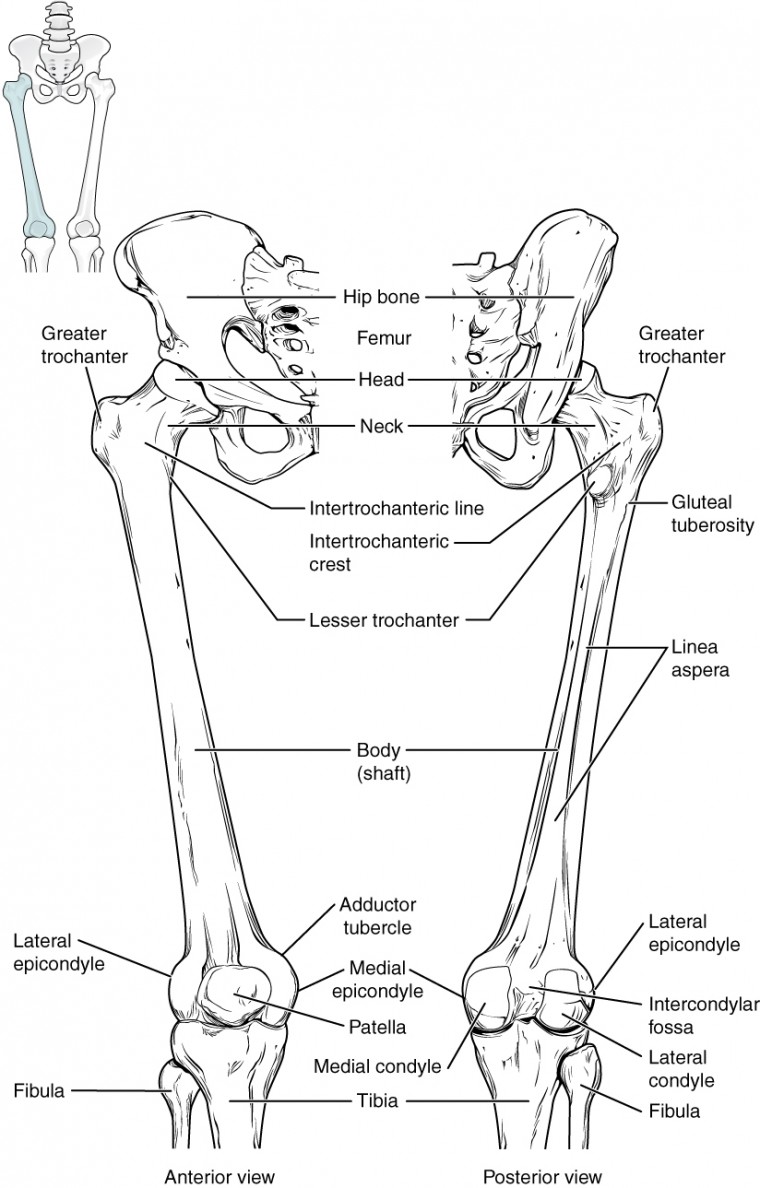 Figure 6.51. Femur and Patella
The femur is the single bone of the thigh region. It articulates superiorly with the hip bone at the hip joint, and inferiorly with the tibia at the knee joint. The patella only articulates with the distal end of the femur.
The narrowed region below the head is the neck of the femur. This is a common area for fractures of the femur. The greater trochanter is the large, upward, bony projection located above the base of the neck. Multiple muscles that act across the hip joint attach to the greater trochanter, which, because of its projection from the femur, gives additional leverage to these muscles. The greater trochanter can be felt just under the skin on the lateral side of your upper thigh. The lesser trochanter is a small, bony prominence that lies on the medial aspect of the femur, just below the neck.

Watch this video to view how a fracture of the mid-femur is surgically repaired. How are the two portions of the broken femur stabilized during surgical repair of a fractured femur?

The patella (kneecap) is largest sesamoid bone of the body (see Figure 6.51). A sesamoid bone is a bone that is incorporated into the tendon of a muscle where that tendon crosses a joint. The sesamoid bone articulates with the underlying bones to prevent damage to the muscle tendon due to rubbing against the bones during movements of the joint. The patella is found in the tendon of the quadriceps femoris muscle, the large muscle of the anterior thigh that passes across the anterior knee to attach to the tibia. The patella articulates with the patellar surface of the femur and thus prevents rubbing of the muscle tendon against the distal femur. The patella also lifts the tendon away from the knee joint, which increases the leverage power of the quadriceps femoris muscle as it acts across the knee. The patella does not articulate with the tibia.

Visit this site to perform a virtual knee replacement surgery. The prosthetic knee components must be properly aligned to function properly. How is this alignment ensured?

The tibia (shin bone) is the medial bone of the leg and is larger than the fibula, with which it is paired (Figure 6.52). The tibia is the main weight-bearing bone of the lower leg and the second longest bone of the body, after the femur. The medial side of the tibia is located immediately under the skin, allowing it to be easily palpated down the entire length of the medial leg. 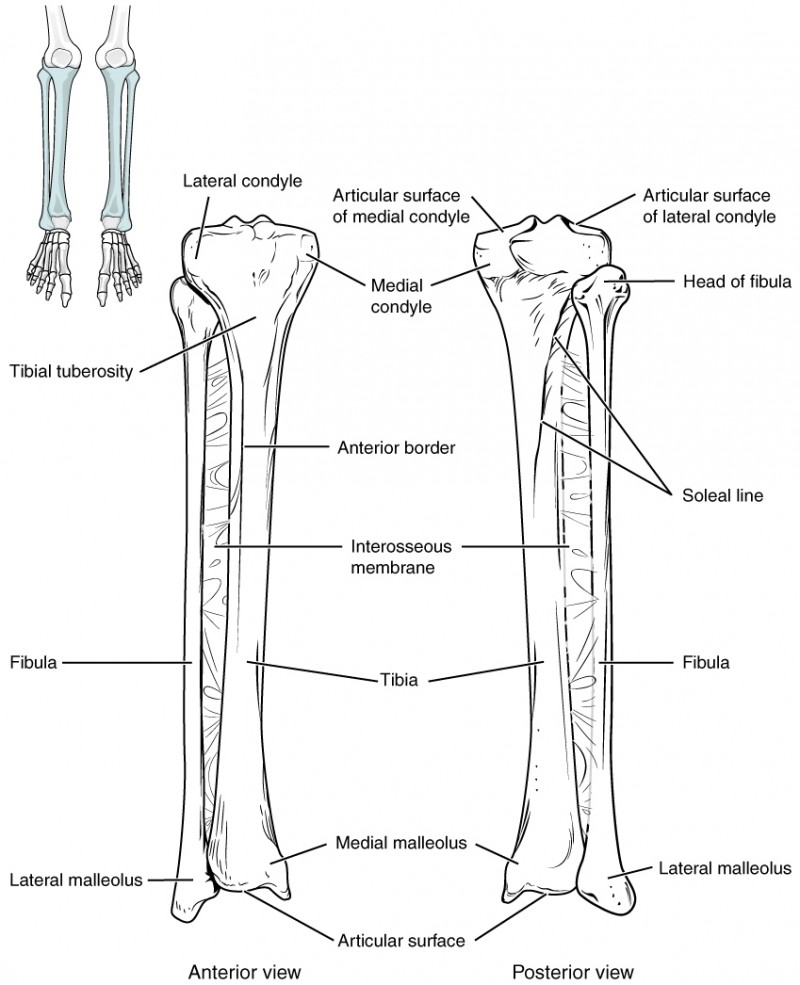 Figure 6.52. Tibia and Fibula
The tibia is the larger, weight-bearing bone located on the medial side of the leg. The fibula is the slender bone of the lateral side of the leg and does not bear weight.
The proximal end of the tibia is greatly expanded. The two sides of this expansion form the medial condyle of the tibia and the lateral condyle of the tibia. The tibia does not have epicondyles. The top surface of each condyle is smooth and flattened. These areas articulate with the medial and lateral condyles of the femur to form the knee joint. Between the articulating surfaces of the tibial condyles is the intercondylar eminence, an irregular, elevated area that serves as the inferior attachment point for two supporting ligaments of the knee.

The tibial tuberosity is an elevated area on the anterior side of the tibia, near its proximal end. It is the final site of attachment for the muscle tendon associated with the patella. More inferiorly, the shaft of the tibia becomes triangular in shape.

The fibula is the slender bone located on the lateral side of the leg (see Figure 6.52). The fibula does not bear weight. It serves primarily for muscle attachments and thus is largely surrounded by muscles. Only the proximal and distal ends of the fibula can be palpated.

The posterior half of the foot is formed by seven tarsal bones (Figure 6.53). The most superior bone is the talus. This has a relatively square-shaped, upper surface that articulates with the tibia and fibula to form the ankle joint. Inferiorly, the talus articulates with the calcaneus (heel bone), the largest bone of the foot, which forms the heel. Body weight is transferred from the tibia to the talus to the calcaneus, which rests on the ground. The medial calcaneus has a prominent bony extension called the sustentaculum tali (“support for the talus”) that supports the medial side of the talus bone. 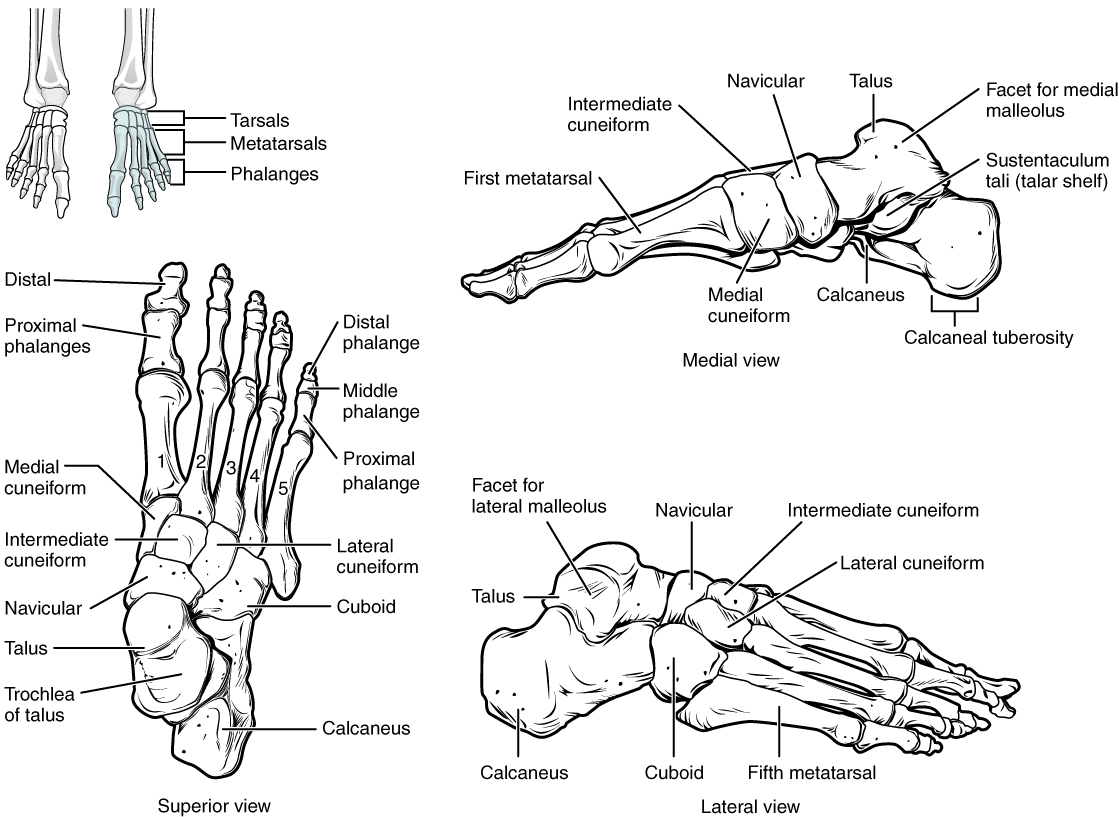 Figure 6.53. Bones of the Foot
The bones of the foot are divided into three groups. The posterior foot is formed by the seven tarsal bones. The mid-foot has the five metatarsal bones. The toes contain the phalanges.
The cuboid bone articulates with the anterior end of the calcaneus bone. The cuboid has a deep groove running across its inferior surface, which provides passage for a muscle tendon. The talus bone articulates anteriorly with the navicular bone, which in turn articulates anteriorly with the three cuneiform (“wedge-shaped”) bones. These bones are the medial cuneiform, the intermediate cuneiform, and the lateral cuneiform. Each of these bones has a broad superior surface and a narrow inferior surface, which together produce the transverse (medial-lateral) curvature of the foot. The navicular and lateral cuneiform bones also articulate with the medial side of the cuboid bone.

Use this tutorial to review the bones of the foot. Which tarsal bones are in the proximal, intermediate, and distal groups?

The anterior half of the foot is formed by the five metatarsal bones, which are located between the tarsal bones of the posterior foot and the phalanges of the toes (see Figure 6.53). These elongated bones are numbered 1–5, starting with the medial side of the foot.

View this link to learn about a bunion, a localized swelling on the medial side of the foot, next to the first metatarsophalangeal joint, at the base of the big toe. What is a bunion and what type of shoe is most likely to cause this to develop?

NURSING 11 •  Our Lady of Fatima Univ