Visual and auditory stimuli both occur in the form of waves. Although the two stimuli are very different in terms of composition, wave forms share similar characteristics that are especially important to our visual and auditory perceptions. In this section, we describe the physical properties of the waves as well as the perceptual experiences associated with them.

This figure illustrates waves of differing wavelengths/frequencies. At the top of the figure, the red wave has a long wavelength/short frequency. Moving from top to bottom, the wavelengths decrease and frequencies increase.

Light that is visible to humans makes up only a small portion of the electromagnetic spectrum.

Different wavelengths of light are associated with our perception of different colors. (credit: modification of work by Johannes Ahlmann)

The loudness of a given sound is closely associated with the amplitude of the sound wave. Higher amplitudes are associated with louder sounds. Loudness is measured in terms of decibels (dB), a logarithmic unit of sound intensity. A typical conversation would correlate with 60 dB; a rock concert might check in at 120 dB. A whisper 5 feet away or rustling leaves are at the low end of our hearing range; sounds like a window air conditioner, a normal conversation, and even heavy traffic or a vacuum cleaner are within a tolerable range. However, there is the potential for hearing damage from about 80 dB to 130 dB: These are sounds of a food processor, power lawnmower, heavy truck (25 feet away), subway train (20 feet away), live rock music, and a jackhammer. The threshold for pain is about 130 dB, a jet plane taking off or a revolver firing at close range (Dunkle, 1982). 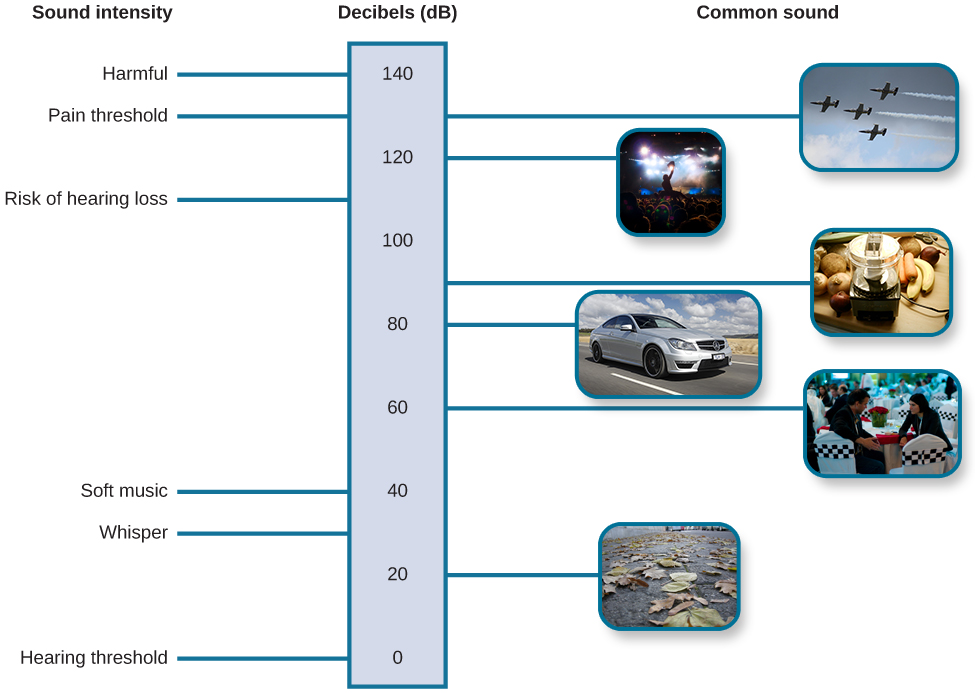 Watch this brief video demonstrating how frequency and amplitude interact in our perception of loudness.

Of course, different musical instruments can play the same musical note at the same level of loudness, yet they still sound quite different. This is known as the timbre of a sound. Timbre refers to a sound’s purity, and it is affected by the complex interplay of frequency, amplitude, and timing of sound waves.

Which of the following correctly matches the pattern in our perception of color as we move from short wavelengths to long wavelengths?

The visible spectrum includes light that ranges from about ________.

The quality of a sound that is affected by frequency, amplitude, and timing of the sound wave is known as ________.

Why do you think other species have such different ranges of sensitivity for both visual and auditory stimuli compared to humans?

Other species have evolved to best suit their particular environmental niches. For example, the honeybee relies on flowering plants for survival. Seeing in the ultraviolet light might prove especially helpful when locating flowers. Once a flower is found, the ultraviolet rays point to the center of the flower where the pollen and nectar are contained. Similar arguments could be made for infrared detection in snakes as well as for the differences in audible ranges of the species described in this section.

Why do you think humans are especially sensitive to sounds with frequencies that fall in the middle portion of the audible range?

Once again, one could make an evolutionary argument here. Given that the human voice falls in this middle range and the importance of communication among humans, one could argue that it is quite adaptive to have an audible range that centers on this particular type of stimulus.

If you grew up with a family pet, then you have surely noticed that they often seem to hear things that you don’t hear. Now that you’ve read this section, you probably have some insight as to why this may be. How would you explain this to a friend who never had the opportunity to take a class like this?

amplitude
height of a wave

pitch
perception of a sound’s frequency

trough
lowest point of a wave

visible spectrum
portion of the electromagnetic spectrum that we can see

Properties of a wave such as wavelength.docx