Since the major difference between “presenting” to a public audience versus “presenting” to a small group of close friends involves one’s attitude about the situation. Overcoming CA is as much a matter of changing one’s attitude as it is developing one’s skills as a speaker. A change in attitude can be fostered through a self-reflective regimen called cognitive restructuring (CR), which is an internal process through which individuals can deliberately adjust how they perceive an action or experience (Mattick et al., 1989).

These steps are easy to understand, but perhaps may be a bit difficult to execute! The first step is to identify objectively what you are thinking as you approach a public speaking opportunity. Recall your habitual frame of reference. The first step in CR is to shine a bright light directly on it. This will be different for each student undertaking the process.

After years of interviewing students from my classes, the two concerns most often described are the feeling of being the center of attention—as if you are under some collective microscope with everybody’s eyes on you; and the feeling that the audience is just waiting for you to make a mistake or slip up somehow—and that their disapproval will be swift, immediate, and embarrassing. Let’s discuss how CR might be applied to each of these widely-held perceptions.

Probably the most common concern people have is being the “center of attention.” When people describe this specific scrutiny fear, they use phrases like “everyone just stares at me,” or “I don’t like having all eyes on me.” Consider for a moment what your experiences have been like when you have been a member of the audience for another speaker. Where did you look while the person spoke? Did you look at the speaker? Direct eye contact can mean different things in different cultures, but in U.S. culture, eye contact is the primary means for an audience to demonstrate that they are listening to a speaker. Nobody likes to be ignored, and most members of an audience would not want to be perceived as ignoring the speaker—that would be rude! Compare: before CR, the frame of reference reflects the idea that “everyone is staring at me”; after CR, the perception is altered to “the audience is looking at me to be supportive and polite—after all, I’m the one doing the talking.” 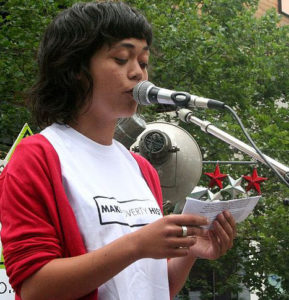 Another common concern is the fear of being judged harshly or making an embarrassing mistake. Go back to that memory of you as a member of the audience, but this time reflect on what sort of expectations you had at the time. Did you expect the speaker to be flawless and riveting? Did you have in mind some super-high level of performance—below which the speaker would have disappointed you? Probably you did not (unless you had the chance to watch some prominent speaker). Think back to any experiences you may have had watching another speaker struggle—perhaps a classmate during one of their presentations. Witnessing something like that can be uncomfortable. Did you feel empathy for the person struggling? Isn’t it a much more pleasant experience when the speaker does well? Again, the vast majority of people empathize with the speaker when it comes to the quality of the presentation. They are willing to give the speaker a chance to say what they want to say. Thus: before CR, the frame of reference reflects the idea that “everyone is judging me harshly”; and after CR, the perception is altered to “the audience is willing to listen to what I have to say because it’s a more pleasant experience for them if the speaker is successful.”

Consider what comes into your mind if you are to deliver a public presentation. Are your thoughts consumed with many uncertainties. What if I make a mistake? What if they don’t like what I’m talking about? What if? Try your own version of CR. Put yourself in the role of audience member and ask yourself whether your fears as a speaker are consistent with your expectations as an audience member. Remember that, just like you, the audience wants the speaker to succeed. Of course CR, unfortunately, is always easier said than done. It is a process that takes time, patience, and practice. The most important thing to remember is that you are trying CR as a means of breaking a habit, and habits are formed over periods of time, never instantaneously. The breaking of a habit, similarly, cannot be done instantaneously, but gradually, over time and with deliberate effort.

Changing your attitude is only one element in overcoming CA. The other involves improving your skills as a speaker. The presence of CA in any student brings with it the need to prepare more deliberately and more diligently. The other chapters in this book deal with the importance of preparation in all areas of public presentation. Readers should consider how the challenges involved with overcoming CA can impact the preparation process.

It usually takes me more than three weeks to prepare a good impromptu speech.