The concept of temperature has evolved from the common concepts of hot and cold. Human perception of what feels hot or cold is a relative one. For example, if you place one hand in hot water and the other in cold water, and then place both hands in tepid water, the tepid water will feel cool to the hand that was in hot water, and warm to the one that was in cold water. The scientific definition of temperature is less ambiguous than your senses of hot and cold. Temperature is operationally defined to be what we measure with a thermometer. (Many physical quantities are defined solely in terms of how they are measured. We shall see later how temperature is related to the kinetic energies of atoms and molecules, a more physical explanation.) Two accurate thermometers, one placed in hot water and the other in cold water, will show the hot water to have a higher temperature. If they are then placed in the tepid water, both will give identical readings (within measurement uncertainties). In this section, we discuss temperature, its measurement by thermometers, and its relationship to thermal equilibrium. Again, temperature is the quantity measured by a thermometer.

On a cold winter morning, the wood on a porch feels warmer than the metal of your bike. The wood and bicycle are in thermal equilibrium with the outside air, and are thus the same temperature. They feel different because of the difference in the way that they conduct heat away from your skin. The metal conducts heat away from your body faster than the wood does (see more about conductivity in Conduction). This is just one example demonstrating that the human sense of hot and cold is not determined by temperature alone.

Another factor that affects our perception of temperature is humidity. Most people feel much hotter on hot, humid days than on hot, dry days. This is because on humid days, sweat does not evaporate from the skin as efficiently as it does on dry days. It is the evaporation of sweat (or water from a sprinkler or pool) that cools us off. 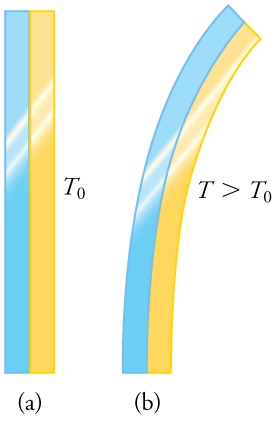 Other properties used to measure temperature include electrical resistance and color and the emission of infrared radiation. 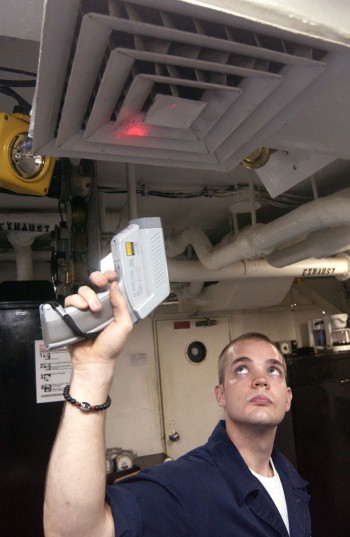 An example of emission of radiation is shown in the use of a pyrometer (Figure 3). Infrared radiation (whose emission varies with temperature) from the vent in Figure 3 is measured and a temperature readout is quickly produced. Infrared measurements are also frequently used as a measure of body temperature. These modern thermometers, placed in the ear canal, are more accurate than alcohol thermometers placed under the tongue or in the armpit.

Thermometers are used to measure temperature according to well-defined scales of measurement, which use pre-defined reference points to help compare quantities. The three most common temperature scales are the Fahrenheit, Celsius, and Kelvin scales. A temperature scale can be created by identifying two easily reproducible temperatures. The freezing and boiling temperatures of water at standard atmospheric pressure are commonly used.

The Celsius scale (which replaced the slightly different centigrade scale) has the freezing point of water at 0ºC and the boiling point at 100ºC. Its unit is the degree Celsius(ºC). On the Fahrenheit scale (still the most frequently used in the United States), the freezing point of water is at 32ºF and the boiling point is at 212ºF. The unit of temperature on this scale is the degree Fahrenheit(ºF). Note that a temperature difference of one degree Celsius is greater than a temperature difference of one degree Fahrenheit. Only 100 Celsius degrees span the same range as 180 Fahrenheit degrees, thus one degree on the Celsius scale is 1.8 times larger than one degree on the Fahrenheit scale 180/100=9/5. 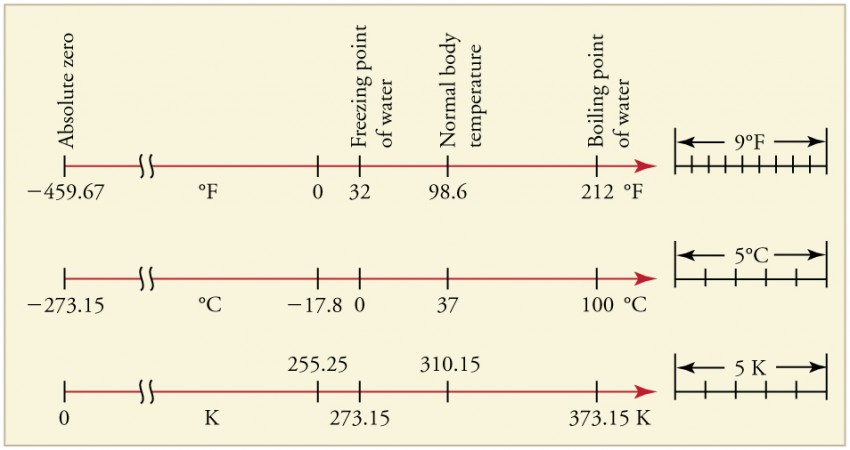 Figure 4. Relationships between the Fahrenheit, Celsius, and Kelvin temperature scales, rounded to the nearest degree. The relative sizes of the scales are also shown.

The relationships between the three common temperature scales is shown in Figure 4. Temperatures on these scales can be converted using the equations in Table 1.

“Room temperature” is generally defined to be 25ºC.

To answer these questions, all we need to do is choose the correct conversion equations and plug in the known values.

Temperature Ranges in the Universe

Figure 6 shows the wide range of temperatures found in the universe. Human beings have been known to survive with body temperatures within a small range, from 24ºC to 44ºC (75ºF to 111ºF). The average normal body temperature is usually given as 37.0ºC (98.6ºF), and variations in this temperature can indicate a medical condition: a fever, an infection, a tumor, or circulatory problems (see Figure 5). 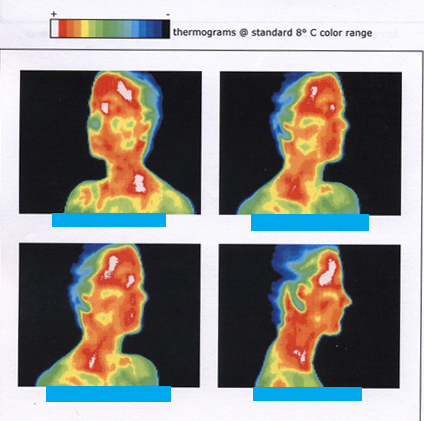 Figure 5. This image of radiation from a person’s body (an infrared thermograph) shows the location of temperature abnormalities in the upper body. Dark blue corresponds to cold areas and red to white corresponds to hot areas. An elevated temperature might be an indication of malignant tissue (a cancerous tumor in the breast, for example), while a depressed temperature might be due to a decline in blood flow from a clot. In this case, the abnormalities are caused by a condition called hyperhidrosis. (credit: Porcelina81, Wikimedia Commons)

The lowest temperatures ever recorded have been measured during laboratory experiments: 4.5 × 10−10 K at the Massachusetts Institute of Technology (USA), and 1.0 × 10−10 K at Helsinki University of Technology (Finland). In comparison, the coldest recorded place on Earth’s surface is Vostok, Antarctica at 183 K (–89ºC), and the coldest place (outside the lab) known in the universe is the Boomerang Nebula, with a temperature of 1 K.

Figure 6. Each increment on this logarithmic scale indicates an increase by a factor of ten, and thus illustrates the tremendous range of temperatures in nature. Note that zero on a logarithmic scale would occur off the bottom of the page at infinity.

Thermal Equilibrium and the Zeroth Law of Thermodynamics 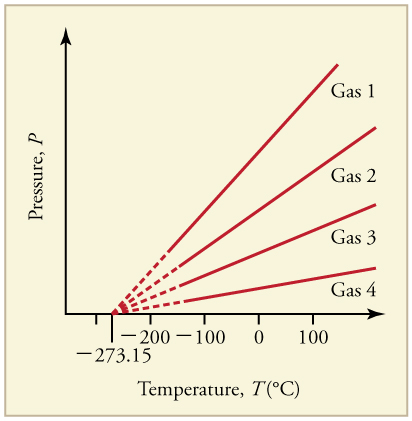 Figure 7. Graph of pressure versus temperature for various gases kept at a constant volume. Note that all of the graphs extrapolate to zero pressure at the same temperature.

Thermometers actually take their own temperature, not the temperature of the object they are measuring. This raises the question of how we can be certain that a thermometer measures the temperature of the object with which it is in contact. It is based on the fact that any two systems placed in thermal contact (meaning heat transfer can occur between them) will reach the same temperature. That is, heat will flow from the hotter object to the cooler one until they have exactly the same temperature. The objects are then in thermal equilibrium, and no further changes will occur. The systems interact and change because their temperatures differ, and the changes stop once their temperatures are the same. Thus, if enough time is allowed for this transfer of heat to run its course, the temperature a thermometer registers does represent the system with which it is in thermal equilibrium. Thermal equilibrium is established when two bodies are in contact with each other and can freely exchange energy.

The Zeroth Law of Thermodynamics


This law was postulated in the 1930s, after the first and second laws of thermodynamics had been developed and named. It is called the zeroth law because it comes logically before the first and second laws (discussed in Thermodynamics). An example of this law in action is seen in babies in incubators: babies in incubators normally have very few clothes on, so to an observer they look as if they may not be warm enough. However, the temperature of the air, the cot, and the baby is the same, because they are in thermal equilibrium, which is accomplished by maintaining air temperature to keep the baby comfortable.

Does the temperature of a body depend on its size?

temperature: the quantity measured by a thermometer

absolute zero: the lowest possible temperature; the temperature at which all molecular motion ceases

thermal equilibrium: the condition in which heat no longer flows between two objects that are in contact; the two objects have the same temperature