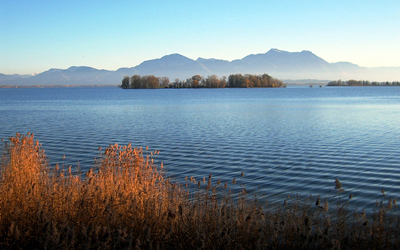 Most waves do not look very simple. They look more like the waves in Figure 1 than like the simple water wave considered in Waves. (Simple waves may be created by a simple harmonic oscillation, and thus have a sinusoidal shape). Complex waves are more interesting, even beautiful, but they look formidable. Most waves appear complex because they result from several simple waves adding together. Luckily, the rules for adding waves are quite simple.

Figure 2 shows two identical waves that arrive at the same point exactly in phase. The crests of the two waves are precisely aligned, as are the troughs. This superposition produces pure constructive interference. Because the disturbances add, pure constructive interference produces a wave that has twice the amplitude of the individual waves, but has the same wavelength. 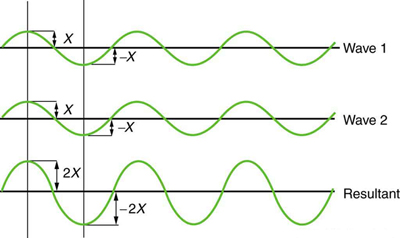 Figure 2. Pure constructive interference of two identical waves produces one with twice the amplitude, but the same wavelength. 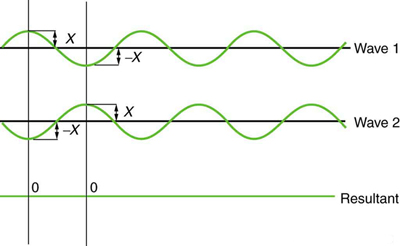 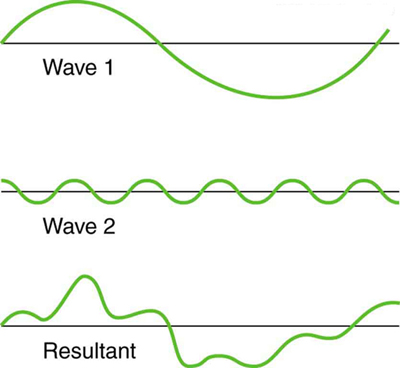 While pure constructive and pure destructive interference do occur, they require precisely aligned identical waves. The superposition of most waves produces a combination of constructive and destructive interference and can vary from place to place and time to time. Sound from a stereo, for example, can be loud in one spot and quiet in another. Varying loudness means the sound waves add partially constructively and partially destructively at different locations. A stereo has at least two speakers creating sound waves, and waves can reflect from walls. All these waves superimpose. An example of sounds that vary over time from constructive to destructive is found in the combined whine of airplane jets heard by a stationary passenger. The combined sound can fluctuate up and down in volume as the sound from the two engines varies in time from constructive to destructive. These examples are of waves that are similar.An example of the superposition of two dissimilar waves is shown in Figure 4. Here again, the disturbances add and subtract, producing a more complicated looking wave.

Sometimes waves do not seem to move; rather, they just vibrate in place. Unmoving waves can be seen on the surface of a glass of milk in a refrigerator, for example. Vibrations from the refrigerator motor create waves on the milk that oscillate up and down but do not seem to move across the surface. These waves are formed by the superposition of two or more moving waves, such as illustrated in Figure 5 for two identical waves moving in opposite directions. The waves move through each other with their disturbances adding as they go by. If the two waves have the same amplitude and wavelength, then they alternate between constructive and destructive interference. The resultant looks like a wave standing in place and, thus, is called a standing wave. Waves on the glass of milk are one example of standing waves. There are other standing waves, such as on guitar strings and in organ pipes. With the glass of milk, the two waves that produce standing waves may come from reflections from the side of the glass.

A closer look at earthquakes provides evidence for conditions appropriate for resonance, standing waves, and constructive and destructive interference. A building may be vibrated for several seconds with a driving frequency matching that of the natural frequency of vibration of the building—producing a resonance resulting in one building collapsing while neighboring buildings do not. Often buildings of a certain height are devastated while other taller buildings remain intact. The building height matches the condition for setting up a standing wave for that particular height. As the earthquake waves travel along the surface of Earth and reflect off denser rocks, constructive interference occurs at certain points. Often areas closer to the epicenter are not damaged while areas farther away are damaged.

Figure 5. Standing wave created by the superposition of two identical waves moving in opposite directions. The oscillations are at fixed locations in space and result from alternately constructive and destructive interference.

The lowest frequency, called the fundamental frequency, is thus for the longest wavelength, which is seen to be λ1 = 2L. Therefore, the fundamental frequency is
f1​=λ1​vw​​=2Lvw​​
. In this case, the overtones or harmonics are multiples of the fundamental frequency. As seen in Figure 7, the first harmonic can easily be calculated since λ2 = L. Thus,
f2​=λ2​vw​​=2Lvw​​=2f1​
. Similarly, f3 = 3f1, and so on. All of these frequencies can be changed by adjusting the tension in the string. The greater the tension, the greater vw is and the higher the frequencies. This observation is familiar to anyone who has ever observed a string instrument being tuned. We will see in later chapters that standing waves are crucial to many resonance phenomena, such as in sounding boxes on string instruments. 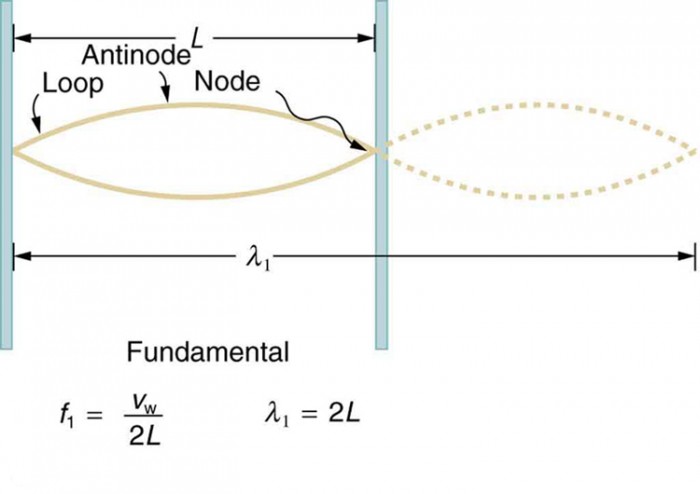 Figure 6. The figure shows a string oscillating at its fundamental frequency. 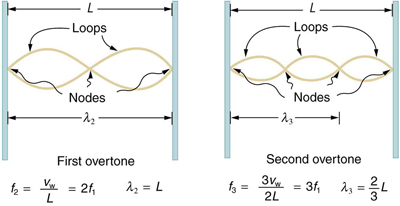 Striking two adjacent keys on a piano produces a warbling combination usually considered to be unpleasant. The superposition of two waves of similar but not identical frequencies is the culprit. Another example is often noticeable in jet aircraft, particularly the two-engine variety, while taxiing. The combined sound of the engines goes up and down in loudness. This varying loudness happens because the sound waves have similar but not identical frequencies. The discordant warbling of the piano and the fluctuating loudness of the jet engine noise are both due to alternately constructive and destructive interference as the two waves go in and out of phase. Figure 8 illustrates this graphically.

The wave resulting from the superposition of two similar-frequency waves has a frequency that is the average of the two. This wave fluctuates in amplitude, or beats, with a frequency called the beat frequency. We can determine the beat frequency by adding two waves together mathematically. Note that a wave can be represented at one point in space as
x=Xcos(T2πt​)=Xcos(2πft)
, where
f=T1​
is the frequency of the wave. Adding two waves that have different frequencies but identical amplitudes produces a resultant x = x1 + x2. More specifically, x = Xcos(2π f1t) + Xcos(2π f2t).

Using a trigonometric identity, it can be shown that x = 2X cos(π fBt)cos(2π favet), where fB = |f1 − f2| is the beat frequency, and fave is the average of f1 and f2. These results mean that the resultant wave has twice the amplitude and the average frequency of the two superimposed waves, but it also fluctuates in overall amplitude at the beat frequency fB. The first cosine term in the expression effectively causes the amplitude to go up and down. The second cosine term is the wave with frequency fave. This result is valid for all types of waves. However, if it is a sound wave, providing the two frequencies are similar, then what we hear is an average frequency that gets louder and softer (or warbles) at the beat frequency.

Piano tuners use beats routinely in their work. When comparing a note with a tuning fork, they listen for beats and adjust the string until the beats go away (to zero frequency). For example, if the tuning fork has a 256 Hz frequency and two beats per second are heard, then the other frequency is either 254 or 258 Hz. Most keys hit multiple strings, and these strings are actually adjusted until they have nearly the same frequency and give a slow beat for richness. Twelve-string guitars and mandolins are also tuned using beats.


While beats may sometimes be annoying in audible sounds, we will find that beats have many applications. Observing beats is a very useful way to compare similar frequencies. There are applications of beats as apparently disparate as in ultrasonic imaging and radar speed traps.

The rope would alternate between having waves with amplitudes two times the original amplitude and reaching equilibrium with no amplitude at all. The wavelengths will result in both constructive and destructive interference

You hook up a stereo system. When you test the system, you notice that in one corner of the room, the sounds seem dull. In another area, the sounds seem excessively loud. Describe how the sound moving about the room could result in these effects.

Make waves with a dripping faucet, audio speaker, or laser! Add a second source or a pair of slits to create an interference pattern. 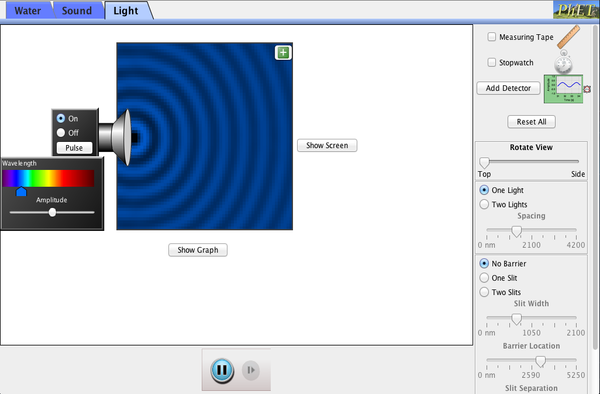 antinode: the location of maximum amplitude in standing waves

beat frequency: the frequency of the amplitude fluctuations of a wave

constructive interference: when two waves arrive at the same point exactly in phase; that is, the crests of the two waves are precisely aligned, as are the troughs

destructive interference: when two identical waves arrive at the same point exactly out of phase; that is, precisely aligned crest to trough

fundamental frequency: the lowest frequency of a periodic waveform

nodes: the points where the string does not move; more generally, nodes are where the wave disturbance is zero in a standing wave

overtones: multiples of the fundamental frequency of a sound

superposition: the phenomenon that occurs when two or more waves arrive at the same point