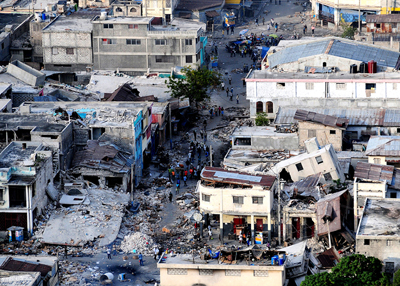 Figure 1. The destructive effect of an earthquake is palpable evidence of the energy carried in these waves. The Richter scale rating of earthquakes is related to both their amplitude and the energy they carry. (credit: Petty Officer 2nd Class Candice Villarreal, U.S. Navy)

All waves carry energy. The energy of some waves can be directly observed. Earthquakes can shake whole cities to the ground, performing the work of thousands of wrecking balls.

The amount of energy in a wave is related to its amplitude. Large-amplitude earthquakes produce large ground displacements. Loud sounds have higher pressure amplitudes and come from larger-amplitude source vibrations than soft sounds. Large ocean breakers churn up the shore more than small ones. More quantitatively, a wave is a displacement that is resisted by a restoring force. The larger the displacement x, the larger the force F = kx needed to create it. Because work W is related to force multiplied by distance (Fx) and energy is put into the wave by the work done to create it, the energy in a wave is related to amplitude. In fact, a wave’s energy is directly proportional to its amplitude squared because W ∝ Fx = kx2.

The energy effects of a wave depend on time as well as amplitude. For example, the longer deep-heat ultrasound is applied, the more energy it transfers. Waves can also be concentrated or spread out. Sunlight, for example, can be focused to burn wood. Earthquakes spread out, so they do less damage the farther they get from the source. In both cases, changing the area the waves cover has important effects. All these pertinent factors are included in the definition of intensity I as power per unit area:
I=AP​
, where P is the power carried by the wave through area A. The definition of intensity is valid for any energy in transit, including that carried by waves. The SI unit for intensity is watts per square meter (W/m2). For example, infrared and visible energy from the Sun impinge on Earth at an intensity of 1300 W/m2 just above the atmosphere. There are other intensity-related units in use, too. The most common is the decibel. For example, a 90 decibel sound level corresponds to an intensity of 10−3 W/m2. (This quantity is not much power per unit area considering that 90 decibels is a relatively high sound level. Decibels will be discussed in some detail in a later chapter.

Example 1. Calculating intensity and power: How much energy is in a ray of sunlight?

The average intensity of sunlight on Earth’s surface is about 500 W/m2.

Because power is energy per unit time or
P=tE​
, the definition of intensity can be written as


I=AP​=AtE​​
, and this equation can be solved for E with the given information.

Begin with the equation that states the definition of intensity:
I=AP​

Replace P with its equivalent
tE​
:

The energy falling on the solar collector in 4 h in part is enough to be useful—for example, for heating a significant amount of water.

Taking a ratio of new intensity to old intensity and using primes for the new quantities, we will find that it depends on the ratio of the areas. All other quantities will cancel.

Take the ratio of intensities, which yields:

Decreasing the area increases the intensity considerably. The intensity of the concentrated sunlight could even start a fire.

If two identical waves, each having an intensity of 1.00 W/m2, interfere perfectly constructively, what is the intensity of the resulting wave?

We know from Superposition and Interference that when two identical waves, which have equal amplitudes X, interfere perfectly constructively, the resulting wave has an amplitude of 2X. Because a wave’s intensity is proportional to amplitude squared, the intensity of the resulting wave is four times as great as in the individual waves.

Recall that intensity is proportional to amplitude squared.

Recall that the intensity of the old amplitude was I ∝ X 2 .

Take the ratio of new intensity to the old intensity. This gives
II′​=4
. 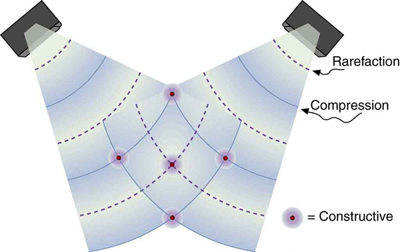 Which measurement of a wave is most important when determining the wave's intensity?

Amplitude, because a wave’s energy is directly proportional to its amplitude squared.

ME 163 •  University of California, Santa Barbara