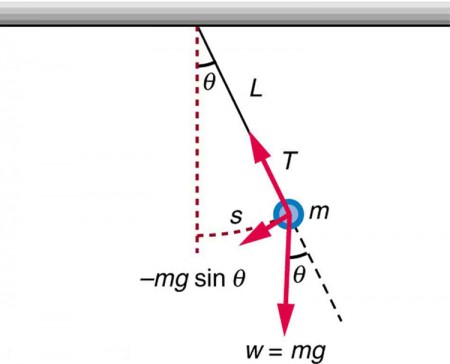 In Figure 1 we see that a simple pendulum has a small-diameter bob and a string that has a very small mass but is strong enough not to stretch appreciably. The linear displacement from equilibrium is s, the length of the arc. Also shown are the forces on the bob, which result in a net force of −mg sinθ toward the equilibrium position—that is, a restoring force.

Pendulums are in common usage. Some have crucial uses, such as in clocks; some are for fun, such as a child’s swing; and some are just there, such as the sinker on a fishing line. For small displacements, a pendulum is a simple harmonic oscillator. A simple pendulum is defined to have an object that has a small mass, also known as the pendulum bob, which is suspended from a light wire or string, such as shown in Figure 1. Exploring the simple pendulum a bit further, we can discover the conditions under which it performs simple harmonic motion, and we can derive an interesting expression for its period.

We begin by defining the displacement to be the arc length s. We see from Figure 1 that the net force on the bob is tangent to the arc and equals −mg sinθ. (The weight mg has components mg cosθ along the string and mg sinθ tangent to the arc.) Tension in the string exactly cancels the component mg cosθ parallel to the string. This leaves a net restoring force back toward the equilibrium position at θ = 0.

Now, if we can show that the restoring force is directly proportional to the displacement, then we have a simple harmonic oscillator. In trying to determine if we have a simple harmonic oscillator, we should note that for small angles (less than about 15º), sinθ ≈ θ (sinθ and θ differ by about 1% or less at smaller angles). Thus, for angles less than about 15º, the restoring force F is

The displacement s is directly proportional to θ. When θ is expressed in radians, the arc length in a circle is related to its radius (L in this instance) by s = Lθ, so that


θ=Ls​
. For small angles, then, the expression for the restoring force is:


F≈−Lmg​s
. This expression is of the form: F = −kx, where the force constant is given by
k=Lmg​
and the displacement is given by x = s. For angles less than about 15º, the restoring force is directly proportional to the displacement, and the simple pendulum is a simple harmonic oscillator.

Using this equation, we can find the period of a pendulum for amplitudes less than about 15º. For the simple pendulum:

Note the dependence of T on g. If the length of a pendulum is precisely known, it can actually be used to measure the acceleration due to gravity. Consider Example 1.

Example 1. Measuring Acceleration due to Gravity: The Period of a Pendulum

What is the acceleration due to gravity in a region where a simple pendulum having a length 75.000 cm has a period of 1.7357 s?

We are asked to find g given the period T and the length L of a pendulum. We can solve
T=2πgL​​
for g, assuming only that the angle of deflection is less than 15º.

Knowing g can be important in geological exploration; for example, a map of g over large geographical regions aids the study of plate tectonics and helps in the search for oil fields and large mineral deposits.

Use a simple pendulum to determine the acceleration due to gravity g in your own locale. Cut a piece of a string or dental floss so that it is about 1 m long. Attach a small object of high density to the end of the string (for example, a metal nut or a car key). Starting at an angle of less than 10º, allow the pendulum to swing and measure the pendulum’s period for 10 oscillations using a stopwatch. Calculate g. How accurate is this measurement? How might it be improved?

The movement of the pendula will not differ at all because the mass of the bob has no effect on the motion of a simple pendulum. The pendula are only affected by the period (which is related to the pendulum’s length) and by the acceleration due to gravity.

Play with one or two pendulums and discover how the period of a simple pendulum depends on the length of the string, the mass of the pendulum bob, and the amplitude of the swing. It’s easy to measure the period using the photogate timer. You can vary friction and the strength of gravity. Use the pendulum to find the value of g on planet X. Notice the anharmonic behavior at large amplitude. 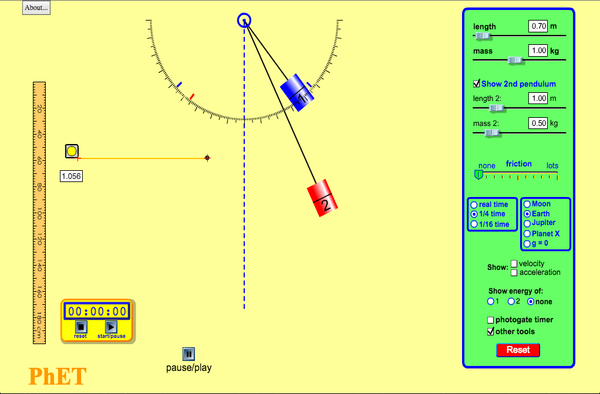 As usual, the acceleration due to gravity in these problems is taken to be g = 9.80 m/s2, unless otherwise specified.

simple pendulum: an object with a small mass suspended from a light wire or string