The Doppler effect is an alteration in the observed frequency of a sound due to motion of either the source or the observer. Although less familiar, this effect is easily noticed for a stationary source and moving observer. For example, if you ride a train past a stationary warning bell, you will hear the bell’s frequency shift from high to low as you pass by. The actual change in frequency due to relative motion of source and observer is called a Doppler shift. The Doppler effect and Doppler shift are named for the Austrian physicist and mathematician Christian Johann Doppler (1803–1853), who did experiments with both moving sources and moving observers. Doppler, for example, had musicians play on a moving open train car and also play standing next to the train tracks as a train passed by. Their music was observed both on and off the train, and changes in frequency were measured.

What causes the Doppler shift? Figure 1, Figure 2, and Figure 3 compare sound waves emitted by stationary and moving sources in a stationary air mass. Each disturbance spreads out spherically from the point where the sound was emitted. If the source is stationary, then all of the spheres representing the air compressions in the sound wave centered on the same point, and the stationary observers on either side see the same wavelength and frequency as emitted by the source, as in Figure 1. If the source is moving, as in Figure 2, then the situation is different. Each compression of the air moves out in a sphere from the point where it was emitted, but the point of emission moves. This moving emission point causes the air compressions to be closer together on one side and farther apart on the other. Thus, the wavelength is shorter in the direction the source is moving (on the right in Figure 2), and longer in the opposite direction (on the left in Figure 2). Finally, if the observers move, as in Figure 3, the frequency at which they receive the compressions changes. The observer moving toward the source receives them at a higher frequency, and the person moving away from the source receives them at a lower frequency. Figure 1. Sounds emitted by a source spread out in spherical waves. Because the source, observers, and air are stationary, the wavelength and frequency are the same in all directions and to all observers. 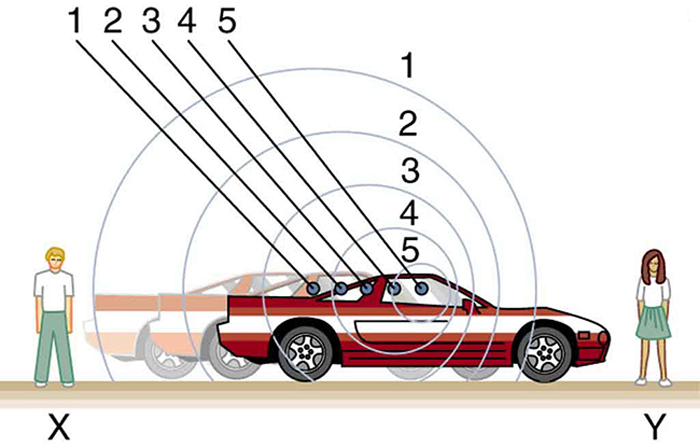 Figure 2. Sounds emitted by a source moving to the right spread out from the points at which they were emitted. The wavelength is reduced and, consequently, the frequency is increased in the direction of motion, so that the observer on the right hears a higher-pitch sound. The opposite is true for the observer on the left, where the wavelength is increased and the frequency is reduced. 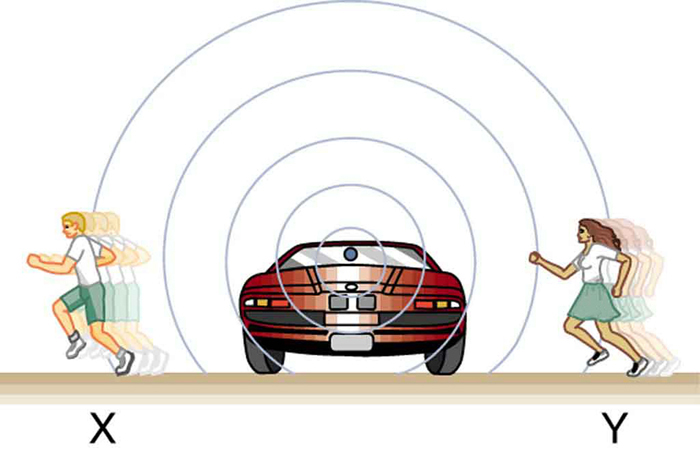 We know that wavelength and frequency are related by vw = fλ, where vw is the fixed speed of sound. The sound moves in a medium and has the same speed vw in that medium whether the source is moving or not. Thus f multiplied by λ is a constant. Because the observer on the right in Figure 2 receives a shorter wavelength, the frequency she receives must be higher. Similarly, the observer on the left receives a longer wavelength, and hence he hears a lower frequency. The same thing happens in Figure 3. A higher frequency is received by the observer moving toward the source, and a lower frequency is received by an observer moving away from the source. In general, then, relative motion of source and observer toward one another increases the received frequency. Relative motion apart decreases frequency. The greater the relative speed is, the greater the effect.

The Doppler effect occurs not only for sound but for any wave when there is relative motion between the observer and the source. There are Doppler shifts in the frequency of sound, light, and water waves, for example. Doppler shifts can be used to determine velocity, such as when ultrasound is reflected from blood in a medical diagnostic. The recession of galaxies is determined by the shift in the frequencies of light received from them and has implied much about the origins of the universe. Modern physics has been profoundly affected by observations of Doppler shifts.


For a stationary observer and a moving source, the frequency fobs received by the observer can be shown to be


fobs​=fs​(vw​vw​±vobs​​)
, where vobs is the speed of the observer along a line joining the source and observer. Here the plus sign is for motion toward the source, and the minus is for motion away from the source.

To find the observed frequency in Part 1,
fobs​=fs​(vw​±vs​vw​​)
, must be used because the source is moving. The minus sign is used for the approaching train, and the plus sign for the receding train. In Part 2, there are two Doppler shifts—one for a moving source and the other for a moving observer.

Use the same equation with the plus sign to find the frequency heard by a stationary person as the train recedes.

The numbers calculated are valid when the train is far enough away that the motion is nearly along the line joining train and observer. In both cases, the shift is significant and easily noticed. Note that the shift is 17.0 Hz for motion toward and 14.0 Hz for motion away. The shifts are not symmetric.

Use the following equation:


fobs​=[fs​(vw​vw​±vobs​​)](vw​±vs​vw​​)
The quantity in the square brackets is the Doppler-shifted frequency due to a moving observer. The factor on the right is the effect of the moving source.

Because the train engineer is moving in the direction toward the horn, we must use the plus sign for vobs; however, because the horn is also moving in the direction away from the engineer, we also use the plus sign for vs. But the train is carrying both the engineer and the horn at the same velocity, so vs = vobs. As a result, everything but fs cancels, yielding fobs = fs.

We may expect that there is no change in frequency when source and observer move together because it fits your experience. For example, there is no Doppler shift in the frequency of conversations between driver and passenger on a motorcycle. People talking when a wind moves the air between them also observe no Doppler shift in their conversation. The crucial point is that source and observer are not moving relative to each other.

What happens to the sound produced by a moving source, such as a jet airplane, that approaches or even exceeds the speed of sound? The answer to this question applies not only to sound but to all other waves as well. 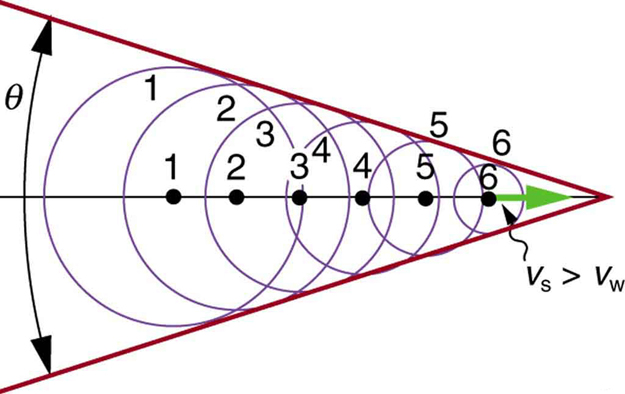 Figure 4. Sound waves from a source that moves faster than the speed of sound spread spherically from the point where they are emitted, but the source moves ahead of each. Constructive interference along the lines shown (actually a cone in three dimensions) creates a shock wave called a sonic boom. The faster the speed of the source, the smaller the angle θ. 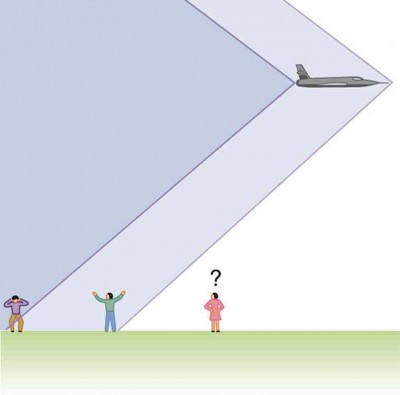 Figure 5. Two sonic booms, created by the nose and tail of an aircraft, are observed on the ground after the plane has passed by.

There is constructive interference along the lines shown (a cone in three dimensions) from similar sound waves arriving there simultaneously. This superposition forms a disturbance called a sonic boom, a constructive interference of sound created by an object moving faster than sound. Inside the cone, the interference is mostly destructive, and so the sound intensity there is much less than on the shock wave. An aircraft creates two sonic booms, one from its nose and one from its tail. (See Figure 5.) During television coverage of space shuttle landings, two distinct booms could often be heard. These were separated by exactly the time it would take the shuttle to pass by a point. Observers on the ground often do not see the aircraft creating the sonic boom, because it has passed by before the shock wave reaches them, as seen in Figure 5. If the aircraft flies close by at low altitude, pressures in the sonic boom can be destructive and break windows as well as rattle nerves. Because of how destructive sonic booms can be, supersonic flights are banned over populated areas of the United States. 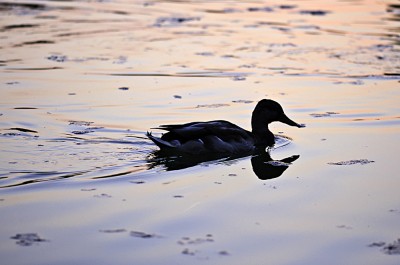 Figure 6. Bow wake created by a duck. Constructive interference produces the rather structured wake, while there is relatively little wave action inside the wake, where interference is mostly destructive. (credit: Horia Varlan, Flickr)

Sonic booms are one example of a broader phenomenon called bow wakes. A bow wake, such as the one in Figure 6, is created when the wave source moves faster than the wave propagation speed. Water waves spread out in circles from the point where created, and the bow wake is the familiar V-shaped wake trailing the source. A more exotic bow wake is created when a subatomic particle travels through a medium faster than the speed of light travels in that medium. (In a vacuum, the maximum speed of light will be c = 3.00 × 108 m/s; in the medium of water, the speed of light is closer to 0.75c. If the particle creates light in its passage, that light spreads on a cone with an angle indicative of the speed of the particle, as illustrated in Figure 7. Such a bow wake is called Cerenkov radiation and is commonly observed in particle physics. 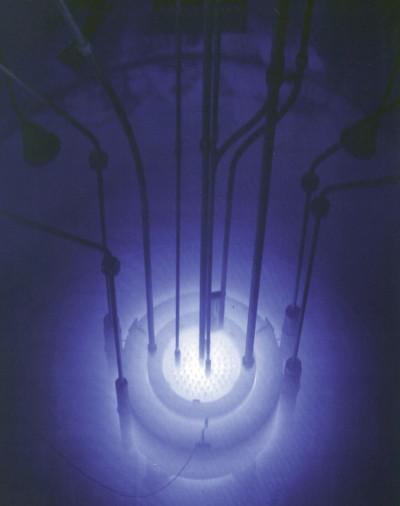 Figure 7. The blue glow in this research reactor pool is Cerenkov radiation caused by subatomic particles traveling faster than the speed of light in water. (credit: U.S. Nuclear Regulatory Commission)

Doppler shifts and sonic booms are interesting sound phenomena that occur in all types of waves. They can be of considerable use. For example, the Doppler shift in ultrasound can be used to measure blood velocity, while police use the Doppler shift in radar (a microwave) to measure car velocities. In meteorology, the Doppler shift is used to track the motion of storm clouds; such “Doppler Radar” can give velocity and direction and rain or snow potential of imposing weather fronts. In astronomy, we can examine the light emitted from distant galaxies and determine their speed relative to ours. As galaxies move away from us, their light is shifted to a lower frequency, and so to a longer wavelength—the so-called red shift. Such information from galaxies far, far away has allowed us to estimate the age of the universe (from the Big Bang) as about 14 billion years.

Why did scientist Christian Doppler observe musicians both on a moving train and also from a stationary point not on the train?

Describe a situation in your life when you might rely on the Doppler shift to help you either while driving a car or walking near traffic.

If I am driving and I hear Doppler shift in an ambulance siren, I would be able to tell when it was getting closer and also if it has passed by. This would help me to know whether I needed to pull over and let the ambulance through.

Doppler effect: an alteration in the observed frequency of a sound due to motion of either the source or the observer

Doppler shift: the actual change in frequency due to relative motion of source and observer

sonic boom: a constructive interference of sound created by an object moving faster than sound

Copy of 5 Doppler Effect and Other Wave Phenomena -2.pdf

HOW DID THE DOPPLER EFFECT WORK.docx