The Law of Refraction


It is easy to notice some odd things when looking into a fish tank. For example, you may see the same fish appearing to be in two different places. (See Figure 1.) This is because light coming from the fish to us changes direction when it leaves the tank, and in this case, it can travel two different paths to get to our eyes. The changing of a light ray’s direction (loosely called bending) when it passes through variations in matter is called refraction. Refraction is responsible for a tremendous range of optical phenomena, from the action of lenses to voice transmission through optical fibers.

The changing of a light ray’s direction (loosely called bending) when it passes through variations in matter is called refraction.

The speed of light c not only affects refraction, it is one of the central concepts of Einstein’s theory of relativity. As the accuracy of the measurements of the speed of light were improved, c was found not to depend on the velocity of the source or the observer. However, the speed of light does vary in a precise manner with the material it traverses. These facts have far-reaching implications, as we will see in the chapter Special Relativity. It makes connections between space and time and alters our expectations that all observers measure the same time for the same event, for example. The speed of light is so important that its value in a vacuum is one of the most fundamental constants in nature as well as being one of the four fundamental SI units. 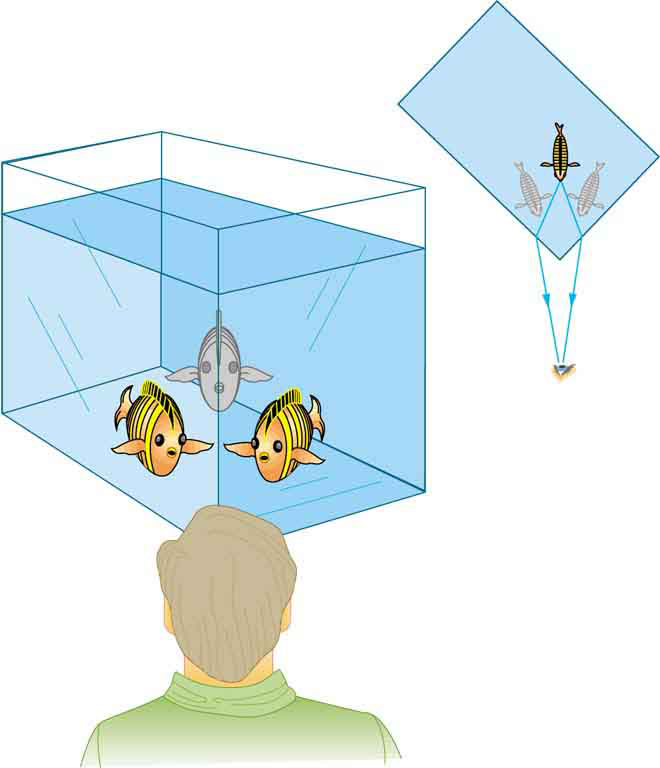 Figure 1. Looking at the fish tank as shown, we can see the same fish in two different locations, because light changes directions when it passes from water to air. In this case, the light can reach the observer by two different paths, and so the fish seems to be in two different places. This bending of light is called refraction and is responsible for many optical phenomena.

The Speed of Light

Early attempts to measure the speed of light, such as those made by Galileo, determined that light moved extremely fast, perhaps instantaneously. The first real evidence that light traveled at a finite speed came from the Danish astronomer Ole Roemer in the late 17th century. Roemer had noted that the average orbital period of one of Jupiter’s moons, as measured from Earth, varied depending on whether Earth was moving toward or away from Jupiter. He correctly concluded that the apparent change in period was due to the change in distance between Earth and Jupiter and the time it took light to travel this distance. From his 1676 data, a value of the speed of light was calculated to be 2.26 × 108 m/s (only 25% different from today’s accepted value). In more recent times, physicists have measured the speed of light in numerous ways and with increasing accuracy. One particularly direct method, used in 1887 by the American physicist Albert Michelson (1852–1931), is illustrated in Figure 2. Light reflected from a rotating set of mirrors was reflected from a stationary mirror 35 km away and returned to the rotating mirrors. The time for the light to travel can be determined by how fast the mirrors must rotate for the light to be returned to the observer’s eye. 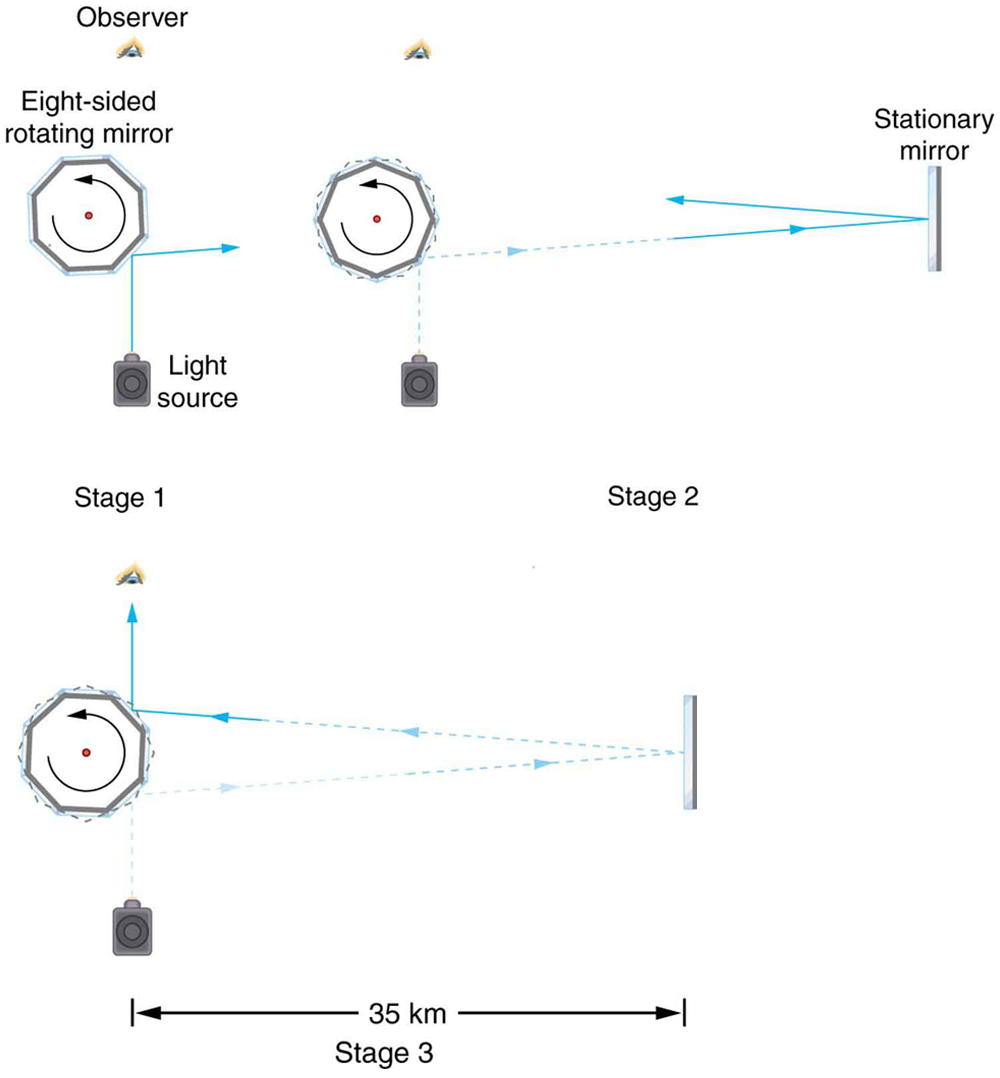 Figure 2. A schematic of early apparatus used by Michelson and others to determine the speed of light. As the mirrors rotate, the reflected ray is only briefly directed at the stationary mirror. The returning ray will be reflected into the observer's eye only if the next mirror has rotated into the correct position just as the ray returns. By measuring the correct rotation rate, the time for the round trip can be measured and the speed of light calculated. Michelson’s calculated value of the speed of light was only 0.04% different from the value used today.

Value of the Speed of Light

n=vc​
That is, n ≥ 1. Table 1 gives the indices of refraction for some representative substances. The values are listed for a particular wavelength of light, because they vary slightly with wavelength. (This can have important effects, such as colors produced by a prism.) Note that for gases, n is close to 1.0. This seems reasonable, since atoms in gases are widely separated and light travels at c in the vacuum between atoms. It is common to take n = 1 for gases unless great precision is needed. Although the speed of light v in a medium varies considerably from its value c in a vacuum, it is still a large speed.

Example 1. Speed of Light in Matter

Calculate the speed of light in zircon, a material used in jewelry to imitate diamond.

The speed of light in a material, v, can be calculated from the index of refraction n of the material using the equation
n=vc​
.

The equation for index of refraction states that
n=vc​
. Rearranging this to determine v gives
v=nc​
.

The index of refraction for zircon is given as 1.923 in Table 1, and c is given in the equation for speed of light. Entering these values in the last expression gives

This speed is slightly larger than half the speed of light in a vacuum and is still high compared with speeds we normally experience. The only substance listed in Table 1 that has a greater index of refraction than zircon is diamond. We shall see later that the large index of refraction for zircon makes it sparkle more than glass, but less than diamond.

Figure 3 shows how a ray of light changes direction when it passes from one medium to another. As before, the angles are measured relative to a perpendicular to the surface at the point where the light ray crosses it. (Some of the incident light will be reflected from the surface, but for now we will concentrate on the light that is transmitted.) The change in direction of the light ray depends on how the speed of light changes. The change in the speed of light is related to the indices of refraction of the media involved. In the situations shown in Figure 3, medium 2 has a greater index of refraction than medium 1. This means that the speed of light is less in medium 2 than in medium 1. Note that as shown in Figure 3a, the direction of the ray moves closer to the perpendicular when it slows down. Conversely, as shown in Figure 3b, the direction of the ray moves away from the perpendicular when it speeds up. The path is exactly reversible. In both cases, you can imagine what happens by thinking about pushing a lawn mower from a footpath onto grass, and vice versa. Going from the footpath to grass, the front wheels are slowed and pulled to the side as shown. This is the same change in direction as for light when it goes from a fast medium to a slow one. When going from the grass to the footpath, the front wheels can move faster and the mower changes direction as shown. This, too, is the same change in direction as for light going from slow to fast.

Here n1 and n2 are the indices of refraction for medium 1 and 2, and θ1 and θ2 are the angles between the rays and the perpendicular in medium 1 and 2, as shown in Figure 3. The incoming ray is called the incident ray and the outgoing ray the refracted ray, and the associated angles the incident angle and the refracted angle. The law of refraction is also called Snell’s law after the Dutch mathematician Willebrord Snell (1591–1626), who discovered it in 1621. Snell’s experiments showed that the law of refraction was obeyed and that a characteristic index of refraction n could be assigned to a given medium. Snell was not aware that the speed of light varied in different media, but through experiments he was able to determine indices of refraction from the way light rays changed direction.

The Law of Refraction

A classic observation of refraction occurs when a pencil is placed in a glass half filled with water. Do this and observe the shape of the pencil when you look at the pencil sideways, that is, through air, glass, water. Explain your observations. Draw ray diagrams for the situation.

Find the index of refraction for medium 2 in Figure 3a, assuming medium 1 is air and given the incident angle is 30.0º and the angle of refraction is 22.0º.

Example 3. A Larger Change in Direction

Suppose that in a situation like that in Example 2, light goes from air to diamond and that the incident angle is 30.0º. Calculate the angle of refraction θ2 in the diamond.

refraction: changing of a light ray’s direction when it passes through variations in matter

index of refraction: for a material, the ratio of the speed of light in vacuum to that in the material

15. (a)
5.00c​
; (b) Speed of light too slow, since index is much greater than that of diamond; (c) Angle of refraction is unreasonable relative to the angle of incidence.

Physics 11-03 The Laws of Reflection and Refraction