We only have to look as far as the nearest bathroom to find an example of an image formed by a mirror. Images in flat mirrors are the same size as the object and are located behind the mirror. Like lenses, mirrors can form a variety of images. For example, dental mirrors may produce a magnified image, just as makeup mirrors do. Security mirrors in shops, on the other hand, form images that are smaller than the object. We will use the law of reflection to understand how mirrors form images, and we will find that mirror images are analogous to those formed by lenses. 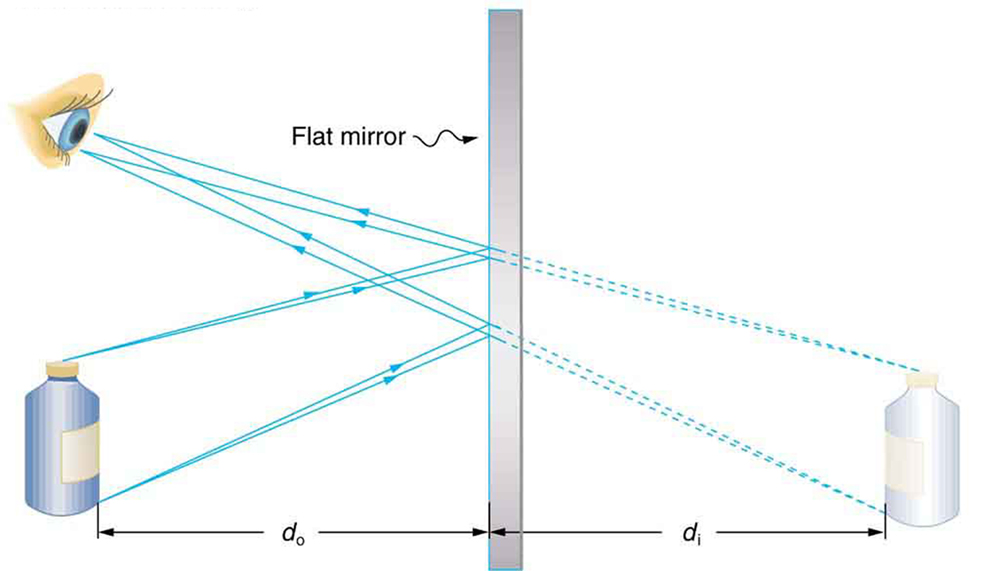 Figure 1. Two sets of rays from common points on an object are reflected by a flat mirror into the eye of an observer. The reflected rays seem to originate from behind the mirror, locating the virtual image.

Now let us consider the focal length of a mirror—for example, the concave spherical mirrors in Figure 2. Rays of light that strike the surface follow the law of reflection. For a mirror that is large compared with its radius of curvature, as in Figure 2a, we see that the reflected rays do not cross at the same point, and the mirror does not have a well-defined focal point. If the mirror had the shape of a parabola, the rays would all cross at a single point, and the mirror would have a well-defined focal point. But parabolic mirrors are much more expensive to make than spherical mirrors. The solution is to use a mirror that is small compared with its radius of curvature, as shown in Figure 2b. (This is the mirror equivalent of the thin lens approximation.) To a very good approximation, this mirror has a well-defined focal point at F that is the focal distance f from the center of the mirror. The focal length f of a concave mirror is positive, since it is a converging mirror.

The convex mirror shown in Figure 3 also has a focal point. Parallel rays of light reflected from the mirror seem to originate from the point F at the focal distance f behind the mirror. The focal length and power of a convex mirror are negative, since it is a diverging mirror. 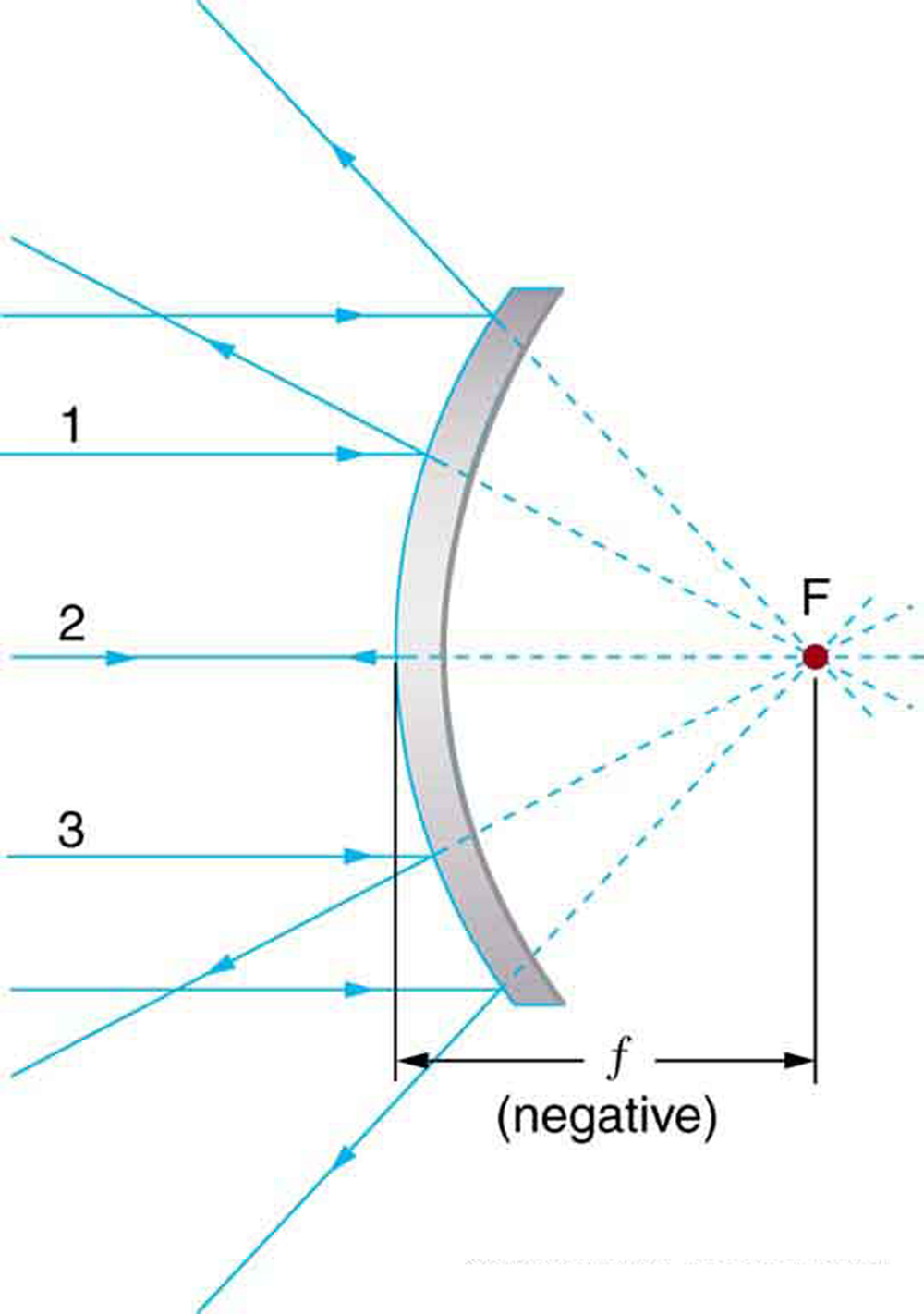 Figure 3. Parallel rays of light reflected from a convex spherical mirror (small in size compared with its radius of curvature) seem to originate from a well-defined focal point at the focal distance f behind the mirror. Convex mirrors diverge light rays and, thus, have a negative focal length.


We will use ray tracing to illustrate how images are formed by mirrors, and we can use ray tracing quantitatively to obtain numerical information. But since we assume each mirror is small compared with its radius of curvature, we can use the thin lens equations for mirrors just as we did for lenses.

Consider the situation shown in Figure 4, concave spherical mirror reflection, in which an object is placed farther from a concave (converging) mirror than its focal length. That is, f is positive and do > f, so that we may expect an image similar to the case 1 real image formed by a converging lens. Ray tracing in Figure 4 shows that the rays from a common point on the object all cross at a point on the same side of the mirror as the object. Thus a real image can be projected onto a screen placed at this location. The image distance is positive, and the image is inverted, so its magnification is negative. This is a case 1 image for mirrors. It differs from the case 1 image for lenses only in that the image is on the same side of the mirror as the object. It is otherwise identical. 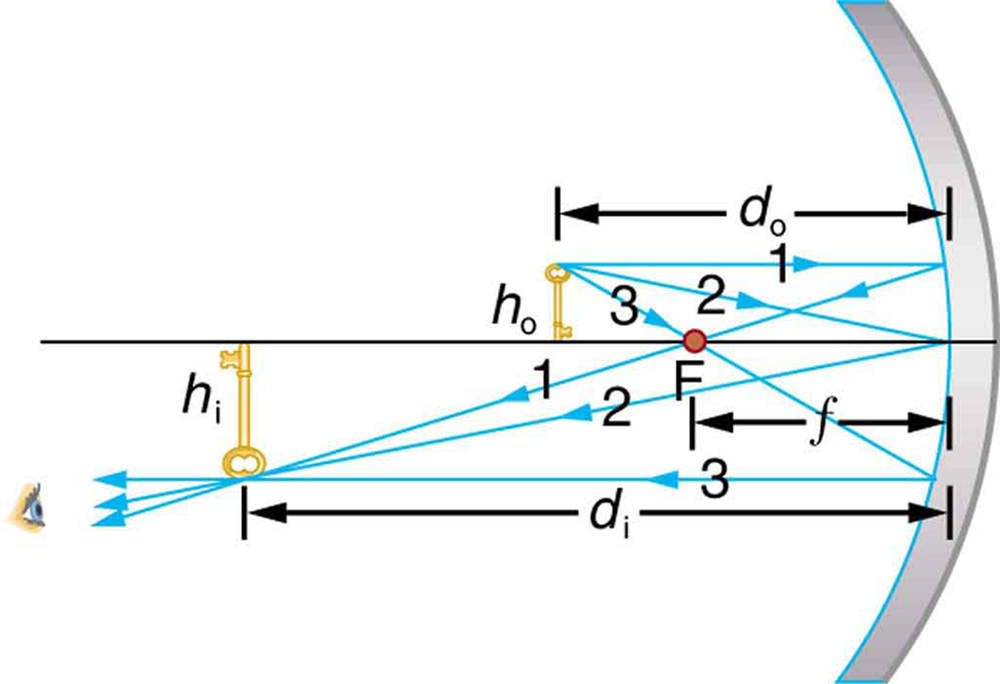 Figure 4. A case 1 image for a mirror. An object is farther from the converging mirror than its focal length. Rays from a common point on the object are traced using the rules in the text. Ray 1 approaches parallel to the axis, ray 2 strikes the center of the mirror, and ray 3 goes through the focal point on the way toward the mirror. All three rays cross at the same point after being reflected, locating the inverted real image. Although three rays are shown, only two of the three are needed to locate the image and determine its height.

Electric room heaters use a concave mirror to reflect infrared (IR) radiation from hot coils. Note that IR follows the same law of reflection as visible light. Given that the mirror has a radius of curvature of 50.0 cm and produces an image of the coils 3.00 m away from the mirror, where are the coils?

We are given that the concave mirror projects a real image of the coils at an image distance di=3.00 m. The coils are the object, and we are asked to find their location—that is, to find the object distance do. We are also given the radius of curvature of the mirror, so that its focal length is
f=2R​=25.0 cm
(positive since the mirror is concave or converging). Assuming the mirror is small compared with its radius of curvature, we can use the thin lens equations, to solve this problem.

Note that the object (the filament) is farther from the mirror than the mirror’s focal length. This is a case 1 image (do > f and f positive), consistent with the fact that a real image is formed. You will get the most concentrated thermal energy directly in front of the mirror and 3.00 m away from it. Generally, this is not desirable, since it could cause burns. Usually, you want the rays to emerge parallel, and this is accomplished by having the filament at the focal point of the mirror.

One of the solar technologies used today for generating electricity is a device (called a parabolic trough or concentrating collector) that concentrates the sunlight onto a blackened pipe that contains a fluid. This heated fluid is pumped to a heat exchanger, where its heat energy is transferred to another system that is used to generate steam—and so generate electricity through a conventional steam cycle. Figure 5 shows such a working system in southern California. Concave mirrors are used to concentrate the sunlight onto the pipe. The mirror has the approximate shape of a section of a cylinder. For the problem, assume that the mirror is exactly one-quarter of a full cylinder.

To solve an Integrated Concept Problem we must first identify the physical principles involved. Part 1 is related to the current topic. Part 2 involves a little math, primarily geometry. Part 3 requires an understanding of heat and density.

To a good approximation for a concave or semi-spherical surface, the point where the parallel rays from the sun converge will be at the focal point, so R = 2f = 80.0 cm.

The increase in temperature is given by Q = mcΔT. The mass m of the mineral oil in the one-meter section of pipe is 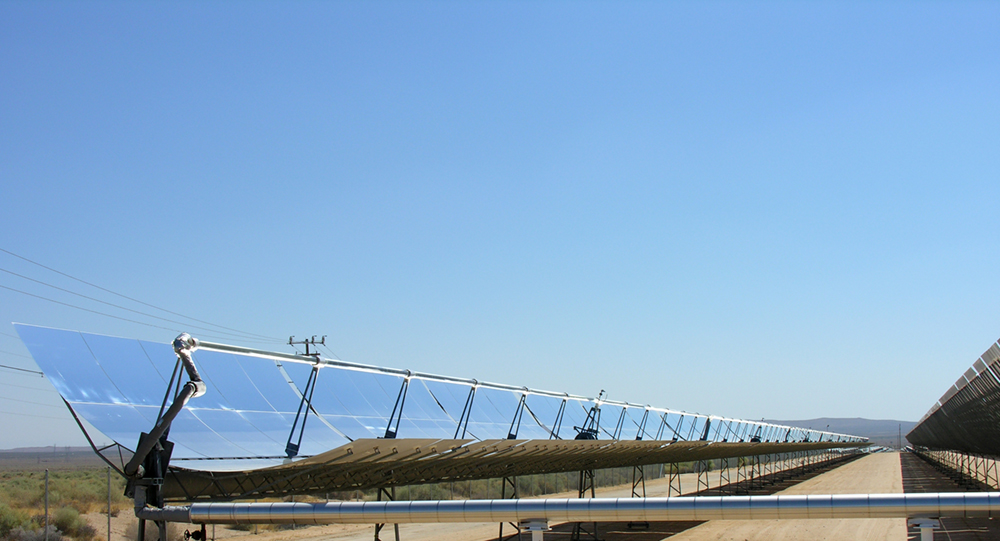 An array of such pipes in the California desert can provide a thermal output of 250 MW on a sunny day, with fluids reaching temperatures as high as 400ºC. We are considering only one meter of pipe here, and ignoring heat losses along the pipe.

What happens if an object is closer to a concave mirror than its focal length? This is analogous to a case 2 image for lenses ( do <f and f positive), which is a magnifier. In fact, this is how makeup mirrors act as magnifiers. Figure 6a uses ray tracing to locate the image of an object placed close to a concave mirror. Rays from a common point on the object are reflected in such a manner that they appear to be coming from behind the mirror, meaning that the image is virtual and cannot be projected. As with a magnifying glass, the image is upright and larger than the object. This is a case 2 image for mirrors and is exactly analogous to that for lenses.

Figure 6. (a) Case 2 images for mirrors are formed when a converging mirror has an object closer to it than its focal length. Ray 1 approaches parallel to the axis, ray 2 strikes the center of the mirror, and ray 3 approaches the mirror as if it came from the focal point. (b) A magnifying mirror showing the reflection. (credit: Mike Melrose, Flickr)

All three rays appear to originate from the same point after being reflected, locating the upright virtual image behind the mirror and showing it to be larger than the object. (b) Makeup mirrors are perhaps the most common use of a concave mirror to produce a larger, upright image.

A convex mirror is a diverging mirror (f is negative) and forms only one type of image. It is a case 3 image—one that is upright and smaller than the object, just as for diverging lenses. Figure 7a uses ray tracing to illustrate the location and size of the case 3 image for mirrors. Since the image is behind the mirror, it cannot be projected and is thus a virtual image. It is also seen to be smaller than the object.

Figure 7. Case 3 images for mirrors are formed by any convex mirror. Ray 1 approaches parallel to the axis, ray 2 strikes the center of the mirror, and ray 3 approaches toward the focal point. All three rays appear to originate from the same point after being reflected, locating the upright virtual image behind the mirror and showing it to be smaller than the object. (b) Security mirrors are convex, producing a smaller, upright image. Because the image is smaller, a larger area is imaged compared to what would be observed for a flat mirror (and hence security is improved). (credit: Laura D’Alessandro, Flickr)

Example 3. Image in a Convex Mirror

Although the focal length f of a convex mirror is defined to be negative, we take the absolute value to give us a positive value for R. The radius of curvature found here is reasonable for a cornea. The distance from cornea to retina in an adult eye is about 2.0 cm. In practice, many corneas are not spherical, complicating the job of fitting contact lenses. Note that the image distance here is negative, consistent with the fact that the image is behind the mirror, where it cannot be projected. In this section’s Problems and Exercises, you will show that for a fixed object distance, the smaller the radius of curvature, the smaller the magnification.

Step 1. Examine the situation to determine that image formation by a mirror is involved.

Step 2. Refer to the Problem-Solving Strategies for Lenses. The same strategies are valid for mirrors as for lenses with one qualification—use the ray tracing rules for mirrors listed earlier in this section.

converging mirror: a concave mirror in which light rays that strike it parallel to its axis converge at one or more points along the axis

diverging mirror: a convex mirror in which light rays that strike it parallel to its axis bend away (diverge) from its axis

Reflection and image formation by mirrors.pdf