The quantum of EM radiation we call a photon has properties analogous to those of particles we can see, such as grains of sand. A photon interacts as a unit in collisions or when absorbed, rather than as an extensive wave. Massive quanta, like electrons, also act like macroscopic particles—something we expect, because they are the smallest units of matter. Particles carry momentum as well as energy. Despite photons having no mass, there has long been evidence that EM radiation carries momentum. (Maxwell and others who studied EM waves predicted that they would carry momentum.) It is now a well-established fact that photons do have momentum. In fact, photon momentum is suggested by the photoelectric effect, where photons knock electrons out of a substance. Figure 1 shows macroscopic evidence of photon momentum.

Figure 1. The tails of the Hale-Bopp comet point away from the Sun, evidence that light has momentum. Dust emanating from the body of the comet forms this tail. Particles of dust are pushed away from the Sun by light reflecting from them. The blue ionized gas tail is also produced by photons interacting with atoms in the comet material. (credit: Geoff Chester, U.S. Navy, via Wikimedia Commons)

Figure 1 shows a comet with two prominent tails. What most people do not know about the tails is that they always point away from the Sun rather than trailing behind the comet (like the tail of Bo Peep’s sheep). Comet tails are composed of gases and dust evaporated from the body of the comet and ionized gas. The dust particles recoil away from the Sun when photons scatter from them. Evidently, photons carry momentum in the direction of their motion (away from the Sun), and some of this momentum is transferred to dust particles in collisions. Gas atoms and molecules in the blue tail are most affected by other particles of radiation, such as protons and electrons emanating from the Sun, rather than by the momentum of photons. 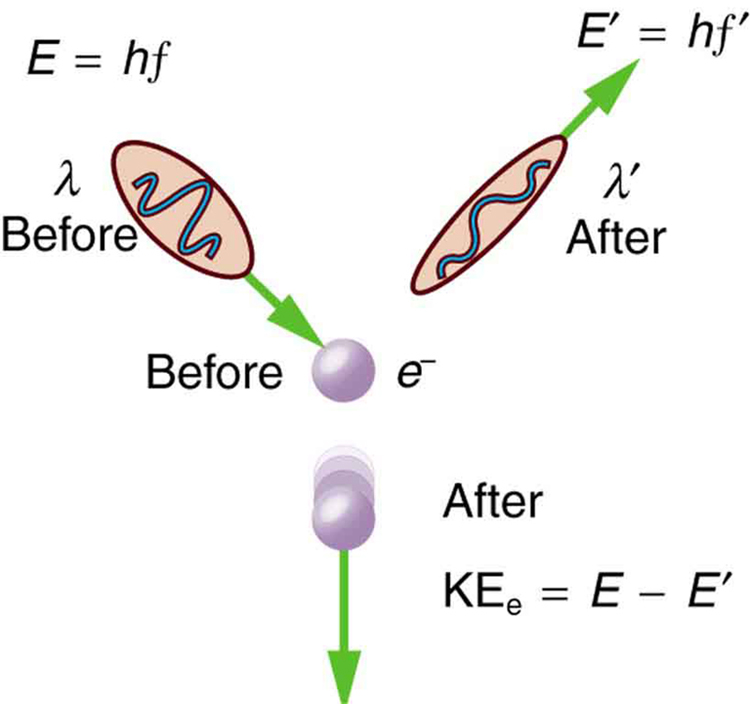 Figure 2. The Compton effect is the name given to the scattering of a photon by an electron. Energy and momentum are conserved, resulting in a reduction of both for the scattered photon. Studying this effect, Compton verified that photons have momentum.

Momentum is conserved in quantum mechanics just as it is in relativity and classical physics. Some of the earliest direct experimental evidence of this came from scattering of x-ray photons by electrons in substances, named Compton scattering after the American physicist Arthur H. Compton (1892–1962). Around 1923, Compton observed that x rays scattered from materials had a decreased energy and correctly analyzed this as being due to the scattering of photons from electrons. This phenomenon could be handled as a collision between two particles—a photon and an electron at rest in the material. Energy and momentum are conserved in the collision. (See Figure 2) He won a Nobel Prize in 1929 for the discovery of this scattering, now called the Compton effect, because it helped prove that photon momentum is given by
p=λh​
, where h is Planck’s constant and λ is the photon wavelength. (Note that relativistic momentum given as p = γmu is valid only for particles having mass.)

We can see that photon momentum is small, since
p=λh​
and h is very small. It is for this reason that we do not ordinarily observe photon momentum. Our mirrors do not recoil when light reflects from them (except perhaps in cartoons). Compton saw the effects of photon momentum because he was observing x rays, which have a small wavelength and a relatively large momentum, interacting with the lightest of particles, the electron.

Photon momentum is given by the equation:
p=λh​
.

Entering the given photon wavelength yields

The electron has kinetic energy, which is classically given by
KEe​=21​mv2
.

The photon energy E is

Photon momentum is indeed small. Even if we have huge numbers of them, the total momentum they carry is small. An electron with the same momentum has a 1460 m/s velocity, which is clearly nonrelativistic. A more massive particle with the same momentum would have an even smaller velocity. This is borne out by the fact that it takes far less energy to give an electron the same momentum as a photon. But on a quantum-mechanical scale, especially for high-energy photons interacting with small masses, photon momentum is significant. Even on a large scale, photon momentum can have an effect if there are enough of them and if there is nothing to prevent the slow recoil of matter. Comet tails are one example, but there are also proposals to build space sails that use huge low-mass mirrors (made of aluminized Mylar) to reflect sunlight. In the vacuum of space, the mirrors would gradually recoil and could actually take spacecraft from place to place in the solar system. (See Figure 3.)

Figure 3. (a) Space sails have been proposed that use the momentum of sunlight reflecting from gigantic low-mass sails to propel spacecraft about the solar system. A Russian test model of this (the Cosmos 1) was launched in 2005, but did not make it into orbit due to a rocket failure. (b) A U.S. version of this, labeled LightSail-1, is scheduled for trial launches in the first part of this decade. It will have a 40-m2 sail. (credit: Kim Newton/NASA)

There is a relationship between photon momentum p and photon energy E that is consistent with the relation given previously for the relativistic total energy of a particle as E2 = (pc)2 + (mc)2. We know m is zero for a photon, but p is not, so that E2 = (pc)2 + (mc)2 becomes E = pc, or
p=cE​
(photons).

To check the validity of this relation, note that
E=λhc​
for a photon. Substituting this into
p=cE​
yields


p=cλhc​​=λh​
, as determined experimentally and discussed above. Thus, p=E/c is equivalent to Compton’s result p=h/λ. For a further verification of the relationship between photon energy and momentum, see Example 2.

Almost all detection systems talked about thus far—eyes, photographic plates, photomultiplier tubes in microscopes, and CCD cameras—rely on particle-like properties of photons interacting with a sensitive area. A change is caused and either the change is cascaded or zillions of points are recorded to form an image we detect. These detectors are used in biomedical imaging systems, and there is ongoing research into improving the efficiency of receiving photons, particularly by cooling detection systems and reducing thermal effects.

Show that
p=cE​
for the photon considered in the Example 1.

We will take the energy E found in Example 1, divide it by the speed of light, and see if the same momentum is obtained as before.

Given that the energy of the photon is 2.48 eV and converting this to joules, we get

This value for momentum is the same as found before (note that unrounded values are used in all calculations to avoid even small rounding errors), an expected verification of the relationship
p=cE​
. This also means the relationship between energy, momentum, and mass given by E2 = (pc)2 + (mc)2 applies to both matter and photons. Once again, note that p is not zero, even when m is.

photon momentum: the amount of momentum a photon has, calculated by
p=λh​=cE​


PE​=γmuγmc2​=uc2​
As the mass of particle approaches zero, its velocity u will approach
c
, so that the ratio of energy to momentum in this limit is


m→0lim​PE​=cc2​=c
which is consistent with the equation for photon energy.

2011 A Afanasev OAM in helical Undulator.pdf