A host of medical imaging techniques employ nuclear radiation. What makes nuclear radiation so useful? First, γ radiation can easily penetrate tissue; hence, it is a useful probe to monitor conditions inside the body. Second, nuclear radiation depends on the nuclide and not on the chemical compound it is in, so that a radioactive nuclide can be put into a compound designed for specific purposes. The compound is said to be tagged. A tagged compound used for medical purposes is called a radiopharmaceutical. Radiation detectors external to the body can determine the location and concentration of a radiopharmaceutical to yield medically useful information. For example, certain drugs are concentrated in inflamed regions of the body, and this information can aid diagnosis and treatment as seen in Figure 1. Another application utilizes a radiopharmaceutical which the body sends to bone cells, particularly those that are most active, to detect cancerous tumors or healing points. Images can then be produced of such bone scans. Radioisotopes are also used to determine the functioning of body organs, such as blood flow, heart muscle activity, and iodine uptake in the thyroid gland. 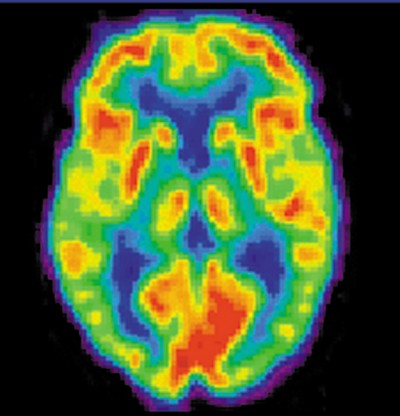 Figure 1. A radiopharmaceutical is used to produce this brain image of a patient with Alzheimer’s disease. Certain features are computer enhanced. (credit: National Institutes of Health)

Table 1 lists certain medical diagnostic uses of radiopharmaceuticals, including isotopes and activities that are typically administered. Many organs can be imaged with a variety of nuclear isotopes replacing a stable element by a radioactive isotope. One common diagnostic employs iodine to image the thyroid, since iodine is concentrated in that organ. The most active thyroid cells, including cancerous cells, concentrate the most iodine and, therefore, emit the most radiation. Conversely, hypothyroidism is indicated by lack of iodine uptake. Note that there is more than one isotope that can be used for several types of scans. Another common nuclear diagnostic is the thallium scan for the cardiovascular system, particularly used to evaluate blockages in the coronary arteries and examine heart activity. The salt TlCl can be used, because it acts like NaCl and follows the blood. Gallium-67 accumulates where there is rapid cell growth, such as in tumors and sites of infection. Hence, it is useful in cancer imaging. Usually, the patient receives the injection one day and has a whole body scan 3 or 4 days later because it can take several days for the gallium to build up.

Note that Table 1 lists many diagnostic uses for 99mTc, where “m” stands for a metastable state of the technetium nucleus. Perhaps 80 percent of all radiopharmaceutical procedures employ 99mTc because of its many advantages. One is that the decay of its metastable state produces a single, easily identified 0.142-MeV γ ray. Additionally, the radiation dose to the patient is limited by the short 6.0-h half-life of 99mTc. And, although its half-life is short, it is easily and continuously produced on site. The basic process for production is neutron activation of molybdenum, which quickly β decays into 99mTc. Technetium-99m can be attached to many compounds to allow the imaging of the skeleton, heart, lungs, kidneys, etc.

Figure 2 shows one of the simpler methods of imaging the concentration of nuclear activity, employing a device called an Anger camera or gamma camera. A piece of lead with holes bored through it collimates γ rays emerging from the patient, allowing detectors to receive γ rays from specific directions only. The computer analysis of detector signals produces an image. One of the disadvantages of this detection method is that there is no depth information (i.e., it provides a two-dimensional view of the tumor as opposed to a three-dimensional view), because radiation from any location under that detector produces a signal. 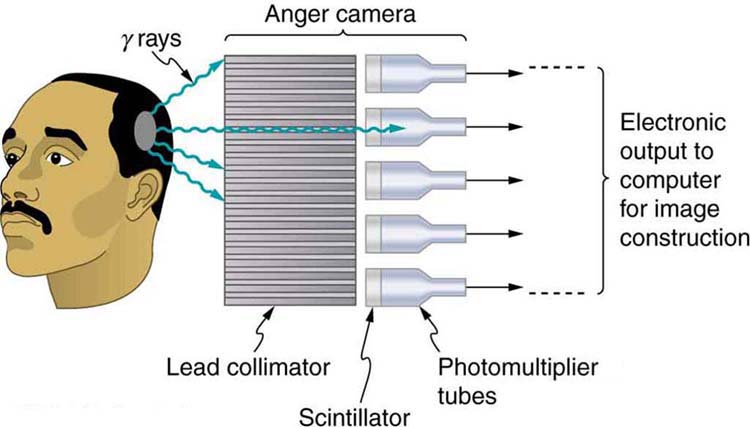 Figure 2. An Anger or gamma camera consists of a lead collimator and an array of detectors. Gamma rays produce light flashes in the scintillators. The light output is converted to an electrical signal by the photomultipliers. A computer constructs an image from the detector output.

Imaging techniques much like those in x-ray computed tomography (CT) scans use nuclear activity in patients to form three-dimensional images. Figure 3 shows a patient in a circular array of detectors that may be stationary or rotated, with detector output used by a computer to construct a detailed image. This technique is called single-photon-emission computed tomography (SPECT) or sometimes simply SPET. The spatial resolution of this technique is poor, about 1 cm, but the contrast (i.e. the difference in visual properties that makes an object distinguishable from other objects and the background) is good. 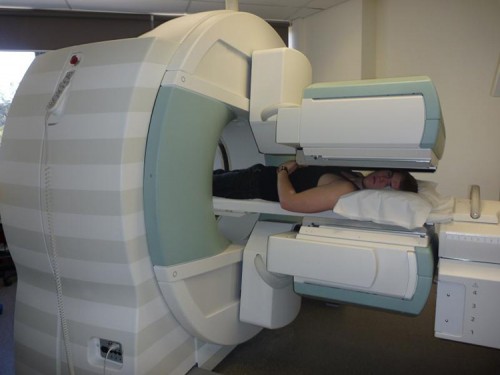 Figure 3. SPECT uses a geometry similar to a CT scanner to form an image of the concentration of a radiopharmaceutical compound. (credit: Woldo, Wikimedia Commons)

Images produced by β+ emitters have become important in recent years. When the emitted positron ( β+) encounters an electron, mutual annihilation occurs, producing two γ rays. These γ rays have identical 0.511-MeV energies (the energy comes from the destruction of an electron or positron mass) and they move directly away from one another, allowing detectors to determine their point of origin accurately, as shown in Figure 4. The system is called positron emission tomography (PET). It requires detectors on opposite sides to simultaneously (i.e., at the same time) detect photons of 0.511-MeV energy and utilizes computer imaging techniques similar to those in SPECT and CT scans. Examples of β+ -emitting isotopes used in PET are 11C, 13N, 15O, and 18F, as seen in Table 1. This list includes C, N, and O, and so they have the advantage of being able to function as tags for natural body compounds. Its resolution of 0.5 cm is better than that of SPECT; the accuracy and sensitivity of PET scans make them useful for examining the brain’s anatomy and function. The brain’s use of oxygen and water can be monitored with 15O. PET is used extensively for diagnosing brain disorders. It can note decreased metabolism in certain regions prior to a confirmation of Alzheimer’s disease. PET can locate regions in the brain that become active when a person carries out specific activities, such as speaking, closing their eyes, and so on. 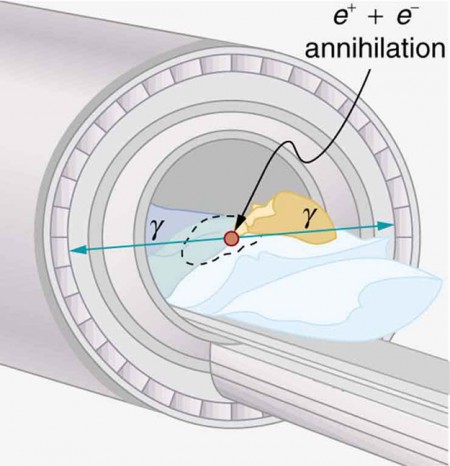 Figure 4. A PET system takes advantage of the two identical γ-ray photons produced by positron-electron annihilation. These γ rays are emitted in opposite directions, so that the line along which each pair is emitted is determined. Various events detected by several pairs of detectors are then analyzed by the computer to form an accurate image.

Is it a tumor? Magnetic Resonance Imaging (MRI) can tell. Your head is full of tiny radio transmitters (the nuclear spins of the hydrogen nuclei of your water molecules). In an MRI unit, these little radios can be made to broadcast their positions, giving a detailed picture of the inside of your head. 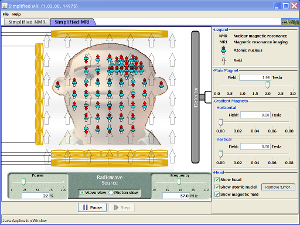 1. A neutron generator uses an α source, such as radium, to bombard beryllium, inducing the reaction 4He + 9Be → 12C + n. Such neutron sources are called RaBe sources, or PuBe sources if they use plutonium to get the α s. Calculate the energy output of the reaction in MeV.

3. The purpose of producing 99Mo (usually by neutron activation of natural molybdenum, as in the preceding problem) is to produce 99mTc. Using the rules, verify that the β−decay of 99Mo produces 99mTc. (Most 99mTc nuclei produced in this decay are left in a metastable excited state denoted 99mTc.)

4. (a) Two annihilation γ rays in a PET scan originate at the same point and travel to detectors on either side of the patient. If the point of origin is 9.00 cm closer to one of the detectors, what is the difference in arrival times of the photons? (This could be used to give position information, but the time difference is small enough to make it difficult.) (b) How accurately would you need to be able to measure arrival time differences to get a position resolution of 1.00 mm?

6. The activities of 131I and 123I used in thyroid scans are given in Table 1 to be 50 and 70 μCi, respectively. Find and compare the masses of 131I and 123I in such scans, given their respective half-lives are 8.04 d and 13.2 h. The masses are so small that the radioiodine is usually mixed with stable iodine as a carrier to ensure normal chemistry and distribution in the body.

Anger camera:
a common medical imaging device that uses a scintillator connected to a series of photomultipliers

gamma camera:
another name for an Anger camera

tagged:
process of attaching a radioactive substance to a chemical compound

0_Medical Physics as a carrier_fall15.ppt