The effect of a force on an object depends on how long it acts, as well as how great the force is. In Example 1 in Linear Momentum and Force, a very large force acting for a short time had a great effect on the momentum of the tennis ball. A small force could cause the same change in momentum, but it would have to act for a much longer time. For example, if the ball were thrown upward, the gravitational force (which is much smaller than the tennis racquet’s force) would eventually reverse the momentum of the ball. Quantitatively, the effect we are talking about is the change in momentum Δp.

Change in momentum equals the average net external force multiplied by the time this force acts.

The quantity FnetΔt is given the name impulse.

There are many ways in which an understanding of impulse can save lives, or at least limbs. The dashboard padding in a car, and certainly the airbags, allow the net force on the occupants in the car to act over a much longer time when there is a sudden stop. The momentum change is the same for an occupant, whether an air bag is deployed or not, but the force (to bring the occupant to a stop) will be much less if it acts over a larger time. Cars today have many plastic components. One advantage of plastics is their lighter weight, which results in better gas mileage. Another advantage is that a car will crumple in a collision, especially in the event of a head-on collision. A longer collision time means the force on the car will be less. Deaths during car races decreased dramatically when the rigid frames of racing cars were replaced with parts that could crumple or collapse in the event of an accident.

Bones in a body will fracture if the force on them is too large. If you jump onto the floor from a table, the force on your legs can be immense if you land stiff-legged on a hard surface. Rolling on the ground after jumping from the table, or landing with a parachute, extends the time over which the force (on you from the ground) acts.

The first ball bounces directly into the wall and exerts a force on it in the +x direction. Therefore the wall exerts a force on the ball in the −x direction. The second ball continues with the same momentum component in the y direction, but reverses its x-component of momentum, as seen by sketching a diagram of the angles involved and keeping in mind the proportionality between velocity and momentum.

Calculate the change in momentum for each ball, which is equal to the impulse imparted to the ball.

Let u be the speed of each ball before and after collision with the wall, and m the mass of each ball. Choose the x-axis and y-axis as previously described, and consider the change in momentum of the first ball which strikes perpendicular to the wall.

Now consider the change in momentum of the second ball.


Our definition of impulse includes an assumption that the force is constant over the time interval Δt. Forces are usually not constant. Forces vary considerably even during the brief time intervals considered. It is, however, possible to find an average effective force Feff that produces the same result as the corresponding time-varying force. Figure 1 shows a graph of what an actual force looks like as a function of time for a ball bouncing off the floor. The area under the curve has units of momentum and is equal to the impulse or change in momentum between times t1 and t2. That area is equal to the area inside the rectangle bounded by Feff, t1, and t2. Thus the impulses and their effects are the same for both the actual and effective forces. 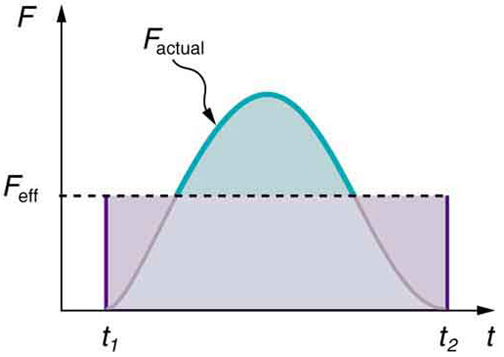 Figure 1. A graph of force versus time with time along the x-axis and force along the y-axis for an actual force and an equivalent effective force. The areas under the two curves are equal.

Try catching a ball while “giving” with the ball, pulling your hands toward your body. Then, try catching a ball while keeping your hands still. Hit water in a tub with your full palm. After the water has settled, hit the water again by diving your hand with your fingers first into the water. (Your full palm represents a swimmer doing a belly flop and your diving hand represents a swimmer doing a dive.) Explain what happens in each case and why. Which orientations would you advise people to avoid and why?

change in momentum: the difference between the final and initial momentum; the mass times the change in velocity

impulse: the average net external force times the time it acts; equal to the change in momentum

3. (a) 2.40 × 103 N toward the leg; (b) The force on each hand would have the same magnitude as that found in part (a) (but in opposite directions by Newton’s third law) because the change in momentum and the time interval are the same.

ENGINEER 1B •  Universal College of Paranaque

PHYS 53 •  University of the Pacific, Stockton