So: You are at the end of your speech, and you can’t wait to sit down and be done! You start speeding up your rate of delivery, but your volume goes down a bit because you are rushing and running out of breath. You finish the last main point of your speech and race off to your seat: That is not the best way to conclude a speech. 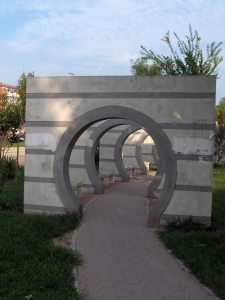 The basic structure of a speech is not linear but circular. Speeches should not take you on a straight line from A to Z. Speeches should take you in a circle from A to Z. Speeches start at the top of the circle with the introduction, work their way all around the circle, and end up back at the top with the conclusion. All the parts fit together and flow together in this circle, and the conclusion takes you right back to the introduction—with an enhanced understanding of the topic.

Prepare the Audience for the End of the Speech 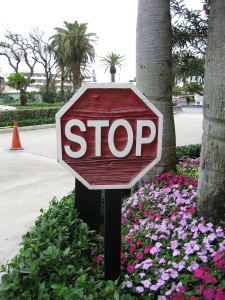 A speech does not just stop—or, to be more precise, a speech should not just stop. A speech, effectively structured and delivered, should move smoothly from point to point and then to the conclusion. One of the most important functions of the conclusion is to prepare the audience for the end of the speech.

Throughout the speech, you have been providing the audience with verbal and nonverbal cues to where you are going in the speech. As you move to the conclusion, you need to continue to provide these cues. You can use language cues (“now that we have seen that we can solve this problem effectively, we can review the entire situation”), movement cues (physically moving back to the center of the room where you began the speech), and paralinguistic cues (slow the rate of the speech, use more pauses) to help prepare your audience for the end of the speech.

When you prepare the audience for the end of the speech, you let them know that they need to be ready for any final comments or appeals from you, and that they should be prepared to acknowledge you as a speaker.

Psychologists and sociologists (as well as communication scholars) know that there is both a primacy and recency effect in presenting information.[4] Essentially, people tend to better remember information presented first or last—they remember what they hear at the beginning of the speech or at the end. In presenting your appeals to the audience, you can take advantage of the recency effect to increase the likelihood of your audience acting on your appeals. 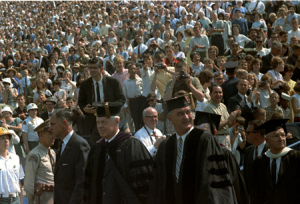 "LBJ at the University of Michigan" by Cecil W. Stoughton. Public domain.

Former President Lyndon Johnson, in a speech announcing a major policy initiative known as the Great Society, concluded his speech with a series of challenges and appeals to his audience.

For better or for worse, your generation has been appointed by history to deal with those problems and to lead America toward a new age. You have the chance never before afforded to any people in any age. You can help build a society where the demands of morality, and the needs of the spirit, can be realized in the life of the Nation.

So, will you join in the battle to give every citizen the full equality which God enjoins and the law requires, whatever his belief, or race, or the color of his skin?

Will you join in the battle to give every citizen an escape from the crushing weight of poverty?

Will you join in the battle to make it possible for all nations to live in enduring peace — as neighbors and not as mortal enemies?

Will you join in the battle to build the Great Society, to prove that our material progress is only the foundation on which we will build a richer life of mind and spirit?

There are those timid souls that say this battle cannot be won; that we are condemned to a soulless wealth. I do not agree. We have the power to shape the civilization that we want. But we need your will and your labor and your hearts, if we are to build that kind of society.[5] 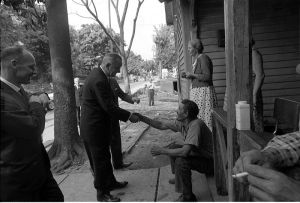 The appeals were significant in that the speech was delivered as a commencement address at the University of Michigan, at a time in American society when college and university students were protesting many government actions.

Let’s go back to the thesis and preview example. The example was from a speech on ethanol, and the sample thesis was “So right now let’s see how dependence on fossil fuels costs you money and how use of ethanol as a supplement will save you money and save the world from energy obsolescence.”

In the conclusion of this speech, one effective method to summarize and wrap-up is to simply restate the thesis and preview—but in the past tense, since we have now heard the speech.

Today we have seen how dependence on fossil fuels costs you money and how use of ethanol as a supplement will save you money and save the world from energy obsolescence. We learned first why we as a society are so dependent upon fossil fuels in the first place, and then secondly we found out what causes this dependence, and third, we saw how ethanol as a fuel supplement will help end this dependence, and finally we discovered how simple it is to implement this solution and make the world a better place for all of us.

By restating the thesis and reviewing the main ideas, you once again take advantage of both the primacy and recency effect, and you create a complete and coherent structure to your speech. 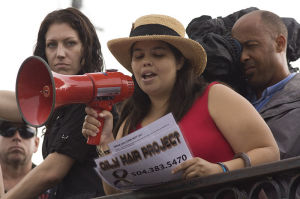 End with a Clincher

Earlier in this section when we discussed introductions, it was argued that stories are quite possibly the most effective form of introduction: Stories appear to be almost “hard-wired” into our individual and cultural make-up; and stories have a built-in structure. Stories, then, also make excellent conclusions, and can be used as conclusions in at least two ways. First, you can complete the story that you started in the introduction. Remember: You stopped right before the climax or denouement, and now, you can finish the story. Alternatively, you can retell the story, and this time the story will reflect what the audience has learned from your speech. Either method provides coherence and closure to the story and the speech.

Humor also remains an effective type of conclusion, but the same dangers with the use of humor discussed in the section on introductions applies to the conclusion. Still, effective use of humor leaves the audience in a receptive frame of mind, and, so long as the humor is relevant to the speech, provides a positive reminder to the audience of the main purpose of the speech.

I appeal to you, my friends, as mothers: are you willing to enslave your children? You stare back with horror and indignation at such questions. But why, if slavery is not wrong to those upon whom it is imposed? ~ Angelina Grimke

Since the conclusion comes at the end of the speech, it is appropriate to leave the audience with an appeal or a challenge (or a combination of the two). Similar in nature, appeals and challenges primarily divide by tone. Appeals are generally phrased more as requests, while challenges can take on a more forceful tone, almost ordering or daring audiences to engage in thought or action. 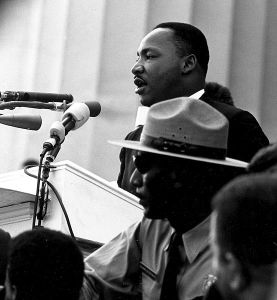 One of the most historically memorable and effective conclusions that utilized appeal and challenge was Dr. Martin Luther King Jr.’s I Have a Dream speech.