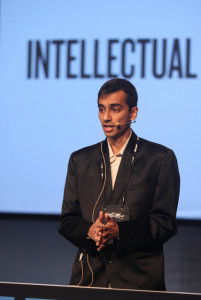 First impressions count. Carlin Flora, writing in Psychology Today, recounts an experiment in which people with no special training were shown 20- to 32-second video clips of job applicants in the initial stages of a job interview. After watching the short clips, the viewers were asked to rate the applicants on characteristics including self-assurance and likability—important considerations in a job interview. These ratings were then compared with the findings from the trained interviewers who spent 20 minutes or more with the job applicants. The result: The 20- to 32- second ratings were basically the same as the ratings from the trained interviewers.[2]

When we stand in front of an audience, we have very little time to set the stage for a successful speech. As seen from the example above, audience members begin evaluating us immediately. What we sometimes forget since we are so focused on the words we have to say is that we are being evaluated even before we open our mouths.

He has the deed half done who has made a beginning. ~ Horace