3.7 Accounting in the Headlines

Would job order costing or process costing be used by the Smarties Candy Company? 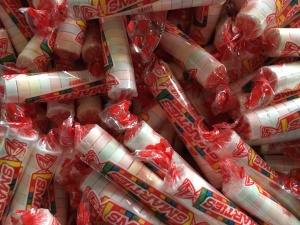 Smarties come in six flavors: white (orange crème), yellow (pineapple), pink (cherry), green (strawberry), purple (grape), and orange (orange). Smarties are gluten free and vegan and have 25 calories per roll of 15 candies. The main ingredient in Smarties is dextrose, a form of sugar.The Smarties Candy Company, founded in 1949, makes its Smarties candy in a New Jersey plant.  Its founder bought gunpowder pellet machines after World War I and repurposed them to make the tablet-shaped candies. Smarties are made by color in large batches and then dumped together to be sorted by machines into rolls and packs.

Three granddaughters of the original founder of Smarties now run the company and have been working to improve efficiency. Their chief mechanic designed a faster candy press and a new wrapper machine.  Previously, 125 Smarties rolls could be wrapped per minute; now 200 rolls can be wrapped per minute.

Smarties are produced 24 hours a day. (You can see a short video clip about Smarties and the production process at http://www.fyi.tv/shows/food-factory-usa/videos/these-women-have-business-smarties .)

The Smarties Candy Company has its one main product that is likely to account for most of its sales, but recently it has introduced Smarties ‘n creme, which are tablets that are about the size of a quarter and have a flavor burst that is half fruit (strawberry, blueberry, raspberry, peach, or orange) and half cream (dairy-free.)

BUOL 534 •  University of the Cumberlands

3. Which of the following is most associated with managerial account.docx

MANAGERIAL BUS 5110 •  University of the People