5.6 Break - Even Point for a single product

A company breaks even for a given period when sales revenue and costs charged to that period are equal. Thus, the break-even point is that level of operations at which a company realizes no net income or loss.

A company may express a break-even point in dollars of sales revenue or number of units produced or sold. No matter how a company expresses its break-even point, it is still the point of zero income or loss. To illustrate the calculation of a break-even point watch the following video and then we will work with the previous company, Video Productions.

Recall that Video Productions produces DVDs selling for $20 per unit. Fixed costs per period total $40,000, while variable cost is $12 per unit.  We compute the break-even point in units as:

Video Productions contribution margin per unit is $ 8 ($ 20 selling price per unit - $ 12 variable cost per unit). The break even point in units would be calculated as:

Look at the cost-volume-profit chart and note that the revenue and total cost lines cross at 5,000 units—the break-even point. Video Productions has net income at volumes greater than 5,000, but it has losses at volumes less than 5,000 units. 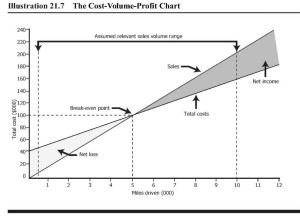 That is, for each dollar of sales, there is a $ 0.40 left over after variable costs to  contribute to covering fixed costs and generating net income.

The break-even volume of sales is $ 100,000 (can also be calculated as break even point in units 5,000 units x sales price $ 20 per unit). At this level of sales, fixed costs plus variable costs equal sales revenue, as shown here:

This means that sales volume could drop by 16.67 percent before the company would incur a loss.

You can also use this same type of analysis to determine how many sales units or sales dollars you would need to make a specific profit (very helpful!).  The good news is you have already learned the basic formula, we are just changing it slightly.  The formulas we will need are:

Let's look at another example. The management of a major airline wishes to know how many seats must be sold on Flight 529 to make $8,000 in profit. To solve this problem, management must identify and separate costs into fixed and variable categories.

The fixed costs of Flight 529 are the same regardless of the number of seats filled. Fixed costs include the fuel required to fly the plane and crew (with no passengers) to its destination; depreciation on the plane used on the flight; and salaries of required crew members, gate attendants, and maintenance and refueling personnel.  Fixed costs are $12,000.

The sales dollars required could be calculated as break even units of 200 tickets x $125 sales price per ticket = $25,000 or by using the following formula:

Management can also use its knowledge of cost-volume-profit relationships to determine whether to increase sales promotion costs in an effort to increase sales volume or to accept an order at a lower-than-usual price. In general, the careful study of cost behavior helps management plan future courses of action.

5.6 Break - Even Point for a single product _ Managerial Accounting.pdf

Answer The break-even point in units is found by setting profit to zero using the profit equation..p

In calculating the break-even point for Kayaks-For-Fun, we must assume the sales mix for the River.p

COST VOLUME PROFIT MODEL, THE BREAK -EVEN POINT AND THE.pdf

Establishing Break Even Point in Units.docx

The break even point and contribution margin is not only important in the Cost.docx