Since fixed overhead cost is given to each unit produced under the absorption costing method, the 1,000 units remaining in inventory carry forward some of May's fixed costs into the next period.  The variable costing method treats the fixed overhead as relating to May only and not to any specific units.  Ending inventory would be calculated as:

These differences are due to the treatment of fixed manufacturing costs. Under absorption costing, each unit in ending inventory carries $0.60 of fixed overhead cost as part of product cost. At the end of the month, Bradley has 1,000 units in inventory. Therefore, ending inventory under absorption costing includes $600 of fixed manufacturing overhead costs ($0.60 X 1,000 units) and is valued at $600 more than under variable costing. 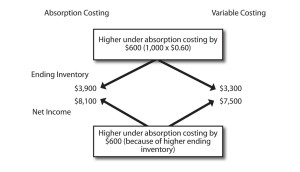 Variable costing is not currently acceptable for income measurement or inventory valuation in external financial statements that must comply with generally accepted accounting principles (GAAP) in the United States. However, managers often use variable costing for internal company reports.  Here is a video comparing the two methods:

2.  Income statement formats are different under each method (both use units sold for variable expenses):

3.   Net income on the two reports can be different if units produced do not equal units sold.