There are four basic cost behavior patterns: fixed, variable, mixed (semivariable), and step which graphically would appear as below.

The relevant range is the range of production or sales volume over which the assumptions about cost behavior are valid.  Often, we describe them as time-related costs.

A graph depicting the relevant range would look like this:

Fixed costs remain constant (in total) over some relevant range of output. Depreciation, insurance, property taxes, and administrative salaries are examples of fixed costs. Recall that so-called fixed costs are fixed in the short run but not necessarily in the long run.

For example, a local high-tech company did not lay off employees during a recent decrease in business volume because the management did not want to hire and train new people when business picked up again. Management treated direct labor as a fixed cost in this situation. Although volume decreased, direct labor costs remained fixed.

Mixed costs have both fixed and variable characteristics. A mixed cost contains a fixed portion of cost incurred even when the facility is idle, and a variable portion that increases directly with volume. Electricity is an example of a mixed cost. A company must incur a certain cost for basic electrical service. As the company increases its volume of activity, it runs more machines and runs them longer. The firm also may extend its hours of operation. As activity increases, so does the cost of electricity.

A step cost remains constant at a certain fixed amount over a range of output (or sales). Then, at certain points, the step costs increase to higher amounts. Visually, step costs appear like stair steps.

Supervisors’ salaries are an example of a step cost when companies hire additional supervisors as production increases. For instance, the local McDonald’s restaurant has one supervisor until sales exceed 100 meals during the lunch hour. If sales regularly exceed 100 meals during that hour, the company adds a second supervisor. The supervisor costs will remain the same for between 0 - 100 meals served that hour.  When meals served are between 101 - 200, the supervisor cost goes up to reflect 2 supervisors. Step costs will increase by the same amount for each new cost or step.  Step costs are sometimes labeled as step variable costs (many small steps) or step fixed costs (only a few large steps).  In graph form, a step cost would appear as: 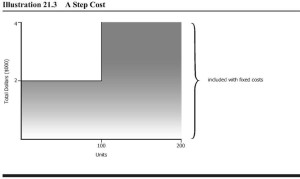 Although we have described four different cost patterns (fixed, variable, mixed, and step), we simplify our discussions in this chapter by assuming managers can separate mixed and step costs into fixed and variable components using cost estimation techniques.

One way to deal with a curvilinear cost pattern is to assume a linear relationship between costs and volume within some relevant range.  Within that relevant range, the total cost varies linearly with volume, at least approximately. Outside of the relevant range, we presume the assumptions about cost behavior may be invalid.

Costs rarely behave in the simple way that would make life easy for decision makers. Even within the relevant range, the assumed cost behavior is usually only approximately linear. As decision makers, we have to live with the fact that cost estimates are not as precise as physical or engineering measurements.

MANAGERIAL BUS 5110 •  University of the People

ECON 1 •  The Islamic University of Gaza

COB 213 •  Adventist University of the Philippines